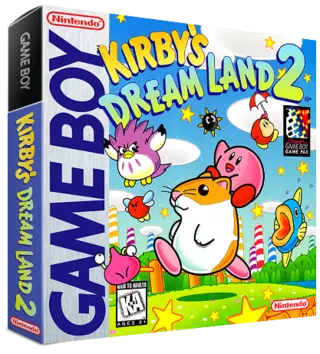 Gaming has a rich history that spans multiple decades. To this end, The Last Word on Gaming Backlog is a series that looks back on titles across all generations. From the golden 8-bit era to the landscape-changing 64-bit scene and beyond, The LWOG Backlog’s aim is history. Revisit the brick-shaped Game Boy with a sequel title that expanded on everything that the original brought to the table – Kirby’s Dream Land 2.

Among fans of the series, it’s a commonly shared sentiment that Kirby belongs on handhelds. This past June, on Last Word on Gaming, we took a look at Kirby’s Adventure for the Nintendo Entertainment System. Not only did it refine the mechanics established in Kirby’s Dream Land for the Game Boy but implemented its own concepts, many of which are used to this day. These would be brought over into the second Game Boy title in the series. Enter Kirby’s Dream Land 2, developed by HAL Laboratory and published by Nintendo. Kirby’s Dream Land 2 would release in 1995 worldwide.

This was a major Game Boy title at the time of its release. This wasn’t to say that everyone’s favorite pink puffball with an appetite was persona non grata – such titles as Kirby’s Pinball Land for the Game Boy and Kirby’s Dream Course for the Super Nintendo came out beforehand – but it was clear that a more traditional adventure was desired. Kirby’s Dream Land 2 became one of the few examples, in gaming or otherwise, in which the follow-up proved superior to its predecessor. How does Kirby’s Dream Land 2 fare in 2021? Let’s take a deeper look.

The main antagonist of Kirby’s Dream Land 2 isn’t King Dedede, as was the case with the first Game Boy title. Rather, the main threat is Dark Matter, who stole the Rainbow Bridges, which help connect the seven Rainbow Islands in the game. As Kirby, the player must traverse the islands in question, defeating threats and restoring the bridges. This time, however, he isn’t alone, as he is joined by a cast of animal friends that will help ensure the sanctity of Dream Land.

Narratives in the Kirby series are known for being innocent and lighthearted on the surface, all the while presenting stakes that encourage the player to keep going. Kirby’s Dream Land 2 is no exception, and while its story may not be overly detailed, it’s buoyed by a cast of new characters, which we will get into later. Furthermore, depending on how much of the game is completed, the game opens up that much more.

For the first time, on a handheld, Kirby can inhale enemies and copy many of their abilities. This mechanic was introduced in Kirby’s Adventure and it made a welcome return in this second Game Boy romp. Playing the game the first time, it’s interesting to see how different abilities function, in addition to the ways they can be used to defeat enemies and solve puzzles. Though there are only 7 abilities in total, one can argue this number is multiplied several times over thanks to Kirby’s animal friends, all of whom make their debuts in Kirby’s Dream Land 2.

Assisting Kirby in his quest for justice are Rick the Hamster, Coo the Owl, and Kine the Fish. By defeating mid-level bosses or simply finding them in levels, Kirby can partner with any one of these three animal friends, each with their own strengths. For example, Rick moves fast on the surface and maintains traction on ice, Coo specializes in flying at rapid speeds, and Kine can swim in even the most treacherous waters. Moreover, Kirby’s Copy Abilities carry over when partnering with his animal friends, allowing said abilities to be used in entirely new ways. This further incentivizes players to experiment with various possibilities.

Kirby’s Dream Land 2 is one of the many examples of a developer taking the limited hardware of the Game Boy and maximizing it. While Kirby may not be the most complex video game protagonist, he is incredibly expressive through the small screen, adding to his likability. Every detail in Kirby’s Dream Land 2, from the areas our hero traverses to the enemies he encounters, is accounted for. When playing the game via Super Game Boy, there is much more to see.

For the uninitiated, the Super Game Boy was a peripheral for the Super Nintendo that allowed people to play Game Boy games on the home console. Select Game Boy titles were optimized with the Super Game Boy in mind, providing them with unique color palettes and borders. These included, but weren’t limited to, Donkey Kong ’94 and Pokemon Red, Blue, and Yellow. Kirby’s Dream Land 2 was no exception, as it featured not only a unique border but colors that matched the various levels and even additional sounds that weren’t present on the Game Boy.

In terms of audio composition, Hirokazu Ando returns from Kirby’s Adventure, helping to craft a soundtrack that perfectly captures Kirby’s Dream Land 2‘s mood. The other individual credited with composition is Tadashi Ikegami. Other roles credited to Ikegami include sound designer for the original Pokemon Snap and composer for Kirby Air Ride. Not unlike other games in the Kirby series, Dream Land 2 knows when to be whimsical, as well as how to capture tension through sound. Simply put, its soundtrack is solid.

Even with a greater number of levels, Kirby’s Dream Land 2 isn’t a long game if one aims for a straight shot to the end. A speed run may not take a seasoned player any longer than 2 hours if that. With that said, to receive the true ending, the player must collect all the Rainbow Drops. On each island, there is a Rainbow Drop that can be collected by using the right Copy Ability, as well as the appropriate animal friend if need be. To receive the true ending, Kirby’s Dream Land 2 can last a player for much longer. Furthermore, by completing the game 100%, a new Option mode is unlocked, providing such additions as a boss battle mode, adding to the game’s overall value.

Unsurprisingly, Kirby’s Dream Land 2 was heavily praised following its release. It sold over 2.3 million units during its time on the market and critics praised it for taking the established Kirby formula and pushing it forward on the Game Boy. This remained the final traditional side-scrolling Kirby game on a handheld for some time. Kirby’s Dream Land 3, which was released in 1997, was an SNES title. Players waiting for a handheld Kirby game, in that beloved side-scrolling style, would have to wait until 2002; this was when Kirby: Nightmare in Dreamland, a remake of Kirby’s Adventure, hit the Game Boy Advance.

Kirby’s Dream Land 2 would see life in other ways outside of the Game Boy. It was among the various Virtual Console titles for the Nintendo 3DS, releasing on the platform in Japan and Europe in 2012 before making its way to North America in 2013. It was also one of many titles included in Kirby’s Dream Collection for Wii. While it may not be the most sophisticated Kirby game on a portable platform, there’s no denying the charm and quality Kirby’s Dream Land 2 boasts.