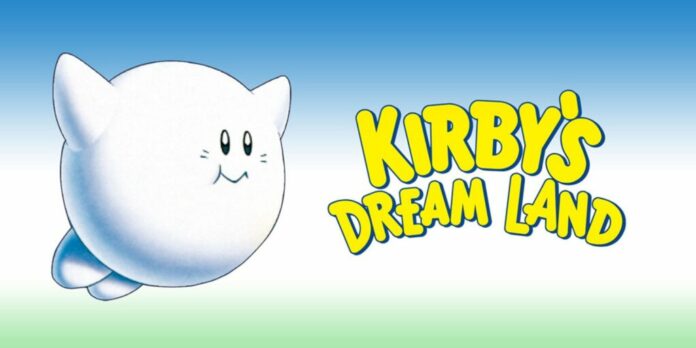 Gaming has a rich history that spans multiple decades. To this end, The Last Word on Gaming Backlog is a series that looks back on titles across all generations. From the golden 8-bit era to the landscape-changing 64-bit scene and beyond, The LWOG Backlog’s aim is history. Continuing our look at handhelds, this time, we look at a title that started a cozy, lovable series – Kirby’s Dream Land for the Game Boy.

Among the litany of Nintendo franchises, Kirby is perhaps the friendliest. The games featuring the spherical, pink hero are relatively simple; easy for novices to enjoy yet still deep enough to entertain seasoned gamers. Furthermore, Kirby has been a franchise where experimentation has been rampant, from standard platformers to pinball-style romps to puzzle titles and beyond. Since his introduction in 1992, Kirby has become one of the most beloved characters in gaming. This all started with the original Kirby’s Dream Land released on the Game Boy.

Kirby’s Dream Land was developed by Masahiro Sakurai of HAL Laboratory. Sakurai would go on to become closely associated with the Super Smash Bros. franchise. Meanwhile, HAL would be responsible for developing future Kirby titles, in addition to other classics such as Earthbound. Sakurai designed Kirby’s Dream Land with the goal of creating a laid-back platformer anyone could enjoy. This simplicity even trickled down to the design of Kirby himself. While his rounder, basic design we associate with him now was originally a placeholder for a more detailed character, the game’s designers grew so fond of him that the former design remained. It’s difficult to imagine this series with any other mascot.

In another interesting piece of trivia, on the Kirby’s Dream Land box in North America, Kirby is entirely white. While Sakurai wanted the titular to be pink, Shigeru Miyamoto believed he should have been yellow. Ultimately, Sakurai’s decision won out. Kirby’s Dream Land wasn’t the first Game Boy title from HAL Laboratory, either. In the years prior, they released Revenge of the Gator, Shanghai, Ghostbusters II, and Trax. However, up until this point, Kirby’s Dream Land was their most memorable outing on the platform.

On the isle known as Dream Land, inhabitants live in peace. Late one night, however, the inhabitants are shocked and horrified when the gluttonous King Dedede and his minions swoop in to steal all their food. In addition, they’ve claimed the Sparkling Stars used in harmony with the heavens. In response to this nefarious behavior, a short, rotund being named Kirby steps up to the challenge. He vows to bring back their food and Sparkling Stars, putting an end to Dedede’s terror in the process.

Kirby’s Dream Land doesn’t feature the most memorable story, but it did well in establishing various elements of the Kirby franchise. Among these was Dream Land itself and King Dedede as an antagonist, who would also go on to play a protagonist in future titles. For a game this simple, a complex narrative isn’t necessary. It does exactly what it needs to do: push the game forward and encourage the player to complete the levels laid out in front of them.

As far as 2D platformers are concerned, Kirby’s Dream Land is both by-the-books and inventive in its own way. The game is comprised of five levels that Kirby must jump and traverse through, defeating enemies along the way. The main method of combat that Kirby possesses is inhalation; by holding down the B button, he can inhale enemies and blocks before firing them back as projectiles. Keep in mind that his trademark copy ability isn’t present here; the spherical protagonist would debut said ability in Kirby’s Adventure on the NES one year later.

Another key ability of Kirby’s is flight. By jumping and holding up on the Control Pad, Kirby can fly for an infinite amount of time. This can make certain levels even easier, but it doesn’t always come in handy. This is especially true in areas where foes are airborne or spikes appear from the ceiling, meaning that one cannot simply fly forever. Furthermore, when in flight, Kirby can only exhale, not inhale, which limits his range of combat.

The Kirby series has been known to be on the easy side and the original Kirby’s Dream Land is no exception. With that said, various power-ups exist to not only help novice players along but keep the game itself interesting. From the microphone that eliminates all enemies on screen to the mint leaf that allows Kirby to fire rapid projectiles while in infinite flight, Kirby’s Dream Land may be easy for experienced players, but it will seldom be boring.

It would be unfair to judge Kirby’s Dream Land through a modern lens. Though it was released a few years after the Game Boy hit store shelves, its details are minimal. With that said, it possesses its own aesthetic that would permeate throughout the entire Kirby franchise. The best word to use to describe Kirby’s Dream Land, in terms of visuals, would be “approachable.” From Kirby himself to the levels he explores to even many of the enemies he faces, rounder and softer features are aplenty. The lack of sharp or dynamic visuals helps make Kirby’s Dream Land friendly on the surface.

Kirby’s Dream Land is a treat in the sound department, too. Despite only being five levels long, each tune is upbeat and energetic, capturing the whimsy that the Kirby franchise is known for today. “Green Greens,” the first level of Kirby’s Dream Land, has perhaps the most memorable song in the series. “Float Islands” feels like a song one would compose for a tropical getaway. “Mt. Dedede,” the level where the nefarious king lurks, is the most intense song of the bunch and would become the king’s trademark theme to boot. Kirby’s Dream Land was composed by Jun Ishikawa of HAL Laboratory. Ishikawa would go on to compose soundtracks for several Kirby titles moving forward.

Kirby’s Dream Land stands as both the first and shortest game in the series. In the hands of a capable player, a single playthrough will last a half-hour. As stated earlier, Kirby’s Dream Land is only five levels long. While these are unique in their own ways, each with a boss battle to cap things off, the game may just be over before you know it. With that said, for an extra challenge, players will find that an extra difficulty mode is unlocked after completing the initial campaign. This new difficulty mode features more aggressive enemies and bosses with different fighting patterns, which makes Kirby’s Dream Land a heightened challenge. However, once this mode is unlocked, the player will be given a prompt for another mode that allows them to configure a future playthrough, adjusting the vitality and lives they have to work with.

The two extra modes detailed here can be unlocked at the start, though. At the title screen, holding A, Select, and Up on the Control Pad unlocks the more challenging difficulty mode. Additionally, by holding down B, Select, and Down on the Control Pad, the Configuration Mode can be accessed. Even with these modes, Kirby’s Dream Land is still a short game. However, for those that are looking for a quick platforming fix, this is a reliable option.

Kirby’s Dream Land is a fun, if not brief, romp on the Game Boy. More importantly, it sparked a series featuring Nintendo’s rotund hero with an insatiable appetite. From mainline entries to spin-off titles, Kirby has not only appeared on the Game Boy, but the NES, the SNES, the N64, and beyond. He’s also one of the Super Smash Bros. original characters, ultimately being joined by fellow series characters King Dedede and Meta Knight. Simply put, Kirby is an important part of Nintendo’s history.

Don’t let the lack of difficulty shy anyone away from the series; simply put, Kirby is meant for everyone. The games accommodate different skill levels, to be sure, but they’re still deep and enjoyable enough for anyone to get value from them. Kirby’s Dream Land established several concepts that would be built upon in subsequent titles. While unrefined compared to later entries, the original for the Game Boy is important all the same.