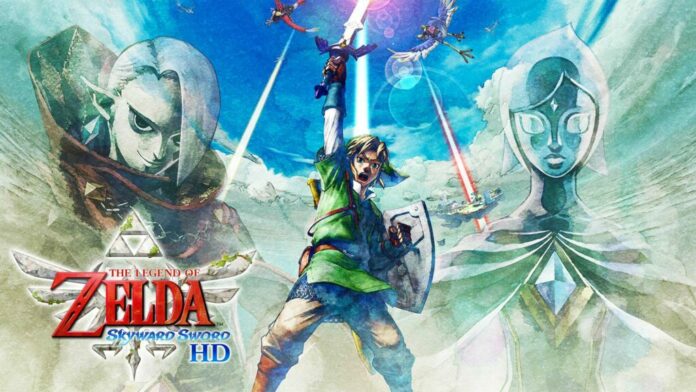 The Legend of Zelda: Skyward Sword was originally released on the Nintendo Wii in 2011. Utilizing the Wii MotionPlus accessory, this was the first Legend of Zelda game that boasted precise motion controls, allowing for more accurate swordplay. Though this title was largely positively received by critics, it remained rather divisive compared to other entries in the Zelda series. Less than a decade later, the title in question was revisited via The Legend of Zelda: Skyward Sword HD on the Nintendo Switch. The game was developed by Tantalus Media and published by Nintendo. Does this remaster, originally announced this past February, successfully breathe new life into a nearly 10-year-old game? Let’s take a deeper dive with this Skyward Sword HD review.

Mechanically and philosophically speaking, The Legend of Zelda: Skyward Sword HD is largely identical to its Wii counterpart. As the series’ iconic main character, Link, the player is tasked with rescuing long-time friend, Zelda This is an adventure that takes him from his home in the sky, known as Skyloft, to the surface below, as he overcomes multiple threats and develops strength, Link slowly realizes his destiny as a hero. The game is buoyed by colorful characters ranging from the enigmatic Ghirahim to the fan-favorite brute known as Groose. Simply put, if one played the Wii version, the Switch remake is largely the same.

Another area where Skyward Sword shines is in its dungeon areas. In fact, many long-time Zelda fans claim that this game features some of the best in the entire series. The Sandship, for example, may be the most creative, as its use of Timeshift Stones allows Link to travel to different periods in time to solve said ship’s various puzzles. The Ancient Cistern, Skyward Sword‘s water-themed dungeon, features a stark contrast between pristine architecture and its dreary, unsettling underbelly. These are just a few dungeon areas the game boasts and, through its improved graphical fidelity, Skyward Sword HD makes them feel more alive.

A bump in resolution and increased frame rate aren’t the only areas where The Legend of Zelda: Skyward Sword HD improved upon the original. The game shipped with various quality of life improvements, making the game a more seamless experience. These include, but aren’t limited to, autosaving and the inclusion of three different save files. However, there are more striking refinements that change Skyward Sword‘s gameplay for the better.

One of the most notable is the inclusion of traditional button controls. While the original motion controls remain, the Joy-Con providing greater accuracy regarding sword attacks and aiming, they were divisive even back in 2011. The button controls, which is the primary way I played, provide a solid compromise to a game once deemed impossible for them. While they took time to get accustomed to, it wasn’t long until I was effortlessly pulling off spin attacks and jump slashes.

Another welcome improvement from the original is the less intrusive nature of Fi, Link’s ally in Skyward Sword. One of the most infamous elements of the original game on Wii was Fi’s insistence on providing hints on even the most mundane aspects of gameplay. For example, no matter how many times a player booted up the Wii game, Fi would tell them that a blue rupee was worth 5 rupees anytime one was picked up. Not only does Skyward Sword HD eliminate this, but many of her hints are now optional, accessible by pressing down on the D-Pad. Fi’s subdued hand-holding nature in Skyward Sword HD may not seem like a tremendous selling point, but one will be surprised by just how much snappier the game feels as a result.

Skyward Sword HD‘s other smart inclusion is a free camera. One of the shortcomings of the Wii version was that the player could not freely move the camera; they could only snap it behind Link to reorient the view. Now, on Switch, the player can easily move the camera so that they can better survey their surroundings. In my experience, this was especially useful during the Trial Gate segments, as the camera allowed me to better chart my path and craft strategies to complete the different trials. The free camera makes the user experience all the more refined.

While The Legend of Zelda: Skyward Sword HD improves upon the original in virtually every way, a few of the game’s shortcomings from a decade prior remain. Case and point, the sky itself. Though this overworld is accompanied by a sweeping orchestral track, it doesn’t change the fact that the overworld in question feels barren. Even back in 2011, critics noted just how little there was to do outside of traveling to the surface areas. The magic of traversing the sky wears thin quickly. One would assume that Skyward Sword HD could have improved upon this, whether by improving the speed of Link’s Loftwing to move from point A to point B faster or incorporating new landmarks and points of interest to give the overworld more substance.

From Scaldera to Koloktos to Ghirahim in his various forms, Skyward Sword HD has more than a few memorable bosses. The most controversial, however, has to be The Imprisoned. Throughout the game, the player is tasked with fighting this towering creature three times, implementing a slightly revised strategy for each. In the eyes of many Zelda fans, myself included, these fights are tedious and do little to enhance the overall experience. Given The Imprisoned’s status as a critical character in the game, perhaps these battles could have been condensed so that they don’t overstay their welcome. In any event, when The Imprisoned arrives, it’s as if the game screeches to a halt.

This doesn’t even begin to touch on the controversy regarding the Zelda and Loftwing Amiibo, which was released alongside Skyward Sword HD. Priced at $24.99 at retail, by using this Amiibo in-game, the player could freely travel from the surface to the sky without having to rely on a Bird Statue. However, given the fact that this remaster was already priced at $59.99 – $10 more than the Wii original, mind you – locking a quality of life feature behind a collectible that’s been scalped into oblivion seems like a shady tactic. This was a feature that should have been included in the base game.

The Trial Gates, which lead to the Silent Realm areas, can be considered a collective downside depending on one’s perspective. Stripping the player of their weapons and items and tasking with them finding multiple Sacred Tears, all the while having them avoid imposing Guardians, can be stress-inducing. These areas are not exactly built for those predisposed to anxiety. However, unlike the multiple Imprisoned battles, it’s difficult to imagine how these Silent Realm areas could be improved without completely changing the game itself. In my experience, revisiting them on Switch, especially with the aforementioned free camera, is less painstaking than on Wii. Just be cautious and don’t become discouraged if you have to retry certain Trial Gates.

Despite the game’s shortcomings, it’s difficult to deny that The Legend of Zelda: Skyward Sword HD is the best way to play what’s considered the origin point of the entire series. Going back to replay this adventure on Switch, I found myself enjoying it much more. While I completed the Wii version roughly a decade ago, I was never motivated to replay it in the same way that I have other titles including The Legend of Zelda: Ocarina of Time, A Link to the Past, and the first Breath of the Wild. Skyward Sword had multiple quirks that the remaster smooths out or eliminates completely.

In fact, between this, the Link’s Awakening reimagining on the same platform, and the Wind Waker and Twilight Princess remakes that landed on Nintendo Wii U, it begs the question: what other Zelda titles could benefit from remasters? Rumors have been circulating about such titles as Oracle of Ages and Oracle of Seasons being revisited, though, with any rumors in the gaming industry, these should be taken with a grain of salt. In regard to this Skyward Sword HD review, given the game’s improvements, shortcomings, and all, the game comes highly recommended.