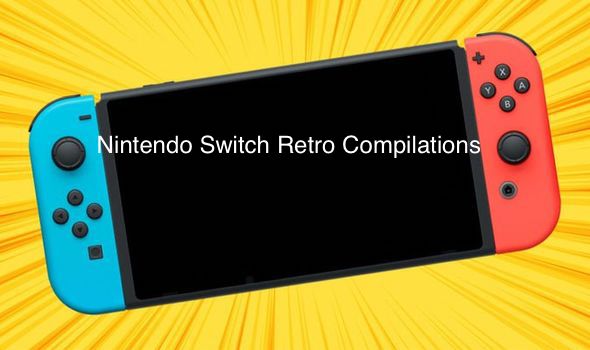 Redistributing older games on newer platforms isn’t a new practice. This dates back several console generations, even before CDs became the standard. It can be argued that Nintendo’s Virtual Console, which started with the Wii, kicked this trend into overdrive. Simply put, it provided players with a treasure trove of classic content. Since the Virtual Console service faded following the Nintendo 3DS and Wii U, opportunities arose for companies to release classic content on their own. This brings us to the topic of retro compilations on Nintendo Switch and, more importantly, which ones you should try.

Before going through the various retro compilations on Nintendo Switch, it’s important to determine what “retro” is defined as. In the case of this piece, “retro” refers to anything predating the seventh generation of video game systems; in other words, anything before the Wii, PlayStation 3, and Xbox 360. With this in mind, as solid of packages as they are, Bioshock: The Collection and Borderlands Legendary Collection won’t be discussed.

Furthermore, this list will only contain titles that are commercially available today, whether physically or digitally via the Nintendo eShop. This means that Super Mario 3D All-Stars is out of the running as well. Despite this, there are many retro compilations on the system. Let’s begin with two included in every Nintendo Switch Online subscription.

From the proverbial ashes of the Virtual Console arose two retro compilations on Nintendo Switch. Currently boasting over 100 games across both the NES and SNES, these games are included in every Nintendo Switch Online subscription. These aren’t straight ports, either. They include features such as the ability to save anywhere and rewind progress. Certain multiplayer titles, including River City Ransom and Super Mario Kart, can be played online with friends as well.

Nintendo Switch Online has never been perfect, though, and this also applies to its selection of NES and SNES titles. Chief among the current issues is the fact that these services are updated at a sluggish pace. Only once in a few months are they updated. Additionally, when new games dropped, the updates are often received poorly by subscribers. It’s difficult to argue value, as these games are included with every online membership. Furthermore, many of the games offered, particularly those on SNES, have aged quite well. There’s plenty to replay or experience for the first time.

If classic Nintendo titles aren’t for you, perhaps you were more of a Sega person back in the day. Originally released in 2010 across multiple parts, Sega Genesis Classics contains a series of titles originally for Sega’s 16-bit console. On modern home consoles, Nintendo Switch included in 2018, the complete edition of this compilation was released. With over 50 titles, from the original Sonic the Hedgehog to the Golden Axe series to ToeJam & Earl, many of the console’s defining titles are represented.

This isn’t one of the perfect retro compilations on Nintendo Switch, though. Certain Genesis titles, such as Sonic the Hedgehog 3 and Sonic & Knuckles, are absent from Sega Genesis Classics. Furthermore, there isn’t much in the way of historical content, such as a history of the Sonic series or concept art of the games represented in Sega Genesis Classics. However, with a charming user interface and the ability to rewind, the latter not unlike the Nintendo Switch Online titles, this is a compilation worth having in your Switch collection regardless.

Stepping over to a more obscure company, SNK may have one of the best retro compilations on Nintendo Switch. SNK is perhaps best known for its series of console and arcade titles, Crystalis, Ikari Warriors, and Psycho Soldier included. These are included in the 20-plus titles for SNK 40th Anniversary Collection, which was released for the Nintendo Switch in 2018. This collection originally came with 13 games, though it received subsequent additions via free DLC. While the titles included are at the very least interesting, its presentation is most notable.

The Museum section is where SNK 40th Anniversary Collection shines. Boasting artwork, trivia, and a soundtrack, this section provides an effective background on the collection’s various titles. The guidebook scans and advertising materials are especially interesting, as these aren’t widely available. Throw in a healthy amount of in-game achievements and this collection is nothing short of well-rounded. SNK may not be the most recognizable name in gaming, especially compared to Sega or Nintendo. Despite this, the sheer effort put into SNK’s collection makes it one of the best retro compilations on Nintendo Switch.

In addition to the eight games compiled here, Castlevania Anniversary Collection features a Bonus Book. This e-book provides box and concept art, as well as other illustrations, which makes it an interesting piece of Castlevania history. With that said, there aren’t many other options to speak of. Unlike the other retro compilations on Nintendo Switch here, there is no rewind feature to speak of. Additionally, each game is only afforded a single save state. Given rumblings of a future Castlevania Advance Collection, hopefully, Konami will learn from the shortcomings here and build upon what already works.

When discussing fighting games, Street Fighter is legendary. With a series whose history dates back to the Commodore 64 and Amiga platforms, there is plenty to learn and experience. Perhaps the best way to do this, on modern consoles, is with Street Fighter 30th Anniversary Collection. Released in 2018, this retro compilation on Nintendo Switch features 13 Street Fighter arcade games, special editions and updates included. From online multiplayer to an exclusive tournament mode for Super Street Fighter II, single-player and competitive offerings are present.

Street Fighter 30th Anniversary Collection isn’t short on supplementary content, either. Like other entries on this list, this compilation features a museum section. This contains concept art and documents, offering further insight into the games offered. There are also character biographies and even an interactive timeline of the series itself, satiating the appetites of Street Fighter historians that much more. While not all the games included are winners – only a handful support online play, including Super Street Fighter II: Turbo and Street Fighter Alpha 3 – there’s more than enough in this collection to warrant making it part of your Nintendo Switch library.

If you’re a gamer who remembers going to the arcade, sinking countless quarters into punishing multiplayer titles, Capcom Beat ‘Em Up Bundle is an effective time capsule of sorts. Released in 2018, this retro compilation on Nintendo Switch brings together seven Capcom beat ’em up arcade titles. Knights of the Round, The King of Dragons, and Final Fight are just a few of the titles represented here. They can also be played solo or via local or online multiplayer, though the latter’s performance has been known to dip when multiple people join in.

With that said, Capcom Beat ‘Em Up Bundle excels in bonus features. Each title has an English and Japanese version that can be accessed. Furthermore, each game can be made more approachable due to different difficulty settings. Each game allows for credits to be added at any time; there is no quarter-munching to be seen here. Throw in a bonus gallery for good measure and Capcom Beat ‘Em Up Bundle is one of the more affordable, well-rounded retro compilations on Nintendo Switch.

Classic Mega Man representation is far from scarce on modern consoles. From Mega Man X to Mega Man Zero/ZX, Capcom’s iconic action platforming series is nigh ubiquitous. However, when it comes to the retro compilations to play, one would be wise to start with the first Mega Man Legacy Collection. Originally released in 2015, Mega Man Legacy Collection found its way onto Nintendo Switch in 2018. Given that Mega Man‘s legacy began under the Nintendo umbrella, this collection of the original 6 NES games feels right at home on the hybrid console.

This doesn’t even begin to touch on the various other retro compilations on Nintendo Switch not mentioned here. Atari Flashback Classics, Dragon’s Lair Trilogy, Collection of Mana, and Space Invaders Invincible Collection are just a few of the numerous compilations that harken back to gaming’s past. These collections vary in terms of quality, as one may imagine. On the flipside, this speaks volumes about the sheer degree of vintage content the Switch offers. Whether you’re looking to relive games from your childhood, experience classics for the first time, or simply build out your Switch library, you won’t be short on options.