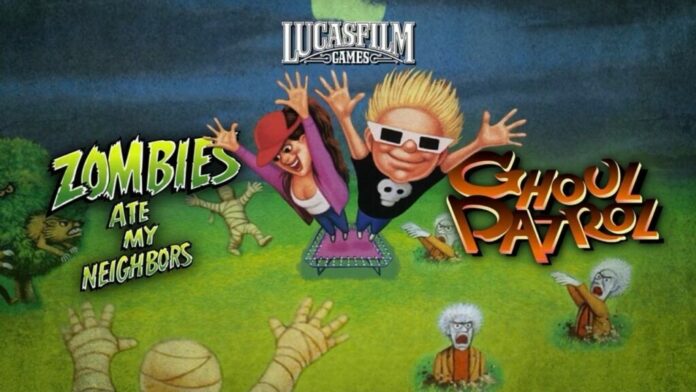 Earlier this week, fans of the 16-bit era of gaming were treated to a surprise announcement. It was been confirmed that Zombies Ate My Neighbors and its sequel title, Ghoul Patrol, will see new life on the Nintendo Switch, PlayStation 4, Xbox One, and PC. This project will be managed by Dotemu, the developer of such retro-inspired titles as last year’s Streets of Rage 4 and the upcoming Teenage Mutant Ninja Turtles: Shredder’s Revenge. This two-pack collection will be published by Lucasfilm Games, currently owned by Disney.

Originally released in 1993 for Sega Genesis and Super Nintendo, Zombies Ate My Neighbors stars protagonists Zeke and Julie, who must fight through levels of horror-themed monsters to save their neighbors. Despite its name, zombies aren’t the only enemies in the game, as players will encounter werewolves, aliens, chainsaw-brandishing menaces, and other creatures one may associate with old-school horror films. As a hard-as-nails run-and-gun title, Zombies Ate My Neighbors became a cult hit.

It was followed up by Ghoul Patrol, released the year after. Once again, Zeke and Julie are the central protagonists. This time, instead of saving their neighbors from invading monsters, they must rescue their town from a horror exhibit that was brought to life. Ghoul Patrol wasn’t originally meant as a sequel, but rather its own title that implemented the same engine. While it failed to attain the same cult status as its predecessor, Ghoul Patrol saw many of the same gameplay philosophies carried over from Zombies Ate My Neighbors.

Zombies Ate My Neighbors and Ghoul Patrol are set to hit modern platforms, as a two-pack, on June 29, 2021. Both titles will feature all levels and local multiplayer functionality, which were present in the original releases. Unique to this collection, however, are game saves, achievements, and a museum gallery featuring images and video content. It’s also worth noting that Limited Run Games will release a physical edition of this collection, with more details to follow.

As stated earlier, this announcement took many gamers by surprise. Since the 90s, outside of the Wii Virtual Console in the late 2000s, Zombies Ate My Neighbors and Ghoul Patrol have remained dormant. While they remain favorites among old-school gamers, Zombies Ate My Neighbors especially, it didn’t seem like Lucasfilm Games or Disney had any interest in revisiting them. Whether this collective rerelease is indicative of a potential third game, as a retro revival, remains to be seen. Nonetheless, it’s good news for those looking to revisit these games or experience them for the first time.

The bonus content and new features should make this rerelease enticing even for those that have played these horror-themed titles ad nauseam. The museum gallery should pique the interest of long-time fans, especially if never-before-seen content is available. The addition of game saves is also notable due to the legendary difficulty of the two games included. Needless to say, this feature will help players reach the end credits easier.