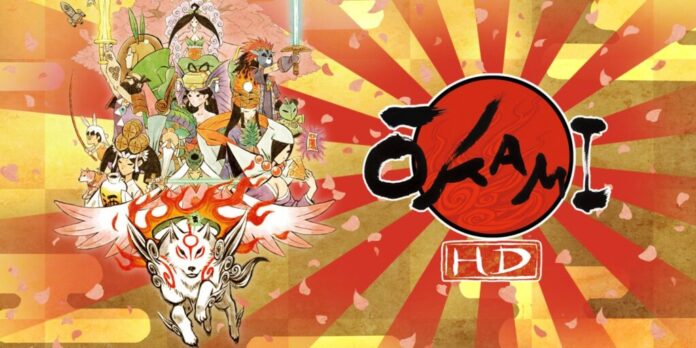 Originally released to critical acclaim back in 2006, Capcom’s Okami retains a devoted fanbase to this very day. After publishing a HD remake for the Nintendo Switch back in 2018, fans of the game now have a chance to replay the beloved classic. The only question is if this game is still the masterpiece we remember or is this wolf all bark and no bite? Let’s find out in this Okami HD review.

You can’t so much as turn on this game without admiring the unparalleled art style. Okami is heavily influenced by Japanese myth (more on that later), and the art direction reflects this inspiration. Designed using Sumi-e ink art style, every second feels like you’re moving around in an elegant Japanese painting. The soundtrack adds to this immersion, as every track in the game enhances the beautiful backgrounds and mysterious landscapes.

Historically speaking, HD remakes for games of this era can be a double-edged sword, as past developers used the physical limitations of previous hardware to mask graphical inefficiencies. For example, Nintendo’s HD remake of Super Mario Sunshine exposed several faulty backgrounds that today’s developers either didn’t notice or didn’t care enough to fix.

Fortunately, Okami does not suffer this fate. It’s clear that the developers took great care in making every last pixel of this game look as good as humanly possible. This game was an artistic wonder in 2006, and the HD remake only adds to the beauty of this world.

Okami is a story-driven game where various events and elements only become available after reaching certain plot points. While the game features a deep lore, we’ll stick to the bullet points for this review.

100 years ago, the eight-headed demon Orochi attempted to destroy Nippon. However, the white wolf Shiranui and swordsman Nagi joined forces to defeat the demon and seal away his evil. Said seal has been broken, and now it’s up to Amaterasu, the goddess of the sun in wolf form, to defeat evil once again and protect the land of Nippon.

Joining you on your quest is Issun, a small Poncle that essentially serves as Okami’s version of Navi from Ocarina of Time. Like Navi, Issun can provide help but is more often a nuisance that interrupts gameplay to give painfully obvious advice and poor dialogue. Issun’s presence is the minorest of minor complaints, but his appearance combined with an abundance of dialogue can create pacing issues. Fortunately, most of these moments can be skipped.

Of course, great graphics and story won’t matter if the moment-to-moment gameplay is unsatisfactory. However, Okami once again excels in this area, for the most part. Amaterasu controls just as well as you remember, although the short platforming sections can be a little frustrating.

The game’s primary mechanic is the Celestial Brush, a device which allows the player to draw on the screen to create a variety of obstacle-overcoming solutions. Whether it’s summoning the wind, drawing lilypads on water, or dropping bombs on combustible walls, these tools allow the developers to create a variety of clever puzzles both in the overworld and in the dungeon areas. However, several of these commands require similar brush strokes, which can lead to instances where the game misreads an input. Fortunately, these errors are few and far between and are anything but a deal-breaker.

Okami has a massive world, especially for a game that originally came out in 2006. However, despite the expansive overworld, this is very much a linear game. You can wander around if you want to, as there are hidden secrets scattered throughout the map. However, completing the game requires you follow the story as the game intends.

Puzzles and plot points need to happen in a very specific order and, as is often the case with these types of games, there are instances where you’re left looking for one specific solution and cannot progress until you find it. There is a fortune teller to help if you get stuck, but you typically have to go well out of your way to get to her.

Ultimately, Okami is just as good as you remember and well worth the price of admission. The game looks better than ever and the gameplay is still a blast. It’s obvious that the developers in charge of recreating this masterpiece took pride in their work, as there really isn’t a cut corner to be found. While there are a few annoying choices kept in from the original, the good far outweighs the bad. If adventure games are your thing, make sure to pick this game up and give it a shot.