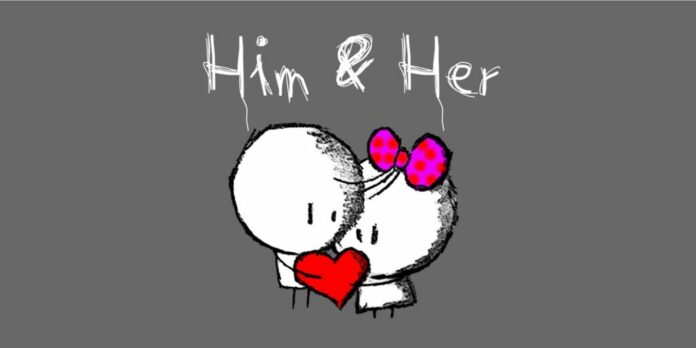 Bargain Corner returns with a dive into another game that can be found on the Nintendo Switch store for just one euro.  Him & Her is another game from Brazilian studio QUByte Interactive who made our first Bargain Corner game, Valentina.  The June 2020 release is a physics based puzzle game akin to a game like The Bridge.

The game relies on the simple use of the direction buttons, a jump button, and an action button. These simple controls are your key to solving each level and helping your character reach their lover.  The puzzles are heavily based on physics, when you walk up a wall the whole world shifts opening up new opportunities, occasional obstacles stand in your way to make this a tougher ask as the levels go on.

The mood of the game is very dim, there’s no color to the game just black and grey to depict a moody atmosphere despite the main objective of the game being about finding another person.  As you progress through the levels a sombre tune plays in the background but gets quickly repetitive and you’ll likely end up muting the sound eventually.

Him & Her is advertised by its developers as a “fast-paced hardcore platformer” but the pace of the game is much slower than this would have you believe.  Hardcore is certainly correct though as you will find yourself dying a lot by level 18.

Yes, the game controls quite well and there’s not been a single bug that we’ve run into, at times the jumping mechanic is annoying but once you get used to the little quirks like that you’ll have no issues with this game.

This depends on the player, this writer isn’t a fan of hardcore puzzle games, or any puzzle games for that matter.  If you do however like these kinds of games then this is definitely a game you could sink a number of hours into.

There are 68 different levels with two different difficulty options meaning fans of the hardcore genre will be able to have some masochistic fun and play through these levels on an even harder difficulty which would give you even more value for your one euro purchase.