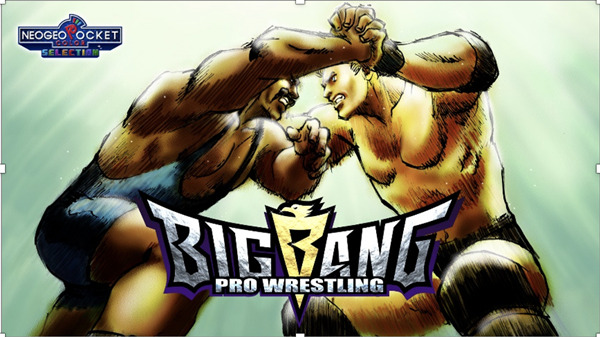 One thing that I did like about Big Bang Pro Wrestling was the overall aesthetic. It had a vision of what it wanted the wrestlers to look like, which was muscly and tough. The wrestlers even trash-talked in such a typical pro wrestling way. The entrances were well done too and made the most of the sounds and lighting available to the developers.

This game felt, for lack of any better term, very retro and exaggerated. It is an homage to an older style of a wrestling video game. One that is a far cry from the WWE 2K22s of today.

This is where my problems come in. The game is based on timing, when the wrestlers engage in a grapple it’s up to me to hit the A or B button at the right time to come out on top. I’ve played this style of game before, most notable is the Fire Pro Wrestling Series, but Big Bang Pro Wrestling was unforgiving. If I was even slightly late or early to a button press I was done for.

Beyond the grappling, there’s a limited amount of moves I can do, which got old quickly. As anyone who has ever watched wrestling knows the key to victory is hitting your finisher. That one special move that you have in your arsenal to ensure victory. The issue is, in Big Bang Pro Wrestling my finisher was almost useless. There were countless times that I would hit it, which was difficult enough given I had to press the A and B buttons at the same time to trigger it, and my opponent would just get up or kick out at 2.

So not only was it difficult to even hit my finisher, but it also never actually won me matches. And I normally wouldn’t mind that, but in a game as precise as this, it is aggravating to hit my finisher twice and still lose by tapping out to a headlock.

I appreciate some of what Big Bang Pro Wrestling brings to the table. It is a retro port that wears its influences on its sleeve. The characters and designs look really good and the layout makes it feel like I’m actually playing a New Geo Pocket console. Sadly, there are just too many great wrestling games today that do what Big Bang Pro Wrestling does, but better. Its gameplay is at times aggravating and unforgiving, while the movesets and game modes get old fast.

All in all, if you’re desperate for some old-time pro wrasslin action then the low price point of Big Bang Pro Wrestling may entice you, but it won’t occupy you for long.

What do you think of our Big Bang Pro Wrestling review?