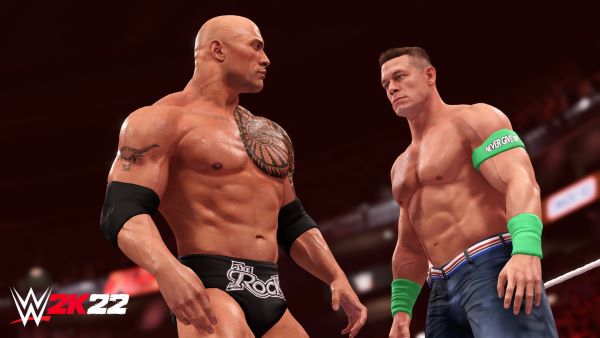 The WWE 2K series took an extended break following WWE 2K20 with an eye on revamping the series that had become less and less well-received over time. After a hiatus and a long stretch of hype, WWE 2K22 was released with a lot of fanfare. I had the pleasure of reviewing the game on Playstation 4 and as a long-time fan of WWE and WWE games, I can safely say that this game provides a very welcomed breath of fresh air to the series that could be improved upon in years to come.

One of the key taglines to WWE 2K22 was “it hits different”. It promised to redesign, rebuild, and reclaim what a pro wrestling game could look like. To me, this is the biggest positive from 2K22. The combo-based offense, different camera angles on entrances, and the focus on the action all combine to make this one of the most enjoyable. This especially shines through when playing with high fliers, something about them just looks and feels so enjoyable when playing the game.

The actual wrestling isn’t without its issues sadly, mostly with the reversal system and combo breaker buttons. At times it feels like nothing more than luck when I manage to counter my opponent by guessing they’re going to use a light attack next. It’s possible that this is something I will improve at over time but as of now the reversals just feel like a guessing game over whether I should wait for the triangle button to pop up or if I should be trying to break a combo with square or x. There are other smaller issues that long-time fans will remember with my character occasionally missing my opponent at point-blank range, especially on signature/finishing moves. In general though, as much as it occasionally frustrates me, I find the actual wrestling to be pretty fun and enjoyable, which as you can imagine is very important in a wrestling game.

Who’s That Jumping Out The Sky? A Mediocre Showcase Mode

Inherently, I like the idea of WWE games having a showcase mode. It’s a company whose history is filled with memorable moments and transcendent characters who can be showcased in such a manner. Unfortunately, Rey Mysterio isn’t the ideal candidate. When compared to other legends of the WWE Mysterio’s career isn’t filled with memorable moments, and what few he does have were omitted from the game anyway. Mysterio’s calling card has always been his great matches, his dazzling athleticism, and those aren’t something that can be adequately showcased.

Mysterio himself does a stellar job narrating through the ebbs and flows of the matches, giving meaning to everything happening, but that isn’t enough. As I mentioned earlier, some of his biggest moments and matches were excluded from the Showcase too which left me playing through random Monday Night RAW matches that nobody remembers.

Jack Tunney Would be Proud, Sort Of

One of the biggest selling points of WWE 2K22 to many was the return of GM mode. This mode has been absent from WWE games since SmackDown vs Raw 2008 despite fans calling for its return every year. 2K finally delivered and brought back the fan-favorite mode, which begs the question, was it worth the wait?

That’s a difficult question to answer. As someone who has recently played through some of the older GM modes, it was always a feature that was heavily biased towards the AI but ultimately very easy to master. The GM Mode in 2K22 falls into all the same trappings. The opposition GM can put together completely mediocre cards and still challenge my shows filled with top stars. That said, it’s still very simple to walk away with a win if you just put together rivalries, use legends, and don’t run out of money. All things that can be accomplished with relative ease, although I will say the game occasionally has major issues recognizing when I want to start a rivalry via a match, in addition, tag matches involving rivals will sometimes start a new 2 vs 2 rivalry as opposed to advancing the already established 1 vs 1 rivalries, which just shouldn’t happen.

The GM mode overall lacks the depth to keep it interesting. I can only book 3 matches per TV show, I’ve only got 2 titles, the draft pools and free agent/legends pools are small and splintered, and a lot of the productions options are just added fluff that you never need to incorporate outside of Premium Live Events. And I honestly think this is by design. The GM mode isn’t meant to be a deep experience, it’s meant to give us a bit of power to run cool matches without overcomplicating matters. Which is fine, if you’re looking for a detailed GM experience then games like TEW exist to scratch that itch.

If the WWE 2K series does continue then hopefully in future editions we can get a more fleshed-out GM mode, one that can really put a player’s skills to the test and provide an experience of the highs and lows of running a brand.

MyFACTION and Universe Mode are like the enhancement talent of WWE 2K22. Universe mode is the same as ever, if you’ve enjoyed it in the past, you’ll enjoy it now. Although the added wrinkle of letting you play as one specific wrestler is a neat new feature.

MyFACTION is a clear attempt to copy NBA 2K’s MyTeam. Such pack-based gameplay may never work in a WWE game. Wrestling is too heavily focused on the individual aspects to ever accommodate such gameplay. If 2K really wants a faction-based pack-selling mode in the games then maybe a MyFACTION that takes inspiration from FIFA’s Pro Clubs is the way to go.

As of now both modes fell tacked on to me. I understand the allure of Universe mode to some as the customization on offer allows people to build the roster and brand of their dreams using community creations of their favorite non-WWE wrestlers, but it’s never a mode I’ve taken much joy in playing.

Embed from Getty ImagesClearly an homage to The Ascension, MyRise is the head of the table in WWE 2K22. Offering the chance to play in both the men’s and women’s divisions offers instant replayability as the cast of characters to feud with or align with changes based on that choice. I liked the ability to choose what my background was in and how this would change the way others respond to me. If I had a pro athlete background then some of the independent vets treated me with disdain, but if I’d come up through the indies then I’d have some notable admirers from my time before the WWE. It’s a small touch but one that helps the world-building, and represents the various paths that real WWE Superstars take to get to where they are.

The interactions with other characters were a highlight of MyRise to me. The exaggeratedness of the smug indie veterans, the WWE superfans constantly losing their minds, getting to clap back at anyone who talked down to me. It helped to naturally build up some grudges and friendships that I could explore as the game went on.

The amount of stuff to do is also a major benefit. There are storyline opportunities everywhere you look. Want to talk to HBK and see if he’s got something for you? do it, want to talk smack on Twitter and get yourself a big match? go for it, want to dominate a brand and win gold before jumping ship? be my guest. I’ve spent hours in MyRise as both a man and a woman but it feels like I’ve only scratched the surface of all the different paths that the game has on offer.

I admit that MyRise isn’t perfect, the upgrade system is very basic and sometimes things can feel disjointed, especially if you’re a fan of a longer, more connected narrative. But it’s a really interesting and fun mode that I’ll be replaying time and again to try and explore as many divergent paths as possible.

WWE 2K22 was a necessary reset for the series. 2K endeavored to reimagine what a pro wrestling game can play like and in the process found a style of gameplay that is infinitely more enjoyable than the realistic simulation-based gameplay we’ve had in past games. It does a great job of focusing on the in-ring action while showcasing all the pizazz that comes with pro wrestling. MyRise and MyGM are welcome additions and are two modes that could be pillars of the series going forward if they continue to be improved upon. While not perfect, see Showcase/MyFACTION/slight gameplay issues, and some of the modes are admittedly lacking in depth, WWE 2K22 is a good building block for future games that offers a lot of fun gameplay.

Does The Simpsons: Hit and Run Hold Up?