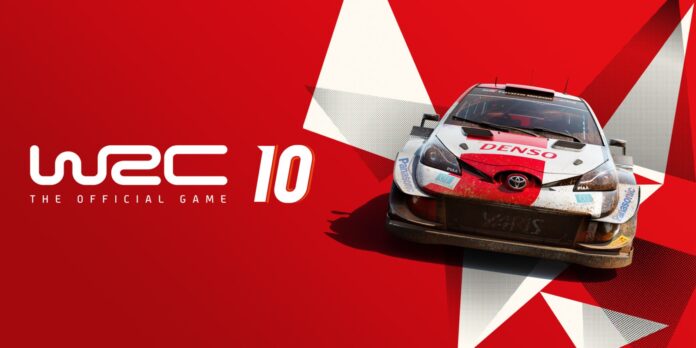 The Nintendo Switch has given us it’s fair share of decent racing games with the likes of Rush Rally, Virtua Racing and GRID – all great games in their own ways. Of course we have a certain Karting game but for once I will leave that to one side. Here we have WRC 10, the official game of the World Rally Championships featuring the 50th anniversary of the competition and that means plenty of content but that comes at a price with some graphical concessions that are just a bit too much to take as my WRC 10 Review (Nintendo Switch) reveals.

WRC 10 Review (Nintendo Switch) – The Good, The Bad and the Downright Ugly –

If you are looking for a rally game with plenty of content you have come to the right place. Right from the start there is a lot of content poured in to WRC 10. It’s predecessor WRC 9 wasn’t exactly mean with its offerings but now we have another 35 tracks to grapple with and the 50th Anniversary mode adds classic cars and courses meaning the number of hours of play time is hard for me to quantify.

Sliding an Alpine or my favourite, a Lancia around the corners is a real blast but be warned – if you are looking for a racing game where you can just put your foot down this isn’t going to be for you.

A Mode for All Seasons

WRC 10 has been developed once more with the rallying purists in mind. I initially opted for the career mode and was impressed with the amount of detail. From the garage to picking your co-pilot where you need to manage them to ensure you get the best support to learning when to change tyres and make your repairs is all here in pretty minute detail. You can repair your car in full after each stage but be careful as you can be penalised for spending too much money too soon which will cost you time in the current rally as well as damaging your relationship with your sponsors.

Once you get rallying it is quickly apparent that you need to be somewhat brilliant to succeed in this game. Just nicking an obstacle on the side of the road or veering slightly down a hump and you will be brutally punished even at novice level. You will be upside down, on your side and have no choice but to use the respawn option. I would hate to think how many times I had to use this in the first 10 hours of play alone. If you suffer with impatience then you might need to be careful as throwing the Switch out of the window starts becoming an option unless you have the persevere to learn from your mistakes. If you have that patience you will get a lot from the game.

In a turn of humour, your co-driver gets exasperated when you crash telling you to ‘get on with it’ but more amusingly advises that ‘I don’t have notes for this route’ when you hurtle off a Cliff edge and I did that a lot at first.

Tapping the accelerator, brake and hand brake are essential skills to learn and once you do you will improve steadily. Nailing a hairpin bend is a great feeling and the HD Rumble, criminally underused in my opinion in Switch games, is well utilised here. So much so that my hands were still feeling vibrations after a long session. Every bump, every crash, every slide and hard brake is felt through the joycons or Pro Controller and is another example of close attention to detail. Sadly that attention to detail has been forgotten when it comes to the games looks.

WRC 8 and 9 were both very basic games to look at and somehow WRC 10 has managed to make itself even worse to look. I mean it is ugly, ugly, ugly. The scenery is just bland , the tress and buildings have no depth to them and are grey, brown and dull. The cars panels seem to flash and flicker and the road surfaces look like they belong in a game from the PS One era. I know that the Switch is showing it’s age in terms of power and I didn’t expect next gen graphics but this is truly awful.

The game nips along at a decent 30fps as was promised and that’s great but the pop in is some of the worst I’ve seen on Switch. Pop in in the distance I can cope with but here it’s so close it can be off putting and I struggled at times to know whether to laugh or cry at just how bad it is.

Purists Will Purr, Others Will Grimace

WRC 10 is a double edged sword. Its looks really are dreadful and its difficulty is brutal. On the plus side, if you are rally fan and want the cars to handle realistically and embrace the sport itself you will find many hours of rallying to be had here. For the rest of us I would stick with something like Rush Rally Origins or even better write to SEGA and ask for Sega Rally asap.

Animal Crossing: New Horizon’s Last Update is On the Way

The SNES’ 30th Anniversary: A History and Tribute