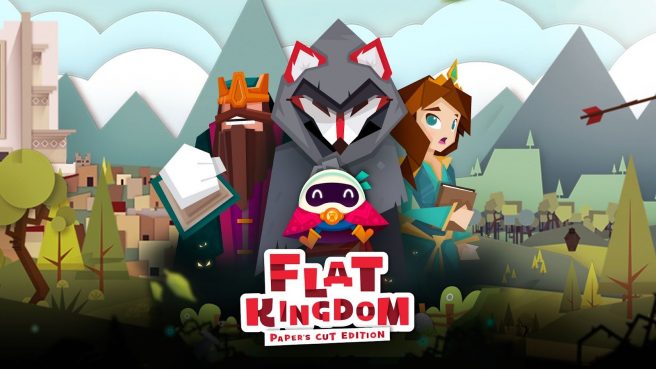 Flat Kingdom Paper’s Cut Edition has been announced by Indie publisher Ratalaika Games, in collaboration with developer  Fat Panda Games, and will release for PlayStation 4, PlayStation 5, Microsoft Xbox One,  Xbox Series X/S and Nintendo Switch is set on 1st April 2022.

Coming to all consoles, Flat Kingdom Paper’s Cut Edition was previously released on Steam PC a number of years ago, garnering scores of 8s and even higher with a number of top gaming media. Now console gamers can experience the delights of ‘The Flat Kingdom’, a beautiful and peaceful 2D land that is now threatened by an evil thief and becoming a 3D world!

Flat Kingdom is best described as an action platformer filled with puzzle-styled combat in which you’ll have to switch shapes in order to gain different abilities to progress.

Akin to rock, paper, scissors style combat, each shape beats the opposite. Sharp triangles can defeat the soft circles, heavy squares beat the fragile triangles and squishy circles can triumph over the slow squares. Both enemies and puzzles can be beaten using the correct shape and strategy, so you’ll have to observe them and come up with the best solution.

Immersive gameplay as you explore different detailed  worlds with confrontations against dangerous enemies. Huge bosses are waiting for you, but remember with three shapes you can beat them all!

A long time ago, the Flat Kingdom was threatened by the wicked Third dimension. Just when all hope was lost, a wise sorcerer appeared and created six magical jewels, keeping the dimensions stable and restoring the peace. But one day,  the masked thief Hex kidnapped the princess, also taking one of the jewels  with him. That caused the 3D chaos to come back, putting the Kingdom in serious danger again.

When everything seemed to be lost, King Square thought about the only one who could fix this mess. His name was Flat, a little but brave 2D doodle-like creature that had the ability to change shapes at will, that way he can overcome all kinds of obstacles and beat the geometric foes.

Features of
Flat Kingdom Paper’s Cut
0
Picking this one up? Let us know.x
Edition