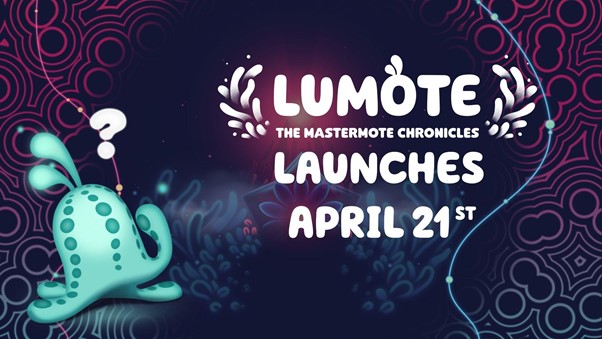 Lumote: The Mastermote Chronicles sees players squish, bop and bounce through the Great Depths – an underwater world filled with Motes; bioluminescent creatures who spend their lives deep in the Bioverse, living on the rhythms of an electronica soundscape. The game expands upon the early access PC game, Lumote – delivering a complete version of the critically acclaimed release, featuring additional story, a whole new game world and a new level of challenges, puzzles, and collectibles.

Lumote: The Mastermote Chronicles limited physical edition is available to pre-order via the Wired Productions Store. The Nintendo Switch and PlayStation 4 versions includes a double-sided folded poster, reverse inlay, a unique set of stickers featuring the bioluminescent hero, plus a digital download for the Lumote EP, and if that wasn’t enough, instructions to crochet your very own Lumote. The physical release will be available on PlayStation 4 for €19.99 / $19.99 / £15.99 and Nintendo Switch €29.99 / $29.99 / £24.99.

The Double Vinyl soundtrack for Lumote: The Mastermote Chronicles is available to pre-order now from the Wired Productions store for £35 / $45.

Lumote: The Mastermote Chronicles launches 21 April 2022 Nintendo Switch, PC, PlayStation 4, and Xbox One with a Google Stadia release to follow in 2022.