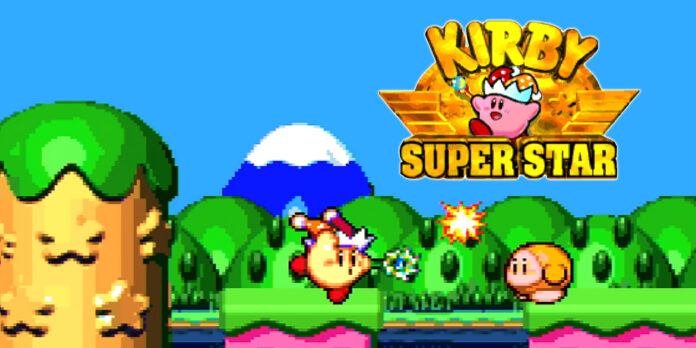 Gaming has a rich history that spans multiple decades. To this end, The Last Word on Gaming Backlog is a series that looks back on titles across all generations. From the golden 8-bit era to the landscape-changing 64-bit scene and beyond, The LWOG Backlog’s aim is history. It’s eight games in one – this time, we take a look at Kirby Super Star for the Super Nintendo.

By the mid-1990s, Kirby had become one of Nintendo’s established intellectual properties. Since the series debut in 1991 with Kirby’s Dream Land for Game Boy, the pink puffball captured the hearts of gamers across the board. Furthermore, his adventures proved to be welcoming for inexperienced players yet engaging and charming enough to keep seasoned gamers playing. To this day, the series contains over 30 titles. When discussing the fan favorites of the bunch, Kirby Super Star for the Super Nintendo can’t be overlooked.

Released in 1996 in Japan and North America and 1997 in Europe, Kirby Super Star was not the series’ first foray on the SNES. In the years prior, Kirby’s Dream Course and Kirby’s Avalanche graced the 16-bit console. However, it was Super Star that became the first side-scrolling platformer on said console. It also took a unique approach by delivering the experience in parts, making it feel like a pseudo compilation rather than a by-the-numbers platformer. Let’s take a closer look.

As mentioned earlier, Kirby Super Star is broken up into parts, each game featuring a distinct story and set of goals. Despite this, it’s easy to jump between them as many share the same gameplay mechanics, particularly the platformers. When booting up the game, one will see that many of these games are unavailable and must be unlocked by playing the other titles first. This is a smart decision that serves two purposes: to ease players into the experience and ensure that not a single title is missed during a complete playthrough.

The first main game available upon booting up Kirby Super Star is Spring Breeze, a 16-bit remake of the original Kirby’s Dream Land with more modern features, including the Copy Ability and Helper mechanic. Spring Breeze is the easiest game of the collection but is a solid introduction to what the rest of the package has to offer. From there, the player will unlock Dyna Blade, a moderately more challenging game with more proverbial meat on the bones. This level of progression, from one game to the next, remains consistent throughout Kirby Super Star. Even for the least experienced of gamers, the moment-to-moment gameplay never feels like it’s too challenging.

Revenge of Meta Knight, which tasks the player with confronting Meta Knight upon the Halberd airship, is a time-based platformer that requires the player to complete each area in as little time as possible. Milky Way Wishes is considered the “main event” game in Kirby Super Star, allowing Kirby to move freely between stages and discover abilities rather than taking them from enemies. My favorite title in Super Star, however, is Great Cave Offensive, an open-ended adventure that encourages exploration and treasure hunting, with many treasures being based on Nintendo and gaming properties. For those partial to the Metroidvania genre, Great Cave Offensive is a treat.

All of this isn’t to say that Kirby Super Star is solely comprised of traditional platformers, however. Case and point, Gourmet Race is a competitive title that pits Kirby against King Dedede as they race through 3 courses, eating as much food as possible along the way and finding the best routes to reach the finish line. Two sub-games complete the advertised “8 Games in 1” package: Samurai Kirby and Megaton Punch. While neither sub-game is particularly deep, they serve as fine reprieves from the more substantial titles in Kirby Super Star. Lastly, The Arena, which is more of a bonus, is a boss attack mode that players can use to test their mettle against Super Star’s bosses. The player will only have one life and limited health items, making this perhaps the most challenging title in the collection.

Kirby Super Star is one of the most visually appealing games on the SNES, boasting detailed, charming sprite work and vibrant colors alike. This quickly becomes evident when booting up Spring Breeze, with players experiencing Kirby’s first adventure through new lenses. From the vast galaxy of Milky Way Wishes to the spelunking ambiance of Great Cave Offensive, the environments are incredibly lively. The Kirby series may not be the most graphically intensive under the Nintendo banner, but Super Star shows that the series in question knows its style, bringing it to life by making the most of the console hardware.

Kirby Super Star was composed by Jun Ishikawa, whose musical work spans the Kirby series at large. Ishikawa’s work seldom fails and Super Star is no exception, perfectly capturing the mood of each game. Whether it’s the various 16-bit remakes of Game Boy tunes for Spring Breeze, the frantic, motivating songs in Revenge of Meta Knight, or the sheer sense of adventure in Great Cave Offensive, there isn’t a dull or poorly made track to be heard. Many of these songs are timeless, too; the next time that you hear Meta Knight’s Revenge when playing Super Smash Bros. Ultimate, know that credit belongs to Super Star.

Given that Kirby Super Star was promoted to be, as mentioned earlier, a pseudo compilation, it isn’t a terribly long game. In fact, if one were to simply complete the main adventures, seeing each one to the end, they may not spend any longer than 4 hours playing. This shouldn’t come as too much of a surprise to Kirby enthusiasts, given the beginner-friendly nature of the franchise. However, there are secrets to be uncovered in the different games, such as additional levels in Dyna Blade and the more difficult-to-find treasures in Great Cave Offensive. If you consider yourself a completionist or are looking to get the most out of your investment, don’t be surprised if you spend over 8 hours combing through to find everything Super Star has to offer.

Kirby Super Star was one of the final SNES games to be released, as the Nintendo 64 would hit store shelves only a few months later. Despite this, Kirby’s latest adventure, at the time, was well-received. It sold over 1 million units on the 16-bit system, eventually finding its way on digital platforms such as the Virtual Console and, most recently, the Nintendo Switch Online service. In 2008 in Japan and North America and 2009 in Europe, a remake known as Kirby Super Star Ultra hit the Nintendo DS. This included features such as enhanced graphics and new gameplay modes. While it’s less common due to the more limited nature of DS games, Ultra is an objectively better experience.

At the time of this writing, Kirby and the Forgotten Land for Nintendo Switch is only a few short weeks away from release. In preparation, it’s been enjoyable to go back and revisit the pink puffball’s most esteemed entries. Kirby Super Star was far from a tried-and-true platformer, but this worked to its benefit, presenting itself as a compendium of sorts. It’s also available to Switch Online subscribers, meaning that it’s among the most accessible Kirby titles to boot. For those that haven’t touched it, Super Star remains a must-play.