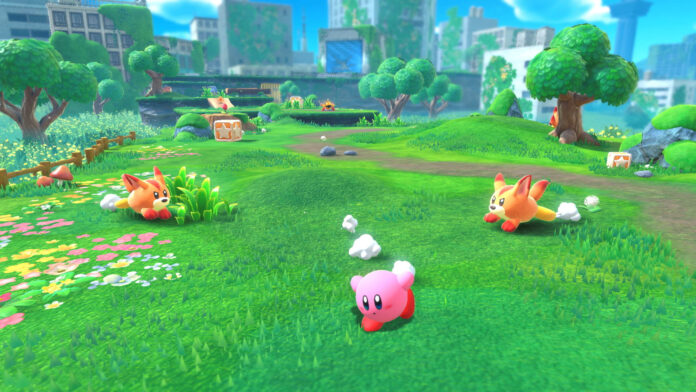 Developed by HAL Laboratory and published by Nintendo, Kirby and the Forgotten Land will release on Nintendo Switch on March 25, 2022. The game was unveiled during the September 23, 2021 Nintendo Direct, showcasing the pink, rotund mascot in a new 3D environment. The fact that this title was a 3D platformer illustrated a new direction for the series that started in 1992 on the original Game Boy. Recently, a demo of this upcoming Switch title hit the eShop. Take a deeper dive in our Kirby and the Forgotten Land demo review.

A free demo for #Kirby and the Forgotten Land is now available on the #NintendoSwitch #eShop! Download now to get a taste of Kirby’s copy abilities and the new Mouthful Mode before the game’s release on 3/25!https://t.co/SOB6WxqfuN pic.twitter.com/JAomk0wjCD

Kirby and the Forgotten Land Demo

More Than Meets the Eye

Available on the Switch eShop, the Kirby and the Forgotten Land demo is broken up into three parts: two standard levels and one boss fight. The first level serves as a warm-up, showing the player how to jump, hover, and inhale objects and enemies. It shouldn’t take seasoned gamers long to get used to the controls; Kirby has always been an approachable series and this is no different in The Forgotten Land. Keep in mind that each level can be played in two modes: Spring-Breeze and Wild Mode. While the former is a more relaxed experience, the latter ramps up the difficulty, so for those itching for more of a challenge, the option is available.

Certain levels contain optional missions that reward multiple replays. For example, in the level entitled Downtown Grassland, there is a mission that tasks the player with making 5 tulips throughout the level bloom. Another mission requires the player to save captured Waddle Dees. Throw in a litany of capsule toys that are just as hidden and it’s easy to see that Kirby and the Forgotten Land incentivizes exploration. This isn’t an open-world title – Super Mario and, to a larger extent, The Legend of Zelda have this market cornered from a first-party Nintendo standpoint- but there are still many secrets to uncover.

Hiccups Along the Way

The Kirby and the Forgotten Land demo was a fun experience, but it wasn’t without its shortcomings. One of the most notable, especially during Downtown Grassland, was the inconsistent frame rate. More often than not, the game runs at a smooth 30 frames per second. However, in the distance, enemies move at choppier frame rates. Only when the player approaches them will frame rates become smoother. While not a game-breaking performance feature, it’s jarring, if nothing else.

Another point to note is that, unlike other 3D platformers, this uses a fixed camera. The right analog stick affords the player a certain degree of movement, but it doesn’t offer the level of freedom that those who’ve clocked hours into Super Mario Odyssey would expect. This becomes especially problematic during co-op, as players may have trouble navigating the levels. Once again, this isn’t game-breaking, but it’s worth mentioning all the same.

Kirby and the Forgotten Land Demo – In Closing

Based on the demo, Kirby and the Forgotten Land is looking to be one of the more promising first-party titles on Nintendo Switch. Aforementioned hiccups and all, it valiantly translated the tried-and-true Kirby gameplay into 3D for this home console experience. Whether it remains one of the best entries in the series remains to be seen, especially with titles including Kirby’s Dream 2 for Game Boy, Kirby Super Star for Super Nintendo, and Kirby: Planet Robobot for 3DS regarded as fan favorites. Check out Kirby and the Forgotten Land when it drops on March 25.