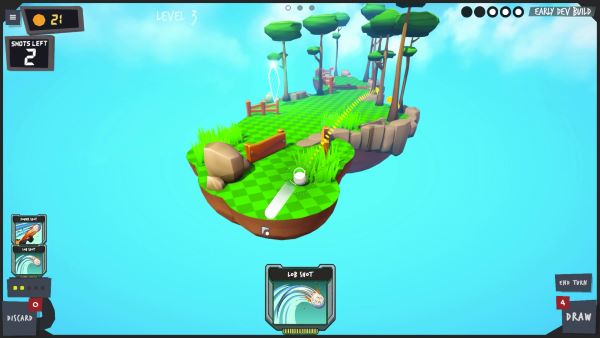 From the luminous-tinged bartending VR Startenders to the deeply dark philosophical narrative of Trolley Problem, Inc. and the mish-mash genre golf game that is Golfie, Yogscast Games’ lineup for the next three months promises compelling gameplay and quality experiences for all kinds of gamers.

Golfie
Golfie is a run-based roguelike mini-golf deck builder where players make their way through procedurally generated levels, building a deck of crazy abilities to try to beat 18 holes. From floating islands to dungeons, no two runs are the same. Play alone or with your friends in this innovative clash of golf genres.

Trolley Problem, Inc.
Trolley Problem, Inc. is thought-provoking new narrative adventure game from the executive producer of Gang Beasts based on the philosophical Trolley Problem, coming to PC in April 2022. Players will make tough choices and ponder life-and-death dilemmas across 55 ethical quandaries – and compare their decisions to the rest of the world.

Startenders
Startenders is a VR bartending experience heading to Meta Quest, Meta Quest 2 and PlayStation VR on March 17, 2022, with PS VR2 and PC VR versions planned for a later date. An immersive arcade-style game with narrative elements, Startenders puts players behind the bar to mix cocktails for a galaxy of patrons from across the universe.