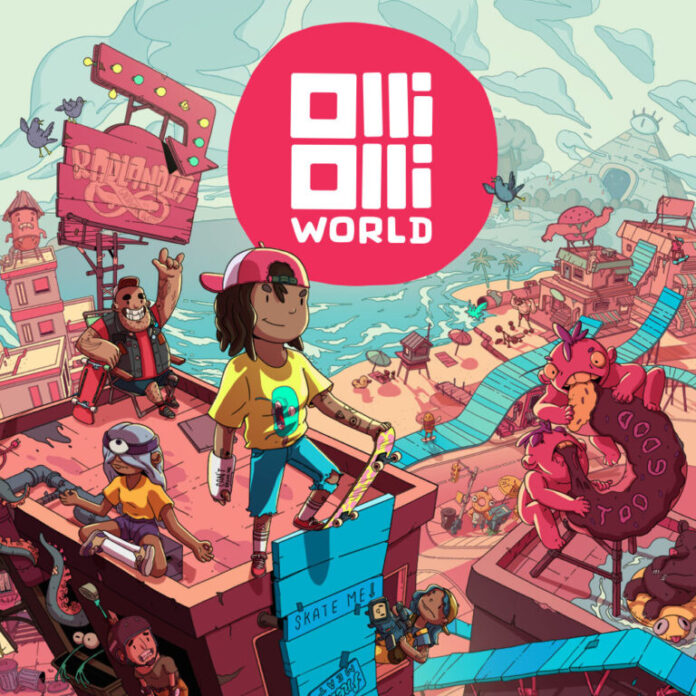 I loved the two original Olli Olli games from Roll 7 and Private Division and believed there was no way they could be improved upon such was the quality of both titles. How wrong could I be though as with a few changes and a new art style and 2.5D perspective, the impossible has happened and my Olli Olli World review reveals a superb mix of platforming and skateboarding that blew me away.

Both the original titles in this series didn’t really have a story to tell. It was all about getting on your skateboard and getting on with learning the art but here we have a new art style which is more cartoony, brighter and more sumptuous than before and along with it, comes a story of sorts.

As in tune with the skateboarding world as it could ever be, you are thrust into Radlandia, a world that came about thanks to five Gods who wanted to create a world that every boarder could only ever have dreamed of. The very top man is Chiffon and he has decided it is time to hang up his board and pass the mantle onto someone else and that someone else could be you! Any idea of just grabbing your board and filling his trainers needs to be removed from your head very quickly though because you need to work for your place among the elite and work hard.

Radlandia – Too Happy For Words

I doubt there is a happier place than Radlandia. Vibrant, colourful and inhabitants who are almost too jolly for their own good. The characters are there to add some padding to your journey and although they make the odd amusing quip, after a while I just wanted to speed past those parts and get back to the meat of the game. I can see why the story has been added in to aid accessibility and some will find it charming which is fine – it’s just not for this grumpy old gamer! (More old than grumpy I hope)

Whilst the original games were 2D, this time we are treated to a little more depth as the game has gone 2.5D and I flipping love it. Everything still feels familiar but fresh as a daisy and it really does stand out in a good way. The character animations hit the nail on the head and you can change your starting stances, end animations and even skill move animations. The attention to detail is mind blowing.

Being able to switch which tracks you are on is a welcome addition. I found that if I took the secondary route this tended to be more difficult with more obstacles and needed me to perform more advanced tricks as opposed to the more straightforward route. Trickier means more skill needed and more points on offer but what you have to remember is that if you crash you will be dumped back to the start of the course or to the last checkpoint.

The transition into the background and foreground is as smooth as you could wish for and the whole performance of the game is faultless in both docked and handheld modes. If you have splashed out on the Nintendo Switch OLED model then your eyes will be treated to brighter colours and the larger screen makes handheld play better than ever.

The gameplay doesn’t veer far from the tried and tested formula of the original games and with good reason. If it ain’t broke, don’t fix it, as the saying goes. Stairs, grind rails, half pipes are all here and a new favourite of mine, the wall grinds as you defy gravity and move along walls that at times are static and others are moving just to add to the dizzying speed of the game.

Whilst this is an easy game to learn, the challenge to master the game can be brutal but never quite feels unfair which is all credit to the developers. Putting in the effort to learn will result in rewards which to me os exactly how it should be.

Rocks and barriers crop up when least expected leaving you to rely on your reflexes but the feeling I got from avoiding them with a trick or two made it all feel worth the energy put into playing the game. If I failed at one hurdle there was never any way that I was going to give in. I went back and tried again until I nailed it.

At the heart of Olli Olli World are the leaderboards and if, like me, you want to see your name at the top of them (rarely happens but you got to keep trying haven’t you?) this will get your competitive edge flowing. Combo’s will ensure more points and points means cash you can spend. Whilst you don’t use points to enhance any super powers, your power is your board, you can get some cool outfit upgrades and I even got the chance to have a full of head hair for the first time in about 25 years! You can change your board colours, wheels and shorts as well as T-shirts and much more. Whilst not essential it’s a decent distraction whilst you get ready for your next run and it’s easy to use the shop so it never feels like it is in the way.

Whilst there is no co operative play as such, the leaderboards do generate enough competitiveness to make that oversight forgivable. Where the game excels even for there is with the Gnarvana league where you are placed into a group of ten others and each day you get the chance to get the high score for a randomly generated level. Even if you are not usually a competitive person, once you play this mode you will be as it hooks you in to a world where winning is everything.

Ending on a Fine Note

As if there wasn’t anything else that could go right with this game, there is the music and it is brilliant as well. Jazz, hip hop, lounge beats all take your along in the game and fit the style and genre like a glove. It’s probably fair to say that the tunes and effects are the icing on this rather delicious cake.

Roll 7 have done what I believed would be impossible and taken two of my favourite indie games of the last few years and made the experience even better. The new art style is just stunning, the game performs superbly well and even the back story adds a little humour to proceedings. A local Co-op mode would have been a nice addition but when a game is this good it is almost impossible to find any fault with it.

Do you agree with our Olli Olli World Review? What did you think of the game?