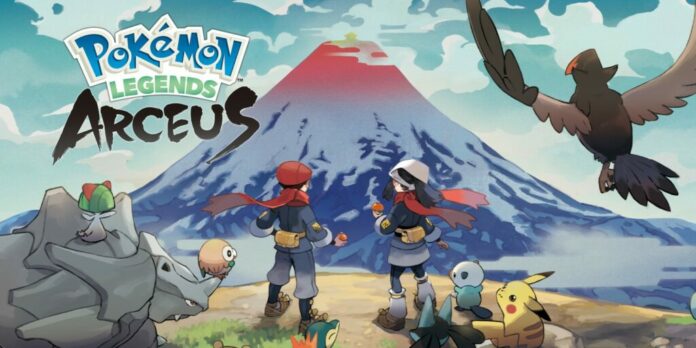 The official Pokemon YouTube channel has released a 13-minute video with oodles of gameplay and new features showcased for Pokemon Legends: Arceus. I have watched the Pokemon Legends Arceus trailer and decided to break down my thoughts on what the video presented.

Graphics are never going to be the be-all and end-all for a Pokemon game which is great in this case. The trailer for Arceus shows us some very mediocre-looking landscapes that are vast, but lacking in diversity when it comes to colors and features. Yes, each individual setting did look different but within them, there wasn’t much to write home about. With that said, the actual Pokemon do look nice and that’s really all I need.

The overwhelming sense I got from the Pokemon Legends Arceus trailer is that this game will be a truly immersive experience. I will be exploring amongst the Pokemon, sneaking around, getting into battles, collecting materials, and just generally exploring in a fun environment. The sense I got from the trailer is that the game takes some inspiration from the exploring and gathering side of Legend of Zelda: Breath of The Wild but manages to make it more accessible to a Pokemon audience.

As someone that’s played my fair hair of Pokemon games, the battle screen and battle system have grown stale. That’s why I’m happy to see a slight rethink of how that works in Arceus. Not only is there a different presentation of the battles but adding in the strategic elements of agile attacks or strong attacks presents opportunities to actually formulate different plans for success instead of grinding and taking advantage of type mismatches.  The presentation of the battle screen is such a minor tweak but one that freshens things up a lot and an added element of strategy is something that Pokemon fans will no doubt welcome with open arms

Between observing Pokemon, fulfilling requests, catching Pokemon, dealing with Alpha Pokemon, and fending off noble Pokemon, Arceus is a game with so much going on. The basic premise of Pokemon is one that over the years has received very minor changes, based on the Pokemon Legends Arceus trailer this game has completely changed the way a Pokemon game plays. Whether it all works or not remains to be seen but the trailer showcased that there’s an actual depth to this game beyond just catching Pokemon and battling.

I was going to give this game a miss.  I figured with Brilliant Diamond and Shining Pearl raking in the money that Legends: Arceus would be an overlooked and undercooked attempt at something interesting. Instead this game looks like it could revolutionize the Pokemon series once and for all and provide with a much-needed spark that recent releases have been lacking. As someone that couldn’t even finish Pokemon Sword/Shield, I am so happy to see the Pokemon series embrace a new idea and really run with it. Whether Arceus can live up to the hype or not it will be fondly remembered by me for daring to rethink how a Pokemon game can play.