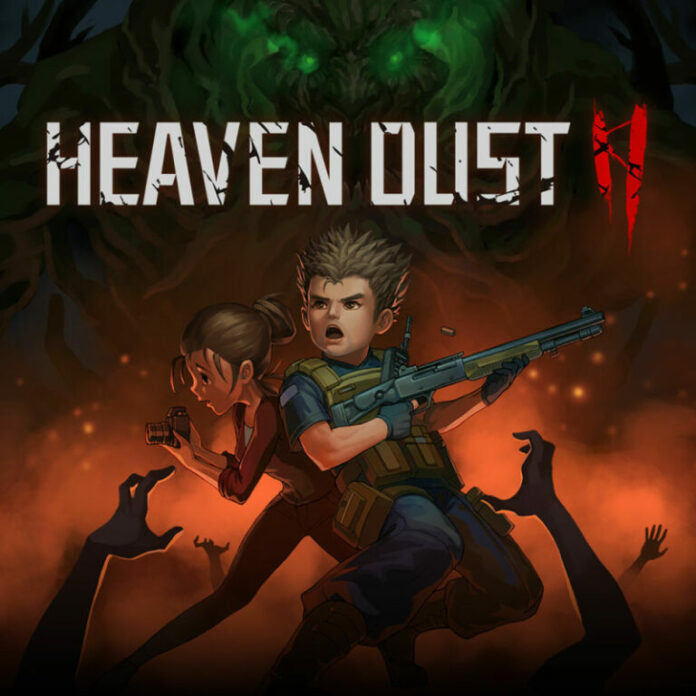 Heaven Dust 2 – developed by One Gruel Studio and published by Indienova – has arrived for the Switch and PC. But is this cute, nostalgic horror game fun to play?

Heaven Dust 2 Review: A Fun Game With a Few Flaws

Fans of Resident Evil will be happy to delve into Heaven Dust 2. Waking up in a cryogenic pod, you arrive in the middle of the action with no weapons, no resources, and no obvious way out. You’ll have to fight your way through hoards of zombies, find and upgrade your weapons, and solve a series of puzzles in order to escape.

We’ll start with the gameplay because that’s the main draw here: it’s a total throwback to Resi. Everything from juggling resources in your inventory to finding save rooms to the style of the puzzles feels extremely familiar. You’ll even find, and be able to mix, red and green herbs. If you’re a fan of the first few Resi games, this will feel rather comforting, and you’ll be able to dive into it straight away.

You’ll slowly unlock the facility, and become intimately acquainted with it, as it involves a lot of going back-and-forth. You’ll find a key that fits several locks, for example or a metal plate that you need for a room on another floor. It feels satisfying to slowly unlock each area, popping the heads off a few zombies along the way.

The combat is pretty straightforward. Aim for the head, and you’ll be okay. Some zombies are trickier than others, with extra layers of flesh and bone to shoot through, and some of them inconveniently explode, which is something to look out for.

As with the original Resident Evil games, bullets are not an infinite resource, so you’ll have to be strategic. All the usual tactics – drawing them out one-by-one or finding a red barrel to explode – work well here, although there were a few moments when I became completely overwhelmed. It has a good difficulty curve, and the action definitely ramps up towards the end. Make sure you make the most of those safe rooms though.

Heaven Dust 2 gets bonus points for having a Casual setting. This is perfect for people who want to delve into the story or puzzle elements of the game without worrying about getting stuck. If you complete the game on the Normal setting, you will unlock the Expert difficulty if you fancy giving that a try.

The puzzles weren’t too tricky to solve, but what hindered me more than anything was how dark this game is. I mean literally, not thematically. At least three times I found myself frustratedly wandering around, only to accidentally stumble upon a new area that I could have gone into half an hour earlier had the game been a tiny bit brighter. This is definitely an issue when playing it handheld on the Switch, as you’re already impeded by the size of the screen.

I found myself relying on the map a lot, which is fine (if slightly annoying having to constantly flick back and forth between the map and the game) but you’ll have to find the map for each area first. Usually, this is located quite near the entrance of a new area, but it’s still frustrating when you don’t have it yet.

Heaven Dust 2 is an unexpectedly cute game. The graphics are fun, and while this does remove some of the tension (the zombies aren’t particularly scary to look at), However, you can tell a lot of care and thought has gone into the little details.

There are different types of zombies, each with their own strengths and weaknesses, and they’re quite fun to look at, although it did become a bit repetitive having to shoot the same few zombies in the face time and time again. The bosses help to break things up a bit, and I found those moments elevated my excitement when the game started to feel a bit samey.

The story is pretty average. You don’t have to play the first game to get what’s going on here. It’s zombies, after all – what more can be done with zombies at this point? The translation wasn’t 100% perfect, either and I noticed a few grammatical errors that broke the illusion a little bit. Also, for some reason, the text doesn’t scroll down on some of the longer diary entries as well. I don’t think most people will play this type of game for the storytelling though, and it does have different endings, which is a nice touch.

Overall Rating: 7 Out of 10. I really enjoyed Heaven Dust 2. It’s a cute little indie game, and it will give you a nice nostalgia hit. The puzzles and bosses help to break up the otherwise repetitive exploration of the facility, and it looks nice too.

The biggest issue I had with this game is the navigation. Had some areas been more clearly signposted, it would have saved me a lot of frustration while wandering around. The translation could do with some work too. Otherwise, it’s a solid game that will give you a good 8-10 hours of entertainment.

this game was reviewed using a digital code provided by the publisher.