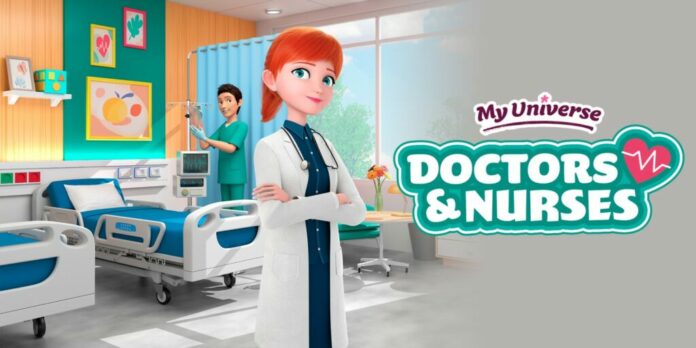 LOn December 2 the My Universe series gained a new addition in the form of a Hospital simulation game My Universe: Doctors & Nurses. While the premise of this game offered the opportunity for lots of fun but the final product is one of the most wooden and bland games I’ve played in a long time.

The main issue I had throughout the game is how wooden and slow the controls are. Getting that sort of thing right is essential to a game that has me walking around a map and playing repetitive mini-games, and this game failed in that regard.  I don’t think I’ve had to deal with controls this poor since I was a regular Playstation 2 player. I really can’t overstate how slowly the characters move it removes any element of urgency that the game tries to create.  As anyone who has read some of my other reviews knows, proper controls are something I really desire in gaming.

All of this comes while the camera is so zoomed in that my depth of vision is worse than some fish at the deep depths of the ocean.

There’s only a handful of different tasks that I actually did throughout the game. That would be ok if they were fun or challenging, but they’re absurdly easy, so much so that I barely felt the need to try by the end of the game because I knew I’d succeed.

The game could definitely have done some good stuff with the mini-games by spicing them up or just changing them in some way but they’re basically just a repeat of what came before.  Although the mini-games were admittedly better than the period where the Nurse character is doing the most menial fetch tasks possible.

Almost every single character in this game is unbearably annoying. So much so that my desire to help them or co-operate with them at all wore down over time. I didn’t care for the tacked-on relationship drama, I didn’t care about the silly rivalry, I didn’t care about the handful of know-it-alls, and I despised the psychopathic janitor who believed in ghosts and mummies and would get irrationally angry over soda.

Even the two main characters can’t save the day. Dr. Davis panics over everything and gets down on himself over nothing, they explain this away with a throwaway line about his parents having high hopes for him, and he shows no growth over the course of the game. The other character Alex is at least down to earth and more likable but her dance is terrible despite that being her defining trait. Amazingly, they kind of hinted at a romance between the two main characters but never fully commit to it so there’s just a painfully awkward dinner invite and nothing more to follow up.

I’m not sure if this is a game specifically meant to be geared towards children but even if it is I can’t see any children enjoying this game.  Every core mechanic is done badly and if it weren’t for the fact I had to review the game I would have quit long ago.  The music was nice I guess, big The Sims vibes, so big ups to whoever made the games’ tunes.