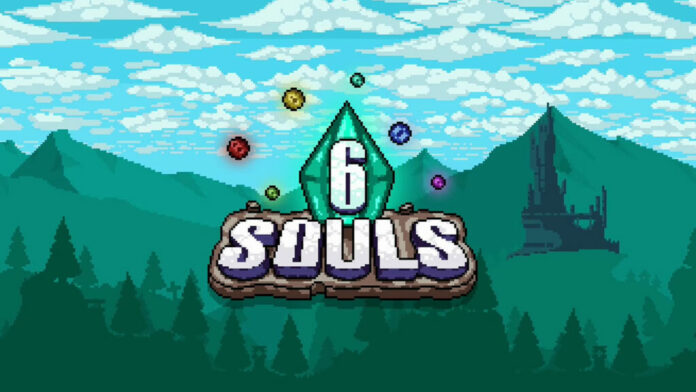 6Souls is an adventure platforming game that released on December 3 across multiple platforms. I had the pleasure of playing 6Souls before its release and I can say without any doubt that it is one of the better indie games that I have played in some time. There are few games that do just about everything as well as 6Souls did.

The main thing that I absolutely adored was how seamlessly this game built on the very simple idea of making it through each level by platforming and fending off enemies. As the levels progressed they added in the souls ability to extend jumps, different weapons, and more challenging environments without ever overloading me as the player. The biggest reason for this is that they added things gradually meaning that beating a level was the key to opening up a whole new world of possibilities that were explored and built upon throughout the game.

Even when they took things in a completely different direction for the stealth level it felt natural and because of previous sections in older levels controlling the dog Butch for the entirety of a chapter wasn’t a massive seismic shift. These well done and seamless mechanics would be nothing without..

First things first, 6Souls isn’t an easy game it is challenging, but in the best way possible. This isn’t a game designed to kill me thousands of times until I pull off precise movements. It is instead a game with room for error but one that punished me if I didn’t take things seriously and try my best. The added dangers that present themselves as the main character Jack becomes more powerful felt very natural and kept me on my toes until the very end of the game.

Another great thing about the levels is that they’re short and compact. I wasn’t tasked with facing 5 difficult obstacles in a row with the threat of repeating all of them if I failed in the back of my mind, generally there’d be one or two tough sections with tame platforming before and after. This makes the game very addicting as dying to a difficult section of a level doesn’t require 3 minutes of work only to die again, instead, I was compelled to take on the task again and again knowing that I could retry easily enough once I respawned.

I did occasionally have some issues with level layouts as sometimes you can’t see platforms on-screen and are just making leaps of faith, this doesn’t come up too often since Jack has binoculars that can help me plot a course through a level but sometimes if I was on a disappearing floor or in the windy levels the binoculars weren’t exactly a useful option. That said, this was a rare issue and not one that ruined my enjoyment of the game because the levels were short enough that I knew I’d get a second chance soon enough. One minor critique I do have is that the bonus collectibles of a coin and bacon were just kind of there and there was no incentive to choose a harder path to get them but this isn’t anything major.

Each chapter is rounded out by a boss fight and this is where 6Souls really shines. The bosses are ultimately easy yet I needed to be at my absolute best to defeat them if that makes sense? It was the ultimate dangled carrot of knowing I can defeat them but I just had to be sharper and better prepared the next time. They truly felt to me like the epic battles against a tough foe that they’re meant to be and that was delightful. It’s tough to achieve perfection with bosses, either they’re a big softie or they make you want to tear out your hair with difficulty, but 6Souls managed to toe that line with flawless execution.

What I liked about the storytelling, graphics, and even the music of the game is that they were kept simple. There’s no need to overdo it in a game like this and 6Souls didn’t. Bit by bit it unfolds the storyline of the soul amulet and the evil villain who lured Jack to the castle to achieve immortality by collecting the 6th soul, through flashbacks you see this villain powerfully tear through the castle and take an entire family’s soul. It’s a very simple tale of powerful evil vs valiant good that is just enough to give the game meaning without ever breaking the flow of the gameplay.

Graphically there’s nothing awe-inspiring about 6Souls but it does a good job of making ever level look different through different backgrounds, different enemies, and different color schemes.

Special mention goes to Stanislav Bulaev who did the Music and SFX for 6Souls. It’s hard to describe just how good the music and sounds of the game are but they manage to both blend into the game and stand out at the same time. The songs especially are great at conveying the different tones of each chapter even if they’re ultimately not memorable. I also would like to thank whoever made the decision to add in the very satisfying sound made when Jack is restocking arrows.

It’s rare that I don’t have a bad word to say about a game but 6Souls is an example of a video game done right. It didn’t overreach and promise the world, it focused on delivering what it could and making the most out of the game’s core concept. While it isn’t a game of the year contender or even a game that MUST be played this would make for an excellent addition to anyone’s gaming library. Between this game and The Lightbringer platforming fans are having a lot of joy lately.