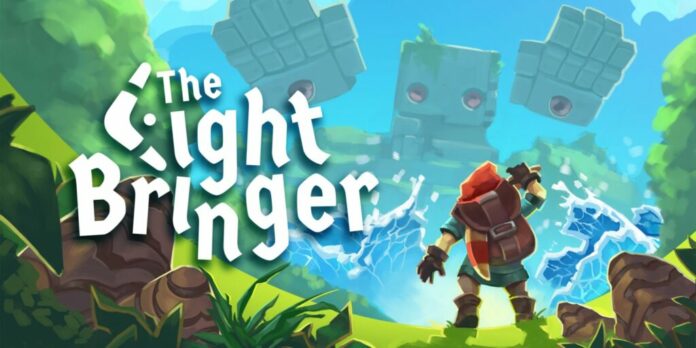 The Lightbringer was released on the Nintendo Switch on October 7, 2021. The indie game, developed by Rock Square Thunder had a demo available to play before its release, that I reviewed recently. I can safely say that the demo doesn’t even come close to showcasing how good this game actually is and it’s a must-get for any fans of platforming games.

The Lightbringer Review: Bringing Light To The Platforming Genre

I can’t express enough how much I enjoyed the platforming in this game. As someone who grew up on 3D platformers, it was a joy to play a game as well-executed as this. The level design, additional mechanics, and steady growth in difficulty made this a challenging, but enjoyable experience. The level design is where the platforming really excels, there’s always something new to explore and interesting ways of getting around the level. Each chapter having a different setting helps with this as the desert levels have different challenges to the ice levels which are different from the basic opening chapter.

The controls are make or break for platforming and The Lightbringer manages to keep things tight without feeling too restrictive. It’s a delicate balance to find and this game hit the equilibrium to make sure I felt in control and like I could take on anything at the same time.

Exploring the levels is so much fun and if the game was all about this kind of gameplay it would no doubt have gotten a very high score from me. Unfortunately, I feel like the game was dragged down by one of its other core mechanics.

To defeat the slime you have a boomerang, just a boomerang. This isn’t too bad early in the game when all of the enemies are basic but as the game progresses and the enemies get tougher the combat becomes more annoying than boring. Aerial enemies are oftentimes impossible to hit because the boomerang can’t be thrown at an angle, which leads to points where I’m just dodging an enemy that I can’t kill in the hopes that they don’t disrupt anything.

Even when the game doesn’t present me with unkillable enemies the combat sections are just not all that interesting and feel like unnecessary padding. This isn’t a massive issue but it definitely stops the game from hitting the heights that were achievable had it gone all-in on the exploration and adventurous side of the game.

In my demo review, I lamented the game’s storytelling and how the Sister narrating my activities was kind of annoying. In the full game, this issue is rectified. The game’s lore is told through finding and hitting bells located throughout each level, these bells slowly but surely explain to the player what happened to the world and why this new Lightbringer is so special. It’s a simple tale of darkness taking over the world and a chosen hero being needed to save the world, it doesn’t rewrite the playbook but it gives my actions meaning. Reading people’s happiness over my attempts to bring light to the world was a good motivator to keep me playing.

The sister’s narration eventually becomes somewhat amusing as every time she pops up I began to wonder what new way she’d force a rhyme into her sentence. I’m not sure if that was the intended strategy of the developers but it was something that I eventually grew to find funny.

The Lightbringer isn’t a perfect game but for all of its faults, it is a game that plucked at my nostalgia with its platforming capabilities. Exploring each level is a challenging and fun experience that kept me engaged from start to finish. The increase in difficulty as the levels wore on kept me on my toes too and made sure that the gameplay never lapsed or become uninteresting. For any fan of the platforming genre this is a game I can highly recommend picking up even if the combat is limited at times.