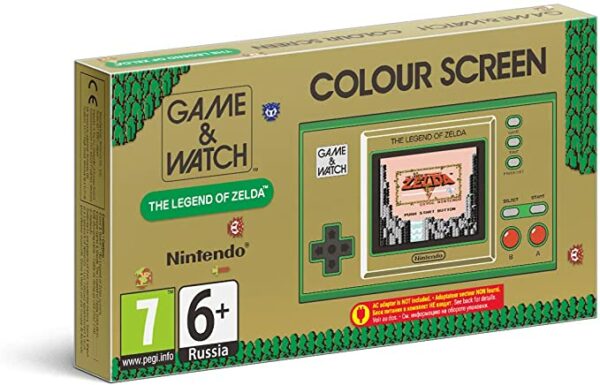 Around this time last year, Nintendo released Game & Watch: Super Mario Bros., featuring three games revolving around the Super Mario franchise. This became a highly-regard item, not so much for the games but the device itself. It breathed new life into Nintendo’s series of handheld electronic games for the first time since 1991. Only a few days ago, Nintendo followed up with a sequel device focused on yet another beloved franchise. Enter Game & Watch: The Legend of Zelda, commemorating the 35th anniversary of the franchise in question. While it may not set the world on fire, Game & Watch: Zelda remains a worthy collector’s item for fans of The Legend of Zelda, Nintendo memorabilia, and video games at large. Let’s take a deeper dive.

Upon opening the box for Game & Watch: The Legend of Zelda, one will be greeted by a number of items. These include a redeemable My Nintendo points slip, a user guide for Game & Watch: Zelda, a USB charging cable, and of course, the device itself. There is also a collapsible stand used to prop up the device. Your mileage for this accessory may vary, depending on whether you intend on displaying the system out of its box, but it makes for a welcome bonus that Game & Watch: Super Mario Bros. lacked.

As far as the device itself is concerned, it’s a definite treat for the eyes. Anyone that’s even remotely nostalgic for the original Game & Watch series will find it hard not to smile as they inspect every corner of the system. In fact, it looks less like a portable game system and more akin to an elegant piece of jewellery , keeping frills to a minimum. This isn’t to say that there aren’t little secrets peppered throughout. For instance, the back of the Game & Watch: Zelda system features a Triforce design that lights up when the device is powered on. Turn down the lights in your room to maximize the effect.

Without question, Game & Watch: Zelda impresses from a hardware standpoint. It falls in line with the Game & Watch series at large, providing handheld gaming in a charming form factor. If you were to do nothing with this system other than display or keep it for collector’s purposes, it’s an easy investment. With that said, this is just one component of the larger value proposition

From a Functionality Standpoint

Game & Watch: The Legend of Zelda comes with 4 traditional games. They are the original Legend of Zelda and Zelda II: The Adventure of Link, originally released for the Nintendo Entertainment System, Game Boy classic The Legend of Zelda: Link’s Awakening, and a custom version of the classic Game & Watch title, Vermin. Also included is Timer, a playable timer based on Zelda II where the player can fight enemies as the clock ticks down. Simply put, there is plenty of value to be seen.

The 3 old-school Zelda games perform well on this Game & Watch device, which is to be expected. Keep in mind that these games date back to the mid-to-late 1980s; on paper, performance shouldn’t have been a concern. The games are presented well on the system’s small screen, boasting bright colors and sharp graphics. Admittedly, Game & Watch: Zelda isn’t the most optimal way to revisit these games, largely due to the device’s roughly 35-millimeter screen. However, if you fancy yourself a completionist, rest assured that each game can be played from beginning to end.

If you’re a fan of Easter Eggs, Game & Watch: Zelda houses several secrets from a functionality perspective. Case and point, the Time mode of the device runs in silence, save for sound effects. However, by holding A for 5 seconds, music will play in accordance to the location Link is traversing; performing the same action will turn the music off. This action yields different results for other games, such as providing maximum hearts in the original Legend of Zelda and full stats in Zelda II. These are just a few secrets this seemingly modest device houses, so see how many secrets you can find.

As mentioned earlier, this is the perfect collector’s item for fans of the series, Nintendo memorabilia, and gaming at large. There is so much to enjoy about the device, even without ever taking it out of the box. The fact that Nintendo rejuvenated the Game & Watch series last year took many people by surprise, but what has been even more shocking is the continued support of these legacy systems. One must wonder what series will get the Game & Watch treatment next. Could we potentially see Metroid, Kirby, or even Pokemon added to this line of systems? Only time will tell, but in closing, Game & Watch: Zelda doesn’t disappoint.