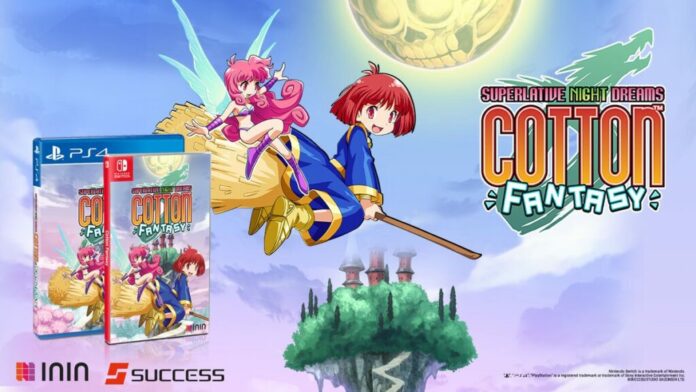 ININ Games has announced, in partnership with SUCCESS, that Cotton Fantasy Pre-Orders will begin November 13th for both the PS4 and Nintendo Switch, and will include both a Limited and Collector’s Edition. The new title, which is for the West, will be released as Cotton: Rock ‘n’ Roll in Japan. Shipping of gaming orders is expected to begin around March 2022.

Cotton Fantasy continues the series with new graphics and game mechanics, but with six lovable characters that gamers remember from the previous titles. 16 scrolling stages are available to play through with remastered music that will keep players jamming while trying to get that elusive high score. The game is fully voiced in Japanese with animated cutscenes.

The Cotton series of games presents itself as a fun and light-hearted experience, with the newest release being no different. The style and design lends itself especially to anime fans who enjoy a break from the more serious lines of games out there. The Limited Edition is a good introduction for new fans to the series, while the Collector’s Edition not only is perfect for the hardcore but also gives you a lot of bang for your buck. The new game plus the Collector’s Edition are perfect ways to celebrate Cotton’s 30th Anniversary.

The trailer for the Limited and Collector’s Editions can be found here.