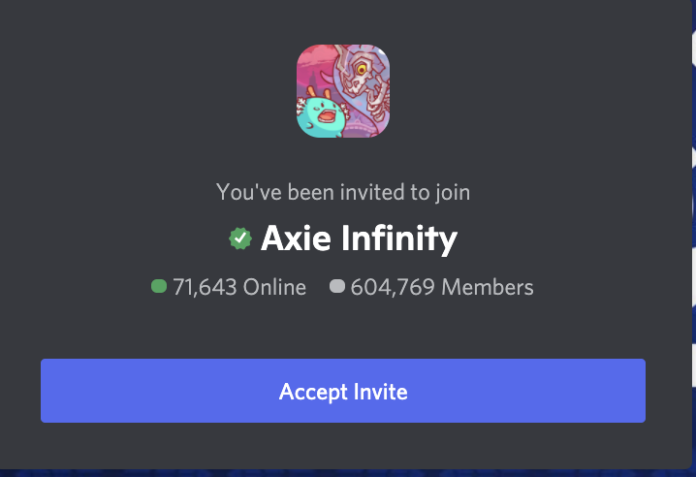 TUESDAY, NOVEMBER 2— Members of the Axie Infinity official Discord server collectively lost over $100k Ethereum to an elaborate phishing scam. The anonymous hacker used the server’s bot to post several announcements stating that they were releasing over 1,000 new Axie NFTs. Members were given a chance to mint these before they were posted into the public marketplace.

A Heist in 10 Minutes

The announcement also included links to an external website. Once there, visitors were urged to connect their Metamask wallets to be able to send the required payment of 0.1 ETH ($435 at the time of writing) plus gas fees, and receive the Axie once released. However, this was only a fake phishing site as the hacker programmed the website to send the coins towards their personal cryptocurrency wallet. The announcement was also posted in several languages to attract international members to invest.

Moderators quickly came in to shut down the bot and warn people to not click the link. The more experienced cryptocurrency traders were also deterring members to not link their assets to an obvious scam. The whole affair was controlled in less than 10 minutes. Even so, the hacker tweeted that they were able to scalp $103,032.70 within that timeframe. Visiting the website also leads to a message mocking their security. The explanation for how their security was breached can be found on their official server. They are now hard at work to reimburse their player’s lost assets as well as improve their security.

The reason why the scam succeeded was because of the sense of urgency it instilled. The announcement boldly declared that the NFTs will be sold out very soon because slots were filling up immediately. NFTs exploded into mainstream popularity recently, and investors are always looking for the next big project to buy in early while the prices are still low. Fear of missing out and regret are powerful emotions, it severely clouded their judgment leading them to buy without verifying the information. Although the malicious event falls on the Axie Infinity Discord server as well as Discord’s security itself, cryptocurrency owners should also be wary about where they connect and link their online wallets.

Marvel’s Iron Man VR Cannot Shift Last of Us 2 Atop...