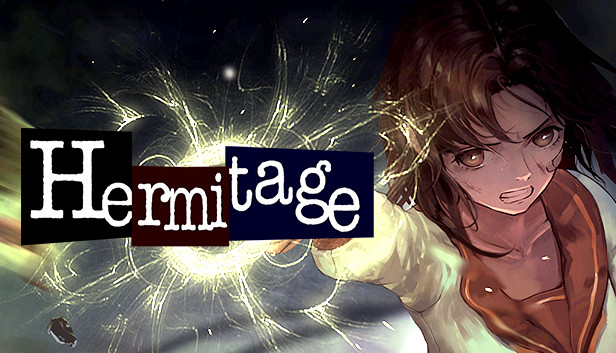 I’ll admit I’m a sucker for a visual novel like Hermitage: Strange Case Files. It’s a story, but it’s also a game! What could go wrong? But having played quite a few of them over the years, there are actually a few things that can go wrong. Hitting the sweet spot between engaging story and entertaining gameplay can be tricky.

I’ve got mixed feelings about Hermitage: Strange Case Files. I’ll tell you why (whilst trying to avoid spoilers as much as possible):

Hey, Why Doesn’t the Main Character Ever Leave the Bookshop?

Let’s start with the story because let’s face it, that’s the most important thing here. Hermitage: Strange Case Files is mostly set in Hermitage, a strange bookshop run by a former anthropology professor/amateur paranormal detective.

I’ll say first that the story started off really promising. A teenage girl having strange visions comes to Hermitage bookstore seeking answers, and the Store Manager gets swept along for the ride. Each case has a different underlying story, a format I am very comfortable with as a former Cthulhu roleplayer.

This, however, was part of the problem for me. Being super familiar with Lovecraftian mysteries meant that I didn’t find it as compelling as I may have done otherwise. The problem is once you’ve read, played, or experienced Lovecraft many times over the years, you’ll always know what the solution to the case is going to be. There are going to be cults involved somehow. If you can destroy that symbol/do that ritual/avoid all those tentacles then you’ll probably be fine.

What saves it from being too familiar is the underlying story involving the mysterious Store Manager and his friends. You’ve got a kid hacker on the run, a legal consultant, and a freelance detective helping out. I felt like I’d been plonked right into the middle of their lives, as though they were going about their business before I arrived. Finding out about the Store Manager and his own storyline kept me from getting bored by the actual cases.

(Although I do wonder why nobody thought ‘huh, that’s weird’ when he happily allowed two teenage girls to stay with him. Also, I wondered what exactly he was up to when said teenage girls faced an unspeakable horror at the end of Case One. Presumably he was off chain-smoking somewhere.)

It’s probably worth mentioning that the dialogue does go on a little bit too long for my liking. The Store Manager is clever-bordering-on-pretentious, and I think each case could have probably been shorter to keep the momentum going.

Not Actually That Scary

Playing this game brought back happy memories of Another Code: Two Memories and Hotel Dusk on the DS (and other visual novels of the era, like Nine Hours, Nine Persons, Nine Doors). What I loved about those games was the power they had to actually creep me out. Using story twists and good sound design to ramp up the tension, I got lost in them, and the opening of Hermitage felt similarly promising.

While the sound design is good and there are some twists and turns, this doesn’t make it creepy enough to make it work as a horror game for me overall. Again, maybe this is because I’m so used to fighting Cthulhu-esque monsters in my mind (as in during roleplaying, not just randomly in my spare time) that the actual horror of it is lost on me.

Interesting Gameplay Breaks Up the Story

The gameplay adds a bit of interest, breaking up some of the longer dialogue sections. You’ll collect clues from different places – conversations with other characters, Hermitage’s strange book collection, and forum posts – and use them to build your cases. Occasionally you’ll be given a kind of pop quiz. Have you figured out how each piece fits together? If you get it wrong 3 times in a row, the game will move on, but there will be a consequence later down the line.

I’ve seen this game described as a ‘point and click’ which seems odd to me as there is not a huge amount of pointing and clicking. I would have liked more time to explore the settings, hunting for clues myself rather than the clues being found for me by the characters.

Being able to switch between conversations, looking at books, browsing the web forum (which is just full enough of random posts to feel authentic, and is also stuffed with little Lovecraft easter eggs), and sending messages on your phone breaks things up a bit, making it feel more like a game and less like you’re reading a script.

They introduce an interesting game mechanic early in the game. During a conversation, you can press a symbol and choose something to observe about that person – their hands, their facial expressions, and so on. You only get to choose once, so you’ll have to pick wisely or you might miss something. I like this concept, but in practice, there was a huge gap between the first time this happens and the second time, to the point where I thought they’d just given up on it. Still, I like that you don’t get another chance to choose the right one.

Hermitage: Strange Case Files looks great. Each setting is nice to look at, the characters are well-designed (although having the private detective dress almost exactly like Sherlock during investigations is surely an act of self-sabotage), and the interface itself looks great. The striking style (particularly the fonts and colours) reminded me a bit of Danganronpa, only a bit less bonkers (and with no bears).

You can tell a lot of love and attention went into the art, which I really appreciated.

So, would I recommend it? I think you have to be a real fan of the genre to want to stick with it all the way through (or really obsessed with Lovecraft). While the characters and setting are interesting, the middle sections of each case drag on a bit too long. And I would have liked it to be creepier for a horror game. Check it out if you’re a fan of visual novels and you want a new one to try out.