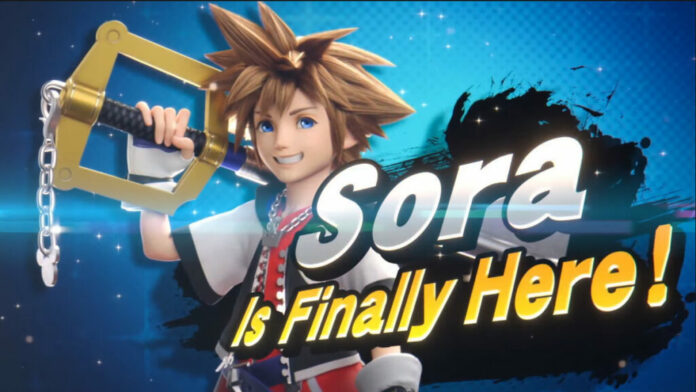 On Tuesday 5th October via YouTube, Nintendo unveiled the final DLC character for Super Smash Bros. Ultimate. Released in 2018, the game amassed an incredible roster, featuring both Nintendo staples and personalities from third-party properties. The latter include, but aren’t limited to, Sonic the Hedgehog, Pac-Man, Banjo & Kazooie, and Minecraft‘s Steve. The final fighter has been unveiled: the most popularly requested character since the game’s inception, Sora of Kingdom Hearts.

The reveal for Sora in Super Smash Bros. Ultimate begins with the game’s entire roster in their trophy forms. A lone flame drops from the iconic Super Smash Bros. logo above. From there, Mario becomes animated again as he slowly approaches the flame. Mario reaches out for the flame before launching a projectile from it. The projectile in question soon materializes into the iconic Keyblade, which unlocks a portal in the air. Emerging from said portal is Sora himself, who floats through the air as the other Smash Bros. characters watch from below. The reveal ends with the quote, “Sora is Finally Here!”

As one of many “swordfighters” in Super Smash Bros. Ultimate, Sora is a lightweight character that boasts impressive jumping ability. His costumes are based on his appearances in different games, including the original Kingdom Hearts and Kingdom Hearts II, in addition to alternative outfits such as his black-and-white Timeless River design. Sora also comes with his own spirits, in addition to a new stage, Hollow Bastion.

In addition to Sora from Kingdom Hearts becoming the final fighter, the final round of Mii Fighter Costumes was unveiled. Two of the costumes in question are wigs, one based on the Octoling and the other on Judd from the Splatoon series.  The final costume, which is a more full-fledged attire, is that of Doom Slayer, modeled after his most recent appearance in last year’s Doom Eternal.

With this reveal being for the final fighter in Super Smash Bros. Ultimate, it was all but imperative that the development team went out with a bang. Sora from Kingdom Hearts is undoubtedly that, especially given how popular of a request he was. According to director Masahiro Sakurai, 6 years ago, a Smash Bros. Fighter Ballot was held in conjunction with Super Smash Bros. for Nintendo 3DS and Wii U. The most voted choice was Sora. From there, discussion with Satoru Iwata took place and it was decided that the results of the poll wouldn’t be released.

It will be interesting to see how Sora plays once Challenger Pack #11 is released on October 18. This pack is also part of the game’s second Fighters Pass, which includes Pyra and Mythra from Xenoblade Chronicles, Sephiroth from the Final Fantasy series, and others. While Sora concludes the roster of Super Smash Bros. Ultimate, he makes for perhaps the most surprising addition all the same.

All The PlayStation Plus Launch Games in 2022