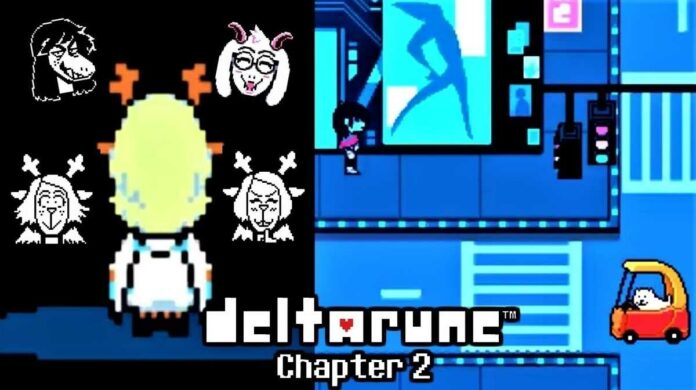 On September 15, 2015, a humble yet ambitious game hit the scene. Undertale, developed and published by Toby Fox, quickly became one of the most talked-about independent titles, blending RPG elements and “bullet hell” gameplay into a unique experience. It has since developed a dedicated, vocal fan base, with many gamers often drawing comparisons to Nintendo’s Earthbound series. Make no mistake, though; Undertale was, and is, its own creation. In 2018, Fox followed up with an equally ambitious project. This leads us to our Deltarune Chapter 2 review which was released earlier on 24th September 2021.

A Story From Castle Town to Home

It’s difficult to discuss Deltarune Chapter 2, at length, without diving into the aforementioned spoilers. In summary, however, this part of the game takes place after the events of Chapter 1. Kris and Susie return to the Dark World, where they meet up with their old Dark World allies, Ralsei and Lancer. Chapter 2 focuses on a new antagonist: the robot Queen of a Dark World overrun by technology. The trio, Kris, Susie, and Ralsei, must stop the Queen, all the while protect Kris and Susie’s classmates that have found themselves trapped in the Dark World.

One of the ways that Chapter 2 builds upon Chapter 1 is its characters. Ralsei, for example, is given more time to shine than he did in the first chapter. Players see him not only showcase his skills, specifically concerning healing, but develop a budding relationship with Kris. Susie is expanded upon as well, the player learning that her tough exterior serves as a mask for a more compassionate, even heroic at times, demeanor. Deltarune Chapter 2 has story and narrative development that words alone can’t do justice.

Gameplay That Makes You Feel Like a [[BIG SHOT]]!!

Deltarune Chapter 2 features gameplay that, as one may expect, is in line with Chapter 1. In fact, Deltarune itself is very much an extension of Undertale from a minute-to-minute gameplay perspective, presenting itself as a different kind of RPG. Over the course of 3 to 5 hours – a little more than 4, in my experience – the player will explore Kris’s real-life world and the Dark World. It’s the latter where the core gameplay takes place, as Kris and their allies meet new characters and encounter various threats.

When said threats are met, fights begin. Not unlike Undertale, Deltarune features two primary approaches: Fight and Act. Fight, as the name suggests, involves combat where players whittle down the HP of enemies until they’re defeated. Act, however, is a more pacifistic approach. By using this, players can calm enemies, sparing them before they join civilization as do-gooders. Though Act is the recommended way to play Deltarune, the inability to gain EXP makes this route an extra challenge. Anyone that’s competed the “Pacifist Route” in Undertale will feel at home here.

This isn’t to say that players are entirely defenseless. When enemies attack, players enter “bullet hell” segments, where they must avoid attacks within specific parameters. By brushing past attacks, the player gains tension points, or TP, which allows the use of spells; think of TP as MP in a more traditional RPG. These “bullet hell” segments were among the various bright spots in Undertale and they work just as well, if not better, in Deltarune, making battles feel more like dynamic puzzle games.

In addition to being an ambitious video game developer, Toby Fox has also proven himself as a solid composer. Case and point, he composed the entirety of Deltarune Chapter 1 and Undertale. Deltarune Chapter 2‘s soundtrack has also been put together by Fox, though he wasn’t alone this time around. Other names credited are Lena Raine and Marcy Nabors. While Raine worked on music for games such as Celeste and Minecraft, Nabors is best known for her audio work on the Homestuck series.

As far as the Deltarune Chapter 2 soundtrack is concerned, various moods and tones are covered. “Queen,” which is the main theme of this chapter’s antagonist, is equal parts comedic and looming. “A CYBER’S WORLD?” is perhaps the strongest track of all, starting quiet and modest before steadily ramping up the intensity. “You Can Always Come Home” makes its return in Deltarune Chapter 2, having been used in previous Fox-developed games, and it’s just as easygoing here as it was in the past. That is, until a certain point in the game’s story; once again, we at Last Word on Gaming won’t divulge spoilers.

Though it took a few years to release, it’s safe to say that Deltarune Chapter 2 is a success. While Chapter 1 was an enjoyable romp, featuring a story with various twists and turns, Chapter 2 is an improvement in virtually every way. It’s clear that Toby Fox put considerable love into this project, and the fact that it’s available to download at no cost makes it a no-brainer for curious gamers. If I were to levy any criticism toward Chapter 2, it’s that it’s over too soon, though this is a credit more so toward Fox’s work than anything else. Both Deltarune Chapters 1 and 2 are entirely free, with subsequent chapters able to be purchased once they’re released.

Interestingly, only Chapter 1 was intended to be free. However, following a challenging 2020 for many, Toby Fox decided to release Chapter 2 for free as well. On the official game website’s blog, Fox explained, “The world has been really tough for everybody recently. So I decided to release DELTARUNE Chapter 2 for free. I guess like a pet cat that drops bugs at your doorstep, I can, with some pride, show you the weird things I’ve been doing. I’m not sure if it will help, but I hope so.” If the quality seen in Chapter 2 carries over into subsequent entries, Deltarune will be an independent video game to remember.