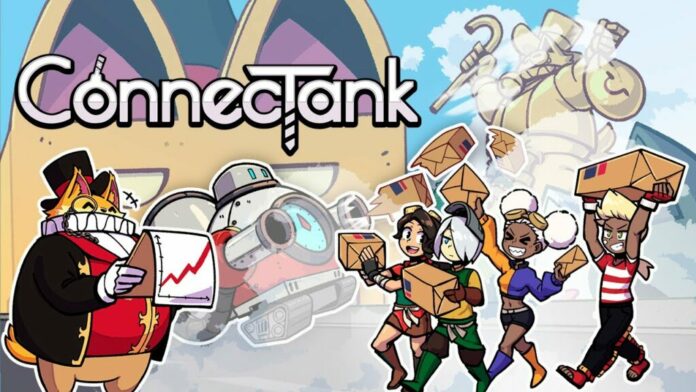 ConnecTank is an upcoming game by YummyYummyTummy and Tamatin Entertainment releasing on multiple consoles and PC on September 28. The strategic puzzle game brings something very intriguing to the video game world as you travel throughout New Pangaea as a Tank Driver doing work for various characters.  ConnecTank is a game that may fly under the radar, much like Staxel, but is worth keeping your eyes on.

ConnecTank Review: Satire, Puzzles, and Strategy With a Hint of Tedium

Marx Would Be Proud

One of the things that immediately stand out about ConnecTank is the overwhelming satire it uses throughout the game.  The characters, the dialogue, and even the missions are purposeful jabs at different economic systems and those in power.  You may think I’m exaggerating but one of the very first characters you meet is Finneas Fat Cat, who is well…a very rotund and rich cat who not so subtly represents capitalism (fat cat is a term generally used as an insult to rich people).  Finneas has a greed that would make Mr. Krabs himself blush.  These characters alone are a fantastic addition to the game but it is their dialogue and personalities that take it over the top, during one mission Finneas laments about his issues getting staff for his business despite offering a lunch break AND a bathroom break. The game even makes some funny jabs at how on the nose its characters are with Pontius Penguin pointing out how Finneas Fat Cat being a literal fat cat is anything but subtle. It is this character and great writing that provides some added fun to a game that would otherwise be very repetitive.

At first, I thought ConnecTank was far too easy but as the game added layers my strategy became more important for completing the mission.  Do I choose the route with the least number of enemies? Do I take a route with more enemies who are easier to beat? Do I take the route that has the best possibility of giving me powerful ammo? All of these options await you and are key to how easy or difficult it will be to finish a mission.  As I began to learn what enemies were easier to defeat and what ammo I needed to achieve victory I felt like a skilled strategist and there was a wonderful sense of pride that came with that.

This strategic element was essential because the battles themselves rarely had me on the back foot, once I had my conveyor belt built it was easy to overwhelm the enemy and win.  Even when ConnecTank tried to throw monsters or part breakdowns my way they very rarely knocked me off my rhythm.  This may be because I was too good at avoiding difficult enemies when plotting my course through the levels but I think it’s mostly because the gameplay itself can only reach a low level of difficulty.

ConnecTank is a tough one, to sum up because there’s so much good to this game and I’d love to see more people give it a shot just for its characters, comedic moments, and strategy elements.  Unfortunately, the core gameplay is tedious because there is only so much that the game can offer in battles and the battles are 80% of the game making it difficult to ignore how uninspired that aspect of the game is. Ultimately, I can’t score ConnecTank too high because it failed to pull me in, if you enjoy the battle system more than me then this will no doubt be a game you could love but for me, it has to be

Is Age of Calamity A Worthy Breath of the Wild Prequel?...