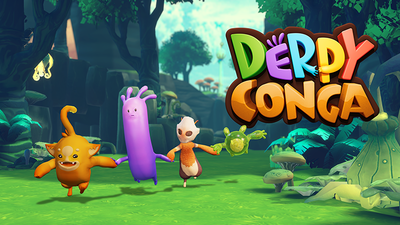 Derpy Conga is an upcoming game from Giant Door that doesn’t yet have a solid release date.  Despite that we decided to play the Derpy Conga demo which is available on the Nintendo eshop and give some of our thoughts on the game as we have done in the past with titles like Arietta of Spirits, and Ultra Age.

The main thing that struck as we played this game is that the controls and camera are not very good.  For a self-professed “physics-based puzzle platformer” the controls and camera are two things that are essential for the developers to get right.  Unfortunately, in the Derpy Conga demo, this didn’t seem to be the case.  The camera especially has a mind of its own at times even when the player positions it in a good spot it can move away at any point.

The controls especially are a massive issue as they aren’t the fun kind of frustrating they’re just aggravating, everything is too loose and all over the place to be enjoyable.

It’s unfortunate that the core aspects let the game down because the idea is a good one and if executed well it could deliver a unique and challenging experience.

The plot and graphics are simple and can’t be criticized as Giant Door is a smaller, newer studio, and the fact that the terrains in the game look good is a credit to their work.

As always, the aim of a demo is to entice a player to buy the full game.  Did the Derpy Conga demo achieve this? Not at all. I will admit that playing this game alone may have been a poor choice and playing it with friends may open it up to some wacky multiplayer fun.  The controls open the door for some multiplayer chaos and would no doubt make for a good time if played with friends.

As a single-player experience, Derpy Conga just isn’t strong enough to justify the purchase based on the demo gameplay.