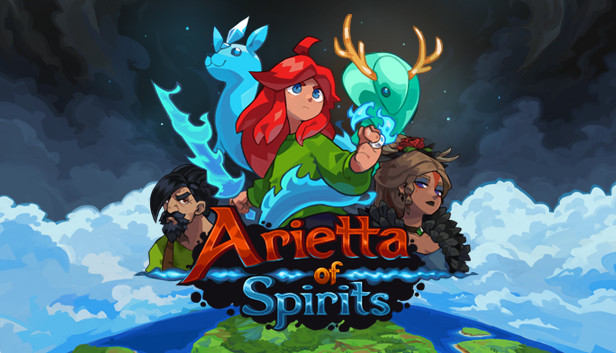 In a few days’ time, RED ART GAMES will release Arietta of Spirits, a game developed by Third Spirit Games.  In anticipation of the game’s release, they have released a demo for the game on the Nintendo Switch eShop.  We have played the demo and are going to give some quick thoughts on the glimpse of the game we got.

The game is advertised as a narrative-driven, charming, adventure game.  And it lives up to that mantle from the glimpse we got of the game.  It has all the normal tropes of an adventure game and does them very well, I enjoy that the game directs you from point to point, too often nowadays a game will just give you directions and let them do them at your leisure.  This game doesn’t go that route, instead making sure it carries you from beat to beat in the story.

The adventuring itself is a joy, the simplistic controls are easy to get to grips with and you’ll find yourself chopping down enemies with ease.  What enhances the adventuring to me is the sounds, the audio in a game can either be fine at best or enhance it (like with Persona 3), with Arietta of Spirits the audio enhances the experience.  As you’re adventuring you hear the sounds of nature, the wind blowing, the enemies buzzing, squirrels in trees making squirrelly noises, it adds so much to the atmosphere of the game.

One issue with the demo is that it didn’t do enough to establish the longer storyline of the game.  Where we cut off, the main character Arietta has just been attacked by spirits in a dream before getting saved by a flashing bolt.  And that’s it, we get no indication of what the bolt is or what that could mean for the setting.  Add that to the bland interactions between the characters and you have a game that never really tries to hook you in with its narrative.

At the end of the day the goal of a demo is to entice the player to part with their money for the full game.  Did the Arietta of Spirits demo accomplish this?  We think yes!  The game is indeed very charming and the adventuring was fun enough to make me want to come back for more.  While I wish they had gone just a few minutes longer to explore the story a bit more I can’t deny that I was considering buying the full game when this demo ended.

Check out Arietta of Spirits on the Nintendo eShop and play the demo for yourself!