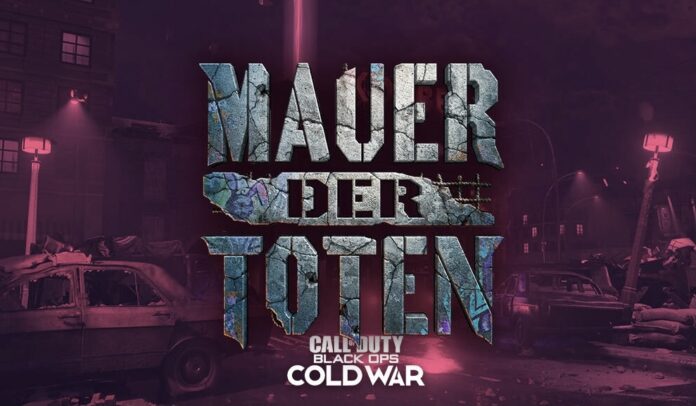 NCall Of Duty brings zombie terror this Thursday, as the new map Mauer Der Toten is released. Following up Firebase Z, Treyarch are shifting the focus to a zombie infested Berlin.

The latest addition to Cold War’s zombie cycle has been anticipated for a little over five months. Here is where we are picking up from:

“The events of “Die Maschine,” “Firebase Z,” and Outbreak have all led up to “Mauer der Toten,” Treyarch’s newest round-based Zombies map where captured Requiem agents will have to do Kravchenko’s bidding in exchange for their freedom… and their lives.”

With the stakes raised to a terrifying degree, this can only mean a full dose of undead chaos

Fans of the beloved game-mode will no doubt be excited to return to Berlin. With classic map Kino Der Toten still ringing true in our hearts, we wonder whether the rumours of a remake akin to Nacht Der Untoten ala Die Maschine are true. We certainly hope so. If there is going to be carnage, it is always better on the big screen.

The gore-tastic trailer also showcases an underground train station. Home to claustrophobic areas of horror, Treyarch seem to be leaning more into the grizzly nature of Zombies fans return in droves for. With the blistering speed of an oncoming train adding more danger, skirmishes with the undead are set to be wild.

What is exciting to see, is the amount of verticality available. Be it the roof-to-roof ziplines or shortcuts around the map, Mauer Der Toten seems to have a lot of tricks up its sleeves.

It wouldn’t be a proper zombie release, if there were no new wonder weapons. Joining the massive arsenal of firepower is the relentless CRBR-S. Complimented by four different variations, the Ray-Gun style handgun absolutely decimates anything in its path. Following the success of the “Ray-Rifle” in Firebase Z, this new pocket sized weapon seems to be upping the ante.

The mysteries of Mauer Der Toten are sure to ignite the community’s fire once again. A day after the map has launched, the next full Easter Egg will be available for completion. With a fanbase as avid as this, it won’t be surprising if it completed in record time.

Will you be fighting the undead? Let us know over at our Twitter feed.