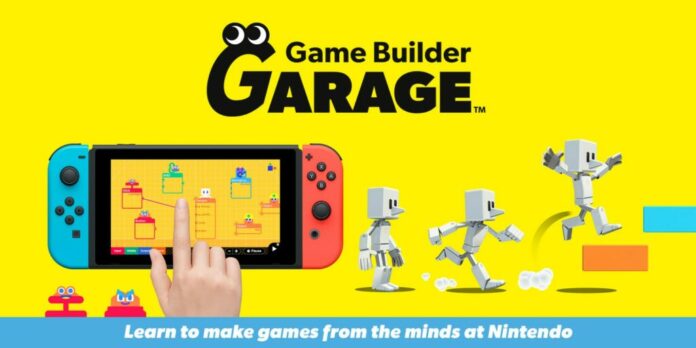 There’s something to be said about video games where developers put the player in the driver’s seat. Dreams, which released on the PlayStation 4 early last year, showed incredible potential in this sense. It provided players with the tools needed to create their own experiences, many of which showed tremendous promise. As for Nintendo, the Super Mario Maker series provided similar tools, effectively giving players the proverbial keys to the kingdom of perhaps the most important video game series ever. When Nintendo Labo launched in 2018, however, few expected that it would inspire a Nintendo Switch title that released last month. Let’s take a deeper dive into this Game Builder Garage review.

For context, Nintendo Labo was a toys-to-life concept that utilized cardboard accessories, which players built, to bring gaming experiences to life. While its shelf life was short-lived, it was a curious foray in game development. One of the sections of the program was the Toy-Con Garage, which allowed players to create unique in-game applications with the Joy-Con. This creative application would prove to be the blueprint for Game Builder Garage. Stripping away the aforementioned cardboard, Game Builder Garage is all about learning how to create games, albeit in a fashion that’s very on-brand for Nintendo. How well does it excel in teaching aspiring game programmers the basics? Let’s get to the Game Builder Garage review proper.

Game Builder Garage is separated into two categories: Interactive Lessons and Free Programming. Interactive Lessons contains a series of step-by-step tutorials on how to create certain games; this is where the core of Game Builder Garage exists. From a simple game of tag to a side-scrolling shoot-em-up to a 3D racer to a 3D action platformer, these lessons cover multiple game genres. As is the case with Nintendo, the game development process is made simple yet engaging, appealing to players of different ages and gaming experience levels.

This is done via the cast of personalities within Game Builder Garage. The Nodons, which are prevalent through the game, trigger in-game characters and events. For example, to bring your main character into the game, drop in a Person Nodon. To give said Person Nodon the ability to move, connect a Stick Nodon. As players complete subsequent lessons, they learn about other Nodons and how they interact with one another. Bob and Alice, which are floating orbs that provide instructions during each lesson, become prominent fixtures in Interactive Lessons. This level of personality ensures that learning about game development within Game Builder Garage is never dull.

In between lessons are a series of quizzes known as Checkpoints. These Checkpoints test players on what they learned during the prior lessons, tasking them to complete certain goals. These include, but aren’t limited to, giving the player character movement and providing a car with the ability to stop and go. These Checkpoint sections help players retain information, which will come in handy in Game Builder Garage‘s second mode…

The other aspect of Game Builder Garage, Free Programming as mentioned earlier, is where the true magic happens. Essentially, players can take what they learned in Interactive Lessons and apply it to an open platform, opening the floodgates for a number of projects. Despite the fact that the game has only been available for a few weeks, as of this writing, there are many incredible Game Builder Garage levels floating around online. These show the potential this game has and, just as importantly, what newcomers may be able to create if they put in the effort. In other words, there’s more to Game Builder Garage under the hood.

Free Programming creations can be shared online, which means that others can experience them. This is one of the areas where Game Builder Garage falters, however. In lieu of a community function, similar to what Super Mario Maker 2 has for level sharing, Game Builder Garage uses codes. To access user-generated content, players must input specific download codes. The lack of a dedicated online community within the game is a tremendous oversight. In fact, one can argue that the lack of direct feedback could deter curious minds from creating and sharing their own projects.

It’s not difficult to find promising creations with a simple Google search, but an in-game online sharing feature is sorely missed.

With all of this said, is Game Builder Garage worthwhile? The answer to this question largely depends on the mindset one goes into the game with. Keep in mind that this isn’t a traditional video game. Rather, it’s an application for game development. This isn’t Super Mario Maker 2 where, despite the focus on level creation, a full-fledged game exists within it. Game Builder Garage is all about building levels and projects from the ground up. This isn’t to say that the game lacks value for those uninterested in game development. This is where the user-generated content mentioned earlier comes into play.

Within days of Game Builder Garage‘s initial release, a number of promising projects hit the internet. Everything from a first-person shooter level inspired by Doom Eternal to a Super Mario Kart track to a recreation of Minecraft can be seen and downloaded right now. Furthermore, even without an online sharing option in the game, there are fan communities that ensure such creations are found and experienced. YouTube channels such as GameXplain have been actively showcasing many of the best Game Builder Garage creations, generating that much more awareness. If you’re willing to do some digging online, you can find an ever-growing treasure trove of concepts waiting to blossom.

At $30 USD, Game Builder Garage is a worthwhile investment for budding developers and curious gamers alike.