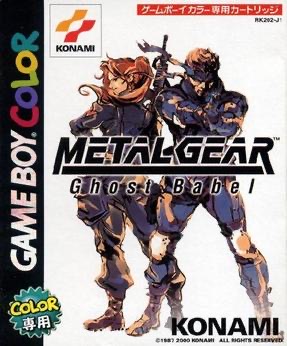 Gaming has a rich history that spans multiple decades. To this end, The Last Word on Gaming Backlog is a series that looks back on titles across all generations. From the golden 8-bit era to the landscape-changing 64-bit scene and beyond, The LWOG Backlog’s aim is history. This week’s edition of the Backlog shifts its focus to the Game Boy Color, highlighting an underrated game in its library – Metal Gear Solid for GBC.

The Importance of Ghost Babel

Conceptualized by Hideo Kojima and published by Konami, the company famous for such series as Castlevania, the Metal Gear franchise is one of the most legendary in gaming history. The series began in 1987 with the title simply known as Metal Gear. From there, the series evolved and innovated, whether it was on the Nintendo Entertainment System, PlayStation, or in the case of the topic of this piece, the Game Boy Color. In fact, it’s the GBC title that’s one of the lesser-known in the franchise. Despite this, it remains a gem in the portable system’s lifespan.

Released in Japan as Metal Gear: Ghost Babel, Metal Gear Solid for Game Boy Color is a pseudo-scaled-down remake of the 1998 PS1 classic of the same name. It was developed and published by Konami before being released in 2000. It’s important to note that while many of the mechanics were carried over, the story is completely different. Moreover, it can best be described as a supplementary entry in this long-running series. What makes this a title worth revisiting the GBC? Here’s what inquisitive minds should know.

Metal Gear Solid for GBC takes place in a separate timeline, seven years after the original Metal Gear. A prototype for a new Metal Gear, known as Gander, has been stolen by a guerrilla group in Central Africa, the intention being to use it for their war exploits. To this end, FOXHOUND recruits Solid Snake, who retired following the original title before relocating to Alaska. Colonel Campbell provides Snake with clear instructions: infiltrate the area formerly known as Outer Heaven, now known as Galuade, for one more mission.

In terms of story, Metal Gear Solid for GBC is very much in line with other entries in the series. The stakes are high and it feels like the mission at hand is one that is truly life or death. What’s also impressive about the story is the opening cutscene that tells it. The fact that a GBC would have a cutscene almost 15 minutes long is telling of this title’s quality. However, to truly be considered a Metal Gear game, it has to play like one, which is exactly what the entry alternatively titled Ghost Babel does.

Not unlike older entries in the series, Metal Gear Solid for GBC plays like an overhead 2D action game focused on stealth. As Solid Snake infiltrates the enemy’s perimeters, he must evade enemies, keeping out of sight by either hiding behind obstacles, crawling through air ducts, and following the advice provided via the Codec. If one has ever played an MSG game, the premise isn’t much different from a gameplay standpoint. Rather, mechanics and philosophies are remade to fit the limited hardware of the GBC.

Evading enemies may be easier said than done, however, especially given their intelligence. In addition to having sights that allow them to detect intruders, they may pick up on noise that Snake makes, which will prompt them to investigate certain areas. If Snake is spotted, he will either have to flee to hide or engage in combat. Snake isn’t short of offensive maneuvers, especially when he finds weaponry throughout the game’s 13 stages. However, to achieve the best score, stealth should be prioritized.

For those that are partial to the 3D entries in the franchise, Metal Gear Solid for GBC takes some getting used to. However, many of the series’ conventions have been brought over, translating well to this portable platform. This doesn’t even begin to touch on the supplementary modes, which we will discuss later. Metal Gear Solid for GBC is an ambitious title in many ways, gameplay included.

From the opening cutscene discussed earlier to the minute-to-minute gameplay, Metal Gear Solid for GBC makes the most of the system’s capabilities. The opening cutscene alone is early evidence that this will be a different beast on the GBC. While it may not be the most technically impressive game in the series, it may be the best-looking game on the platform itself. It’s easy enough to make out environments, differentiating Snake from everything else on the screen. Visually, Ghost Babel hits the mark.

From a sound perspective, Metal Gear Solid for GBC gets things right as well. Many iconic tunes make their return here, such as when a stage begins or when one is completed, not to mention the iconic “Game Over” jingle. Ghost Babel’s soundtrack is equal parts tense and thrilling, capturing the mood of the Metal Gear series perfectly. The game was composed by Kazuki Muraoka and Norihiko Hibino, the latter of whom composed music for other MGS solid games, including Sons of Liberty for PlayStation 2 and Guns of the Patriots for PlayStation 3.

When it comes to value, Metal Gear Solid for GBC is jam-packed. A single playthrough can take a seasoned player anywhere from 10 to 12 hours to complete. However, it’s important to note that, at the end of each stage, the player is given a score based on their performance. Depending on how invested a player is, they may wish to replay certain stages to achieve the best rank possible. Even if one simply wishes to reach the end credits, the main campaign is substantial for a GBC game. However, this isn’t all that Ghost Babel has to offer concerning value.

In addition to the aforementioned campaign, Metal Gear Solid for GBC has a VR Training mode, which consists of 180 training missions. These are used to help players hone their skills, from sneaking to the utilization of firearms; players that are familiar with Metal Gear Solid: VR Missions will feel right at home here. This doesn’t even begin to touch on the VS. Battle mode, which requires two players to link up via the GBC Game Link Cable. For being a portable game, Ghost Babel offers plenty that will have avid gamers coming back.

Upon its release, Metal Gear Solid for GBC reviewed incredibly well. Various publications lauded the title, even considering it the best Game Boy Color game ever. This is high praise, to say the least; keep in mind that this is the same platform that offers such experiences as Pokemon Gold, Silver, and Crystal, as well as The Legend of Zelda: Oracle of Seasons/Ages. MSG stands alongside them as one of the essential titles to play on the platform.

Taking a game that hit its stride in 3D gaming and scaling it down to a 2D environment isn’t a simple endeavor. Given that there is less to work with in 2D, sacrifices may have to be made. However, the Game Boy Color edition of Metal Gear Solid was able to provide an experience all its own. Not only is it the same MSG action fans have come to expect but it can be experienced in the palms of their hands.