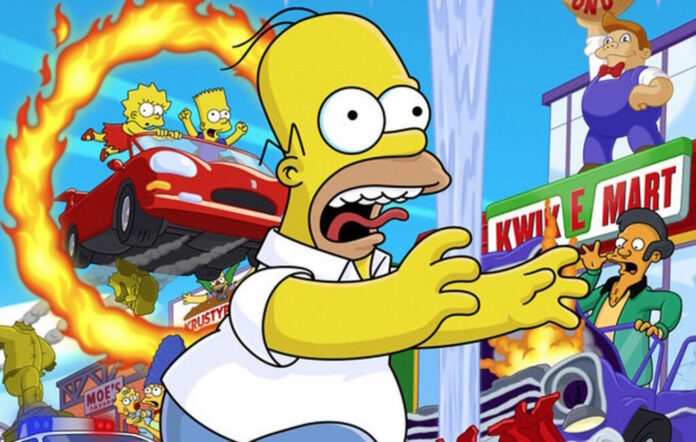 When it comes to the PlayStation 2 there are many games that are heralded as classics to this day by its fanbase.  This isn’t without merit as the PS2 is without a doubt one of the best consoles ever with a deep library of some of the best video games ever made.  Games like Persona 3 FES, Shadow Of The Colossus, Beyond Good & Evil, and many others stand the test of time.  Today we’re going to be looking at The Simpsons: Hit & Run to discuss whether or not it holds up in the hands of a player in 2021.  The Simpsons: Hit & Run currently has an 8.6 out of 10 user score on Metacritic which currently puts it ahead of Super Mario 3D World + Bowser’s Fury by 0.1 of a point.  Is this deserved?  Well, let’s discuss that.

The Simpsons: Hit & Run – The Positives

Even from the perspective of a player in 2021 the driving in this game is good.  Too often modern games have driving mechanics that are as tight as your favorite jeans after the holidays.  The driving is loose in this game but controls pretty well and is one of the highlights of the game, which is essential as driving is about 80% of the gameplay.

This game achieved a feat that not many video games based on popular franchises accomplished, it has the same voice cast as the show.  This helps the game immensely as you can truly become immersed in the world of Springfield without being ripped out of it by a strange new voice coming out of your favorite character, looking at YOU Mr. Krabs from Spongebob Squarepants: Battle for Bikini Bottom.  The immersion is a big bonus to the game as it looks, sounds, and feels like you’re a part of the world of The Simpsons.

The Simpsons: Hit & Run – The Negatives

The platforming in this game is tacked on and needlessly difficult.  It didn’t control well at the time but with modern eyes, it is much, much worse.  Thankfully the platforming isn’t essential to the game but the difficulty of the platforming does drive you away from doing any of the side stuff.  Springfield is full of gags, cards, and spy cameras to engage with but the game makes it an annoying experience to reach them.  The cards especially are usually pretty delicately placed and one wrong move will send you packing, as someone who has collected them all it was not at all a fun experience.

This game is tediously repetitive.  Within the first two levels, you will have played four race missions, three missions about getting away from a target, three missions about following a van, and knocked things out of a truck to collect twice.  This is pretty much it as far as mission types go, as the game goes on it gets more and more tedious.  This is made worse as they do introduce some new twists to the mission types for the final level, meaning that they were creative enough to come up with ways to spice up the gameplay, they just didn’t.  This makes the game a real slog to get through once you get to Level 4 and are just repeating the same missions, in the same map, except this time you’re Marge Simpson instead of Homer Simpson.  Modern-day games have become much better at keeping the player engaged for the entirety of the game and this is one area where The Simpsons: Hit & Run is really lacking.

The game halting progress to a standstill at various points is another issue the game had.  The number of times you need to be wearing a certain outfit or driving a certain car to even play a mission makes whats should be a fun addition into a chore.  While playing through I never buy costumes or cars that I want as I know this will set me back later on when I am forced to buy Marge Simpson’s cop outfit to progress.  This is a mechanic that is pretty dated as a 2021 player.  While side missions and extra bits can often be hidden behind a block like this it’s not very often we see the main story of a game ground to a halt in this fashion.  It wasn’t a particularly fun mechanic back then and it is not a fun mechanic now.

Does It Hold Up?

The short answer is that yes this game is certainly playable today and you’ll enjoy picking it up and playing it.  The long answer, however, is no.  The nature of games has changed drastically since this game was released and most players in 2021 will either get bored of the repetitive gameplay or put off by some of the outdated mechanics.