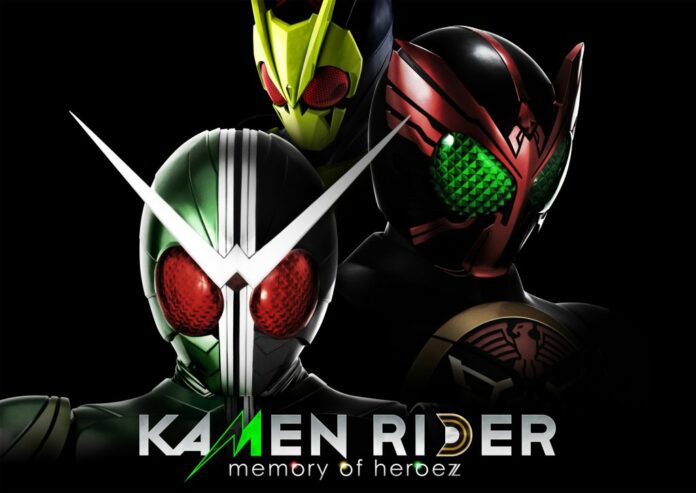 Beginning in 1971, Kamen Rider is one of the longest-running TV series in the tokusatsu genre. Tokusatsu is a genre applied to Japanese live-action productions that use special effects; this would give birth to certain American series in the same vein, including Power Rangers. Kamen Rider consists of several seasons featuring armored superheroes, most of whom possess insect motifs, as they battle nefarious forces. The series in question has spawned seemingly endless merchandise, from action figures to roleplaying weapons to video games. In terms of the latter, let’s cover the most recent video game entry in this long-running Japanese franchise – Kamen Rider: Memory of Heroez.

Developed by Natsume-Atari and published by Bandai Namco, seeing a 2020 release, Kamen Rider: Memory of Heroez is a beat-em-up title with RPG elements. It was released on the PlayStation 4 in addition to the Nintendo Switch. Additionally, it features the series’ current Rider, at the time, Kamen Rider Zero-One, as well as fan-favorite characters Kamen Rider W and Kamen Rider OOO. Its story is entirely unique from the TV series, too.

Kamen Rider: Memory of Heroez isn’t available nationally for North American gamers. This isn’t to say that players from this region are out of luck. In Singapore, the game was released with Japanese voiceovers and English subtitles. It was also released on different online marketplaces. Keep in mind that both the PlayStation 4 and Nintendo Switch are region-free consoles, meaning that they will play all games from around the world. The same rule applies to Memory of Heroez, so if you’re still considering it, there will be no risk involved on your part.

Kamen Rider: Memory of Heroez opens with Kamen Rider Zero-One arriving at a nearby building to investigate a strange occurrence. Before he knows it, Zero-One is ambushed by an ominous figure known as Zeus. Zero-One is attacked by the interloper, immediately setting the stage for a great evil to overcome. Who, exactly, is Zeus? How did he come into the power he possesses?

Soon thereafter, the game shifts to Shotaro Hidari, a detective from the Narumi Detective Agency located in the city of Futo. Along with Philip, Hidari can don the armor of Kamen Rider W, the two-in-one detective. Hidari is tasked with inspecting Sector City, per an email from a client, requesting him to locate a woman named Professor Aida. Much like Zero-One, W encounters Zeus as well. This triggers a series of events into motion that sees W join forces with other Kamen Riders. The heroes’ collective goal is to explore Sector City and unravel the mystery surrounding Aida, Zeus, and the city itself.

Kamen Rider: Memory of Heroez is broken up into different sections. Essentially, in each section, there are multiple areas that trigger battles. As one of numerous Kamen Riders, the player must defeat the enemies, stringing together combos along the way. Based on the combo chain and the damage dealt, the player is given a letter score, the highest being “SSS.” The higher the score, the more the player earns in terms of Energy Elements and Enemy Codes.

One of the main components of Kamen Rider: Memory of Heroez‘s gameplay is switching between Rider forms during battle. For example, W consists of nine unique forms and one final form in Cyclone Joker Xtreme. Switching between forms allows for bigger combos. For instance, a player can use W’s base Cyclone Joker form for close-range combat, shift to Heat Metal for crowd control with wide-range offense, before picking off foes from a distance with Luna Trigger. Memory of Heroez’ gameplay isn’t necessarily deep, but this gameplay mechanic keeps things exciting.

To unlock new abilities and buffs, Energy Elements and Enemy Codes must be used. These are collected when navigating areas and completing battles. Energy Elements are, effectively, experience points in Memory of Heroez. By using these, Kamen Riders can level up their stats, such as increased power and new techniques learned. Meanwhile, Enemy Codes unlock Accelerators. Not unlike armor in standard RPGs, Accelerators can be equipped for stat boots. These include, but aren’t limited to, increased HP and pickups upon completing battles. Energy Elements and Enemy Codes offer an RPG-like feel to Memory of Heroez, allowing players to feel a sense of progression.

Memory of Heroez isn’t perfect, however. One area of criticism is in its exploration or lack thereof; this is a linear game, meaning that there isn’t much room to go off the beaten path. There are no side quests to speak of, meaning that the main quest will always take center stage. Additionally, the game can become repetitive. There’s not much to the gameplay apart from moving from one enemy area to the next. While the combat can be fun, albeit mindless at times, it won’t take long for the player to realize they are, effectively, repeatedly doing the same thing.

When it comes to controls, Kamen Rider: Memory of Heroez does the job well. The game proper opens up with a tutorial section, where the player takes on the role of civilian Shotaro Hidari. From there, the player will become familiar with everything from jumping to striking to combo sequences. Memory of Heroez eases the player into its gameplay. Furthermore, the controls aren’t terribly difficult to understand. After a few battles, players will find themselves taking to the fight to footsoldiers with ease. While Memory of Heroez can be criticized in various areas, it can’t be said that it controls poorly.

This is one of the main areas where Kamen Rider: Memory of Heroez falls flat. Simply put, this is a game that looks like it belongs to the previous console generation. Textures appear flat, environments are dull and uninspired, and there seems to be a lack of polish to everything. Granted, one may argue that these are excusable, as Memory of Heroez is a licensed game. However, throughout the game’s 11-to-12 hour run time, the presentation may be a point of contention.

With that said, Memory of Heroez doesn’t falter when it comes to the Kamen Riders themselves. Graphical weaknesses and all, the game presents the heroes as they appeared in their respective seasons. This goes for the various forms they possess as well. To see these beloved characters in video game form, not to mention look as good as they do, is a treat for longtime Kamen Rider fans. Just don’t expect a graphical showcase from Memory of Heroez.

The graphical presentation isn’t the only area where Kamen Rider: Memory of Heroez feels uninspired. The game’s soundtrack isn’t one that will stick with players. While songs are fine for the purposes they serve, whether it’s traversing Sector City or battling said city’s various threats, they are anything but memorable. You will hear certain tracks multiple times throughout the game. However, once the end credits roll and the game is set by the wayside, they won’t stick around.

This cannot be said for Memory of Heroez’s theme song, “Over Again.” Aya Kamiki and TAKUYA provided the theme song for Kamen Rider W, “W-B-X,” more than a decade prior to this game’s release. To hear them come back once more is a nostalgia trip, to say the least. Furthermore, “Over Again” shares the same tone as “W-B-X,” almost as if the former is a theme song for a Kamen Rider W second season or reunion show. In a sea of uninspired tunes, “Over Again” is a musical treat that one will want to hear, for lack of better terms, over and over again.

7.5 Out of 10: The question must be asked: does this game satiate Kamen Rider and beat-em-up fans? For Kamen Rider fans, Memory of Heroez is a fan service-loaded experience. From seeing different Riders work together to hearing tunes from the show’s history and beyond, Memory of Heroez will put a smile on any Kamen Rider enthusiast’s face. However, beat-em-up fans will be tougher to impress. While the game is fun when pulling off combo sequences, the overall experience is repetitive, the graphics aren’t the best, and there simply isn’t enough meat on the bones to warrant the price, especially when importing from overseas.