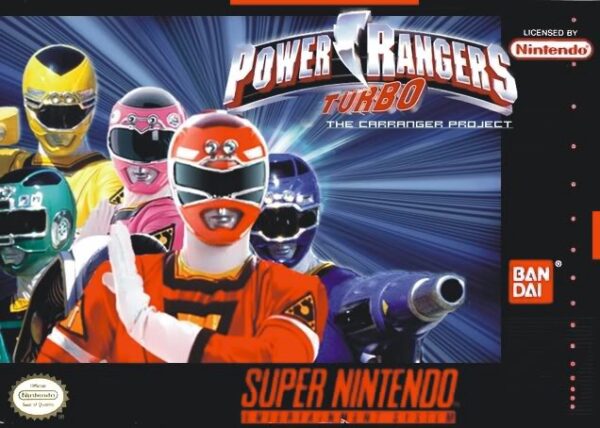 Gaming has a rich history that spans multiple decades. To this end, The Last Word on Gaming Backlog is a series that looks back on titles across all generations. From the golden 8-bit era to the landscape-changing 64-bit scene and beyond, The LWOG Backlog’s aim is history. For this installment, we shift our focus to a game is nothing short of “Morphenomenal,” as we take a look at Mighty Morphin’ Power Rangers for the Super Nintendo.

Mighty Morphin’ Power Rangers – May the Power Protect You

Rewind to the early-to-mid 1990s. During this time, there were few franchises as popular as Mighty Morphin’ Power Rangers. This children’s show focused on five teenagers with attitude, transforming into colorful heroes to battle the forces of evil, was unlike anything else on TV. One of the reasons for this was that it utilized action footage from a Japanese series called Super Sentai in conjunction with original American footage. MMPR was widespread, to say the least. It spawned everything from action figures to trading cards to a feature film and beyond. In other words, Power Rangers was more than a show – it was a cultural phenomenon.

This isn’t to say that Power Rangers ended during this period. In fact, the series is still going strong under the ownership of Hasbro. However, it can be argued that it was during the 90s when Power Rangers fever was at its absolute highest. With a property as popular as this, it would make sense for video games featuring the license to be created. Power Rangers games have been aplenty, with titles appearing on the Game Boy, the Nintendo 64, the original Sony PlayStation, and more. Today, however, we will be taking a deep dive into the Super Nintendo beat-em-up simply titled Mighty Morphin’ Power Rangers, developed by Natsume and published by Bandai. This title was released in North America in 1994 and Japan in 1995.

The story of Mighty Morphin’ Power Rangers for the SNES is relatively simple. However, it’s very much in line with the show. The main antagonist, Rita Repulsa, is determined to take over Angel Grove, California before setting her sights on Earth at large. In response, the Mighty Morphin’ Power Rangers, chosen by the interdimensional wizard known as Zordon, must battle Rita’s various foes, thwarting her plans of world domination in the process.

Needless to say, the story of Mighty Morphin’ Power Rangers can best be described as straightforward. However, what makes this particular story unique is how it utilizes actual monsters from the TV show. From various types of Putties to stage bosses including Bones, Eye Guy, and the Dark Warrior, there is a surprising amount of fan service at play. The game’s narrative won’t set any gamer’s world on fire, but for those that familiar with the TV show, there’s an impressive amount of detail to be seen.

Mighty Morphin’ Power Rangers for the SNES is a side-scrolling beat-em-up, not unlike Knights of the Round or Teenage Mutant Ninja Turtles: Turtles in Time. However, whereas those had more freedom in terms of movement, MMPR locks the player on a single plane. This may seem limiting, but the rest of the game is built around this. Seldom will the player feel like they’ve been the recipient of a cheap spot, especially since the game itself is fairly easy.

Before starting a stage, the player will choose to play as one of the five original Power Rangers. Each Ranger plays similarly, though the Pink Ranger, Kimberly, has a unique weapon in the form of the Power Bow. This is a long-range weapon, and unlike her teammates, she can fire arrows at will. The first five stages, or areas, follow a specific formula: the player starts with a Ranger in their civilian form. Once the area’s boss is encountered for the first time, Ranger will transform, or “morph,” into their respective Ranger form. The final two areas are Megazord battles, which require more strategy to overcome. These areas are where MMPR is at its most challenging.

Despite the fact that MMPR is easier compared to most beat-em-ups on the SNES, there are multiple pick-ups available throughout stages. Among these are capsules that replenish the Rangers’ special attacks, which come in handy during boss fights. Outside of the bosses in question, players will primarily battle Putties, which can wield anything from knives to swords to even firearms. Even if MMPR lacks challenge, this is an entry-level beat-em-up that’s seldom dull.

Like other SNES beat-em-ups, Mighty Morphin’ Power Rangers is incredibly colorful. From the bright and sunny Angel Grove to dark and dreary caves, this is one title that knows how to use color and detail well. In fact, the one area MMPR falters, in terms of visuals, is the Rangers themselves. In the TV show, though they shared the same general appearance, there were cosmetic differences, specifically the helmets depicting certain dinosaurs and creatures. This feature is absent from the game, as each Ranger is a template swap of another.

When it comes to sound, however, MMPR for the SNES shines. The first track that the player will hear is a 16-bit rendition of the original “Go Go Power Rangers,” the theme song of Mighty Morphin’ Power Rangers, complete with vocals. SNES soundtracks seldom featured lyrics, so it was impressive to hear them back in the day. The rest of MMPR’s soundtrack is incredibly solid, too.

The first five areas feature distinct songs, each one action-packed and fitting the 90s vibe of the original show. Don’t be surprised to hear yourself hum these tunes even after the game’s end credits have rolled. MMPR’s soundtrack was produced by two people: Iku Mizutani and Kinuyo Yamashita. Mizutani would work on the music for future Power Rangers games, Natsume Championship Wrestling, and others. Yamashita’s prominent work was the soundtrack for the original Castlevania, though she would score other games, including the Power Blade series and Mega Man X3.

Another area where Mighty Morphin’ Power Rangers falls short is its replayability. In short, it has very little. MMPR has a total of seven areas, five played as a Ranger and two while controlling the Megazord, but nothing beyond this. It’s a shame, to say the least, because this feels like a game that could benefit from bonus stages or additional difficulty modes. As it stands, this is a SNES title that, without nostalgia for the game or the Power Rangers franchise, one will complete and set aside.

On the whole, Mighty Morphin’ Power Rangers for the SNES is an enjoyable, if not easy and simplistic, action game. As stated earlier, there were several Power Rangers games, some of which shared the show’s title. Case and point, MMPR for the Sega Genesis was not a beat-em-up, but instead, a fighting game in the same vein as Street Fighter or Mortal Kombat. The Sega CD version of Mighty Morphin’ Power Rangers was a full-motion video game built entirely around quick-time events; for reference, think Space Ace or Dragon’s Lair.

Power Rangers is a series that has stood the test of time. For children, it’s a must-see show with merchandise that has filled countless birthday and Christmas lists. For adults, it’s a nostalgia wave that has the power to topple unsuspecting 90s kids. In the latter group, among many older fans, it’s the video games that stick to their minds the most. Mighty Morphin’ Power Rangers is worth a look, not only by fans of the TV show but those itching for a beat-em-up to relax to.