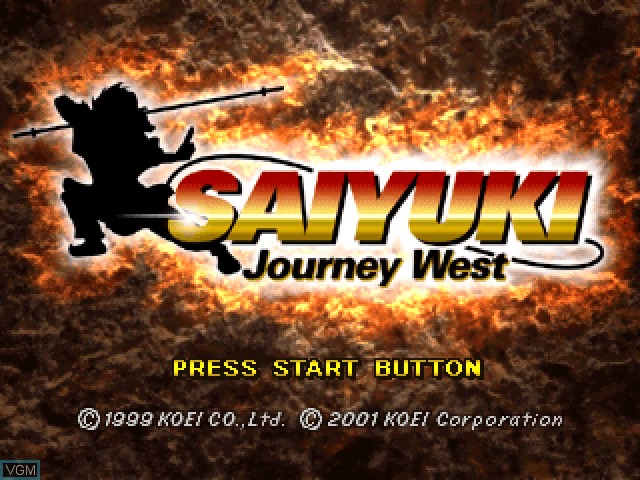 The game begins as the main character Sanzo receives a message from Kannon Bodhisatva. Kannon bestows a quest upon Sanzo and additionally, a staff. Temple priest Homei receives news that the Emperor requests a monk to travel to the Thunder Temple in order to restore peace. Sanzo volunteers after revealing their vision, but; however, is denied. The next day, Homei reveals that, in a dream, he is to send Sanzo to fulfill the Emperor’s orders. Homei is more certain of his decision when Sanzo reveals the staff Kannon provided them.

While traveling, monsters attack Sanzo on a hillside and kills their guards. A voice calls to Sanzo from a large rock offering assistance, in exchange for being freed. Once the charm from the rock is removed, Goku eliminates all surrounding monsters. Konnan appears and tells Sanzo to find all the guardians and finish their journey to India. Goku initially refuses but is forced to accompany Sanzo by Kannon through a painful spell.

The battle style is turn-based. The player commands characters to move, physically attack, use magic, or end their turn. Guardians can use the Werechange ability to transform into giant monsters. There is; however, a time limit on how long a Guardian can stay in Werebeast form before reverting back to demi-human form. Character and enemy models appear on the battlefield and move forwards, backward, and side to side. When attacking, the damage done or recovered appears on the screen. When a character’s turn is completed, you can choose which direction they will face. Players can use the environment to their advantage to negatively affect enemies or benefit allies. Players gain experience through using spells and attacking enemies.

Pressing the x button chooses and confirms your actions. The L1 and R1 buttons rotate the map. L2 zooms in and out, while R2 moves the camera vertically. Triangle brings up and dismisses the action menu.

When on the world map, the left analog stick moves the cloud around over circles representing places. Pressing O displays shops in cities while pressing X enters the area.

Saiyuki: Journey West is anime based on its’ design and themes. The designer for the game, Akihiro Yamada, is a manga artist and drawer of fantasy imagery. Yamada has done work for numerous other video games as well. Character portraits show multiple different emotions, as do the character’s movements during cutscenes. Imagery and pictures are based on Chinese mythology, but the depiction of attacks is typical in most fantasy-based games.

There is no voice acting in Saiyuki: Journey West. The battle music ranges from soft to medium-paced. Spells, transformations, and attacks have accompanying sounds.