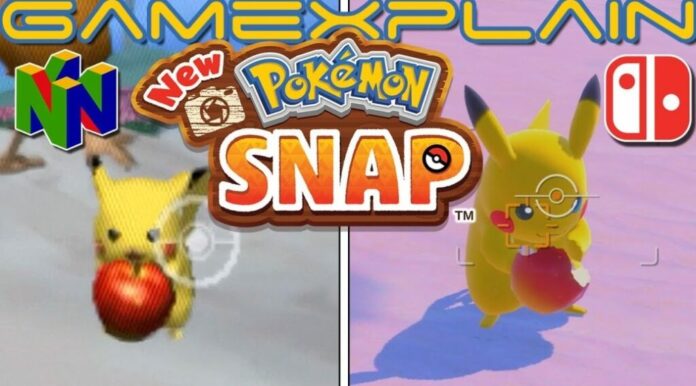 An April release has been slated for the New Pokemon Snap game coming to Nintendo Switch. This is a new and fully HD version follow up to the original Pokemon Snap that was a cult classic on the N64 over 20 years ago.

Pokemon fans rejoice as Pokemon Snap is coming to your Nintendo Switch on April 30th! This game is all about taking photographs of your favourite Pokemon and whilst it may not sound like the most exciting thing in the World, it became a huge hit back on the N64 in 1999.

A Voyage of Discovery

Imagine watching a David Attenborough film about wildlife and studying how they play and nurture each other and that is what you have here but just with slightly more strange creatures. You will be exploring the Lental region where certain Pokemon, according to the Official Nintendo Site , have a glow about them caused by a mysterious phenomenon called ‘illumina.’

Professor Mirror will be with you as you research into what is happening by visiting jungles, deserted lands and vast fields. Your photography skills might just be the key to solving this mystery.

No matter what comes along with the Pokemon name, it is guaranteed to sell in its millions. The phenomenon shows no signs of slowing down at all and even less than perfect entries such as Pokemon Sword and Shield have still gone on to sell incredibly well.

I believe this will be another huge success and for fans will be an absolute must buy. I am a bit on the fence with Pokemon as it isn’t a series that I have ever fallen in love with and Sword and Shield are both fairly average games at heart in my viewpoint with some poor graphics although I will admit that the DLC such as Crown Tundra is an improvement on the core games.

I suspect those with a love for the Pokemon and an eye for photography are about fall in love in a big way! Check out the official trailer below and join the chat about this upcoming game at our chat board!