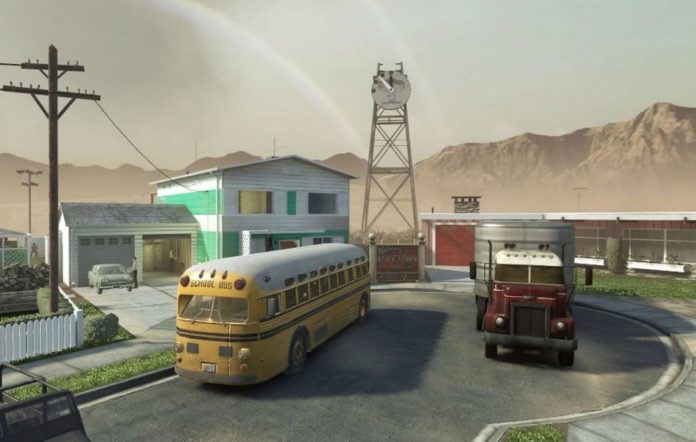 Call of Duty: Blacks Ops – Cold War has seen Nuketown ’84 be released for over a week now. It came with a fresh week of double XP, which was very good to see for gamers. However, now that it has been out for a bit with a chance to play, let’s review what Nuketown has brought us.

Firstly, let’s start with the look. The look for Nuketown ’84 is different, with a mixed aesthetic. However, it really works for this game and the time period that it has been set in. With graffiti all over the map, it certainly has a 1984 vibe to it. The inside of the houses feel much darker than in years past.

The original Nuketown is obviously a model home test site. However, we have also seen things like a very futuristic Nuketown as well. Both of these had the feeling of a much lighter inside where this feels much more rundown and almost harder to see in a way too. Overall, it makes for a nice viewing experience as you play. You get all the classic features of the bus, jeep, cars, and fences from the original Nuketown, whilst also getting the added touch of what 1984 has brought to the place.

For this article, the gameplay is based on the Nuketown 24/7 Moshpit mode. This includes mainly Team Deathmatch as well as Domination and also features Kill Confirmed, although that seemed to come up much less in personal experiences of playing. We’ll talk about the overall map play as well.

For starters, it all depends on what kind of Call of Duty you enjoy. If you enjoyed maps like Shipment and Shoot House in Modern Warfare, this will absolutely be up your alley. Another small but hectic map, there are endless opportunities for kills when playing Nuketown. In domination it is very common to see someone, if not multiple people, drop at least 50 kills. In TDM it is relatively easy to drop at least 20 kills. Possibly even 25 or 30 if you’re on a bad team.

The map plays as it has in the past, with high action but also with some questionable spawns due to how small it is. As someone who has been so/so on the maps so far, this one automatically rises to the top. Knowing the angles is absolutely critical to success though.

As has been the case with Nuketown in the past, holding down a few sightlines is critical in claiming victory. This becomes especially so in Domination when the spawns almost never flip if your whole team doesn’t push. Mid-map control is crucial. It also seems pretty tilted as to what side gets the advantage.

Spawning in the yellow house seems to give easier sight lines for some reason. You can find angles in the middle bus to cover the left side, in the house, or right in front of the bus. You can also use the right side of the map near the car to dominate control of the game. If your team gets stuck on the blue side and can’t make any progress, it can make for a long game. Sitting back and finding a few picks or letting a team overpush is the only way to regain control if you’re playing in a good lobby.

Domination is where this is especially true. Spawning at the yellow house is something that I’ve tried to do as much as possible. Once you get control of the middle of the map, if you have a good team, it can be close to impossible to regain. There are also times where the other team is going to outgun you no matter what. In domination, this can make for a frustrating game mechanic.

When being spawn trapped you almost have to sit back and wait for them to come to you. Most teams will, but if they’re that obsessed with the objective, they might just sit back on the middle of the map and hold you in spawn. The issue with this is that there are so few spawn changes in domination on Nuketown. And even when you finally do, if you don’t cap the flag immediately, you’ll be right back to the old spawn.

The issue is capping the flag alerts the other team have changed, and if your team gets split up, you get wiped anyway. The only simple answer: Hope you’re in a bad lobby and just outgun as many people as you can.

When complaining about spawns you need to be very careful considering what the COD community just went through. Modern Warfare had some of the most broken spawns we have seen in a very long time. With random placements, including on shipment where you could spawn directly into gunfire multiple times in a row.

So, with that being said, the only issue with Nuketown TDM is that the spawns feel random at times. It’s almost the opposite of domination where they flip super fast. This isn’t the worst thing in the world, but it leads to times where you have a one-on-one fight, and then five enemies randomly storm your building. Other than that, you usually reach the score of 100 relatively quickly, with games only taking five to seven minutes to complete.

However, it’s pretty high-paced, especially compared to some other maps like Miami where people just sit around the edges. In Nuketown, you have the snipers alley, but people still love to push the middle and that makes for the best gameplay.

Overall, it’s the same fun old map that has been in tons of Call of Duty games now. However, there is a reason it keeps getting brought back, and that’s because it’s tons of fun. If Nuketown 24/7 is a game mode that stays, it’s an easy one to jump into if you want to play three or four matches in under 30 minutes or so. It’s also a good map to level up weapons as you can rack up kills and play in different styles.

The RC/XD car path is back, which is one of the cooler things to see. Very minor detail but if you use the right side of the yellow backyard you can take a path that takes you all the way to the blue backyard and over a jump without being seen. This allows you to use your RC/XD and get to the other side of the map to surprise enemies.

If you have Black Ops – Cold War but haven’t played much Nuketown, give it a shot. It’s a ton of fun and a great way to level up quickly.

Why the Warzone Juggernaut Needs to be Fixed in Call of...