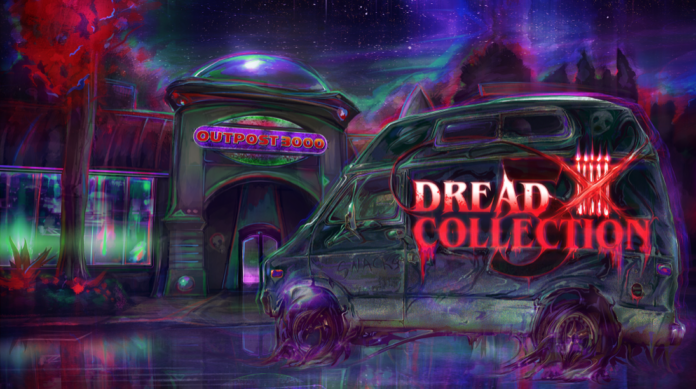 The latest installment in DreadXP‘s popular anthology horror series is now set to release on Friday, May 20, 2022!

Frightening things come to those who wait. Based around the theme of “entertainment”, the new Dread X Collection 5 brings forth twelve delightfully twisted short-form nightmares from the creators of such indie hits as 0°N 0°W, Lakeview Cabin, Sylvio, and The Mortuary Assistant.

The Dread X Collection 5 is Released This Month

Dread X Collection 5 transports players to terrifying locales like haunted nightclubs, dark carnivals, haunted puppet shows, the country Finland in the year 1888, a karaoke bar toilet, and so much more!

Showcasing the handpicked talent of 12 up-and-coming indie talents from around the world, Dread X Collection 5 delivers the scares in the most intense entry yet. Enter a world of broken amusements and haunting television shows in this gripping blend of entertainment-themed contorted horror.

Tying all of the games together is the hub world called Outpost 3000, which was created by Christopher Yabsley (Pigsaw) and features additional development support from indie developer KIRA (Lost in Vivo, Spooky’s Jump Scare Mansion).

Continuing the story of the Dread X universe, you’ll be headed to Outpost 3000: the place every kid dreams of for their birthday. Is it just a harmless alien-themed party venue? Or is something far darker bubbling just below the surface? Steel yourself and face the Stranglemaw, but don’t forget to check out the games on offer….

Roope Tamminen takes us back to Finland in 1888. The locals are celebrating Juhannus, a nightless night in midsummer said to hold magical power. Swept up in the superstitions, you must complete a ritual told to you by your father. But be warned, not everyone wants to see you succeed.

A new, dark experience from Shakles, the creator of Totem. Puzzled by the mysterious disappearances surrounding a large, infamous art gallery, you venture inside only to find yourself in the maw of an interdimensional entity. With no escape, you must find a way to kill it and break yourself out. But, you’re not alone. The paint whispers…

The Book of Blood

The night signals closing time at Pomeroy Grasslands carnival and its employee Trevor volunteers to lock up. Alone in his booth, with a strange book in Lost and Found, a man steps out of the darkness and hands Trevor a note: “let me in.” Stay safe in your trailer by keeping out what is lurking in the dark. The book may be the only answer to survival in this unnatural tales from Darkstone Digital (The Mortuary Assistant)

A late night of karaoke. A wrong turn. Stroboskop’s eerie tale guides you to follow a distant singing voice deep into the dark subway tunnels. An abandoned train station could be your way out, but something is off. Where did the train station come from, and where does it go? All the signs are in a foreign language, the doors are welded shut, and you have a sinking feeling that following that voice was a terrible mistake.

Neal, a retired policeman, finds the courage to investigate the sudden disappearance of 12 children at the Gallagher Sports Centre in 2006 in this offering from VisceralError (The Gallagher Case). Among the vanished is his daughter, Amanda, leading Neal to live the worst night of his life.

Nikk F (SCO: Nukalypse) ushers you into an abandoned daycare where nothing is as it seems. Demons and vengeful spirits haunt the halls, lurking in the shadows. Cries for help echo from its empty halls. It’s up to you to cleanse their souls and bring peace. You are the Spirits’ Guardian.

On a dark and stormy night in 1983, a phone pierces your ears. The mysterious caller informs you that your reclus game developer of a cousin has gone missing. All that was found of him was a note with your contact information and a vague message, “Finish the Game.”

Conner Rush of Fyre Games (Summerland) showcases the twisted secrets of a disturbed mind in this pixelated, first-person, text adventure game inspired by the classic horror of the late 70s and early 80s. Are you prepared to finish the game?

Philip Hasselback from Philisophic Games (Axis Mundi) takes you to a place of twisted memories. When playing through an old game from your childhood, something strange starts happening. The game warps, and reality seems less real. Find out what is going on before it’s too late. But to stop the curse, you need to face the truth.

Colorfiction (0°N 0°W, Ode to a Moon) invites you to the underground rebirth of the legendary Resver nightclub. It’s the twentieth anniversary of the tragic fire that claimed dozens of lives in 1992 and shut the doors of the fabled venue. Rumours of a cladestine resurgence have been swirling for decades and at the very last minute, a coveted invitation arrives for you. It’s time for a night to remember at the resurrected Resver.

Looking to be inspired by Jumanji, iwilliams (Haunted PS1 Madvent Calendar 2021) brings us a malicious board game.  It’s past midnight and mom and dad are gone for the weekend. There’s no better time than now to try playing Ludomalica. It’s just a board game, right? But something feels … wrong. You can’t help but feel that once you cast your die, you’re going to be playing until the end.

A young child falls asleep during a puppet show and awakes alone in an old, musty theater. Finding all the doors to be bricked over, the child must face the darkness that lies backstage beyond the curtains and discover that they may not be alone after all in this first-person, atmospheric horror experience from Matt Reeves (Two Lines, Family is Nothing)

Alfred moved to Hollywood, with nothing more than a few dollars in his pocket, and a dream in his heart. A dream to be front and center as the leading man in a major motion picture. All eyes would be on him, in the INTERIM from PhantomSloth Games (The Bends)

The Dread X Collection series premiered in May 2020 and has since spawned four individual releases, featuring a collective of 41 curated horror shorts from some of the industry’s top independent developers.

Inspired by Game Jam events, each collection has its own thematic concept pointing the featured developers in a similar direction, but they maintain full creative freedom. Dread X Collection 5 raises the total count of horror shorts in the series to 53. 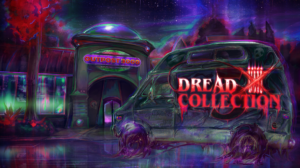 You Should Be Playing Pokémon Café Mix

The Champ Is Here: WWE 2K23 Is Even Stronger With John...