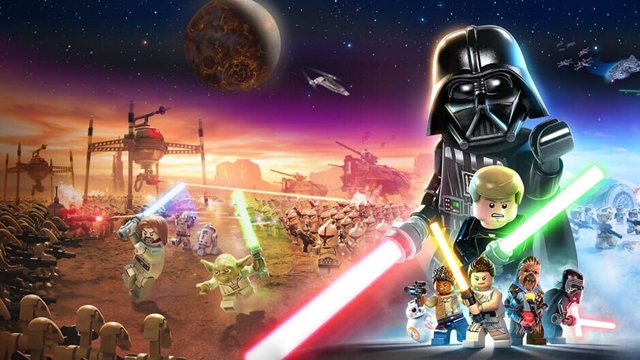 I’m a self-confessed Star Wars nerd with a mantlepiece covered in Lego, so it’s hardly surprising that I was excited for Lego Star Wars: The Skywalker Saga. TT Games has reinvented the formula for Lego games, combining all nine movies with sprawling open worlds and an all-new combat system into a truly unforgettable experience.

The original Lego Star Wars game for the Nintendo DS was one of the first games I ever fell in love with, so the bar for the remake was extremely high. While the game is by no means perfect, it’s a fitting update for a whole new generation of players.

Your journey into the Lego Star Wars universe can begin from any of the three trilogies. I grew up watching the prequels on repeat so naturally I started with episode one, The Phantom Menace. Immediately you are dropped into a spaceship above Naboo and introduced to the new space flight mechanics. While I found the 3D space a little hard to navigate, this is likely because I’ve never played a flight simulator before rather than an indicator of quality. My co-pilot’s only issue was being forced to slow down to roll with the right stick.

Unlike the silent movies of the original games, Lego Star Wars: The Skywalker Saga’s cutscenes are all fully voiced by a stellar cast of actors. I was thrilled to recognise several voices from the Star Wars: The Clone Wars TV series; including Matt Lanter as the titular Anakin Skywalker, James Arnold Taylor as Obi-Wan Kenobi and my personal favourite member of the cast Sam Witwer as two of the franchises’ most iconic villains Darth Maul and Emperor Palpatine.

Diehard fans of Star Wars will be happy to know that originating actors Billy Dee Williams and Anthony Daniels reprised their roles as Lando Calrissian and C-3PO respectively. I’m sure the latter was much more comfortable in his voice acting booth than baking in a golden bucket in the deserts of Tunisia.

A Long Time Ago…

If you find yourself nostalgic for the classic games, the developers have added an optional mumble mode that replaces all the spoken dialogue with the more traditional Lego grunty charades. This is a great novelty feature that makes the cutscenes sound more like a PG-13 version of Happy Tree Friends but I wouldn’t recommend using it for more than a few levels.

Other additional features reminiscent of the originals can be found in the elusive datacards hidden all over the galaxy. These hard to find collectibles unlock special features like dance parties, comedy weapons and looping cantina music that plays even during cutscenes. Hidden in the accessibility settings is the ability to turn off the automatic health regeneration, requiring you to collect the heart lives just like in the old games. Make sure to look for a few of these datacards since this is the only way to obtain the super necessary stud multipliers.

In a Galaxy Far Away

Obviously the biggest change to the Lego series besides voice acting is the addition of vast open hub worlds between each of the levels. They’re filled to the brim with collectibles, puzzles, and characters delivering puntastic one-liners that often had me in stitches. Each section is well balanced with enough content to keep me occupied for hours at a time but not so much that I felt overwhelmed and bored by the busywork.

Besides the previously mentioned datacards, new collectibles include over 1,100 Kyber Bricks, 380 playable characters, 69 starships and 5 capital ships – the last of which are actually additional self-contained hub worlds with their own set of puzzles and collectibles. While these capital ships don’t have much replayability once the objectives have been cleared, they can often be seen hanging ominously in orbit above planets. As if all that weren’t enough, the developers have already announced launch dates for upcoming DLC character packs for Troopers, The Mandalorian Season 2, Rogue One and The Bad Batch.

Though the levels themselves are often on the shorter side, the well thought out sandbox planets allow you to explore the galaxy at your own pace, which for me means chasing after every shiny collectible that pops into view. A lot of the Minikits are hidden in their traditional hiding spots, so if your memory is better than mine you should be able to find several very quickly.

In the Lego games of the past, you could handle almost every combat encounter by furiously mashing the square button. Thanks to the all new combat system implemented in Lego Star Wars: The Skywalker Saga, you now have to contend with blocking, parrying and countering mechanics. There’s an arial assault akin to Marvel’s Spider-Man that lets you launch enemies into the air and perform gravity defying air combinations. The targeted blaster fire produces different injury animations depending on the body part that is hit, you can shoot off helmets, knock characters over and make them hop up and down on the spot clutching their feet.

By updating their combat system to include these more modern elements, TT Games have really brought their series forward into the next generation. In the previous games, the combat always felt like an afterthought to the puzzle-centric gameplay. Now, the combat feels engaging and fun to play with well-choreographed boss fights and the ability to force throw items around at will. Though of course the good old button-mashing techniques will still work wonders.

Not all is perfect in this galaxy far far away. The redesigned character selection screen is fiddly and annoying thanks to the many menus you now need to navigate through. Ironically, I think these changes were made to make the selection easier, with characters now separated into classes instead of the traditional icon grid.

The scavenger tools are introduced far too late in the story unless you mistakenly start with the sequel trilogy. You’re unable to use them until you’ve played as Rey in the story, which is a long time to lock down a feature that’s used so heavily throughout the saga. Fortunately for me, I was able to finagle my way through the majority of the puzzles that required these tools with a grapple hook and a good jump, or by abusing Jango Fett or Boba Fett’s jetpack ability.

After the initial trailer was released back in August 2020, there was much debate about how the new fixed shoulder camera would affect the gameplay. This field of view feels a little too close for my liking, making it hard to see what’s going on around you. I often found that my character’s head would block the aiming circle leaving me unable to see what I was shooting at. When you’re riding one of the game’s many mounts like Banthas, Speeders, or Tauntauns, they often take up large amounts of space on the screen.

This wasn’t so bad when playing single player, but when playing co-op it meant I avoided using the mounts altogether, which is a shame because they make it really easy to maximise both your destruction and your profits.

One of my biggest disappointments was the lack of any character creator, despite being ample room for this in either the cloning facilities of Kamino or the Mos Eisley Cantina that always used to house this feature. Strangely, this feature was actually meant to be included in the game originally but was later removed during development. It seems TT Games wanted to focus on the wealth of characters and costumes they already had at their disposal instead of giving us customisable ones.

I would honestly say this game is everything I’ve ever wanted from a Star Wars game. The galaxy really feels alive thanks to the beautifully realised locations, excellent voice acting and the expansive open worlds reminiscent of the MMO’s Star Wars Galaxies and Star Wars: The Old Republic. Unfortunately, this is a Lego game. For me, there simply just aren’t enough Lego elements in the game. Building has been restricted to chest-high wall covers, the occasional Minikit, and a special build or two, which for me is far too little.

If I was reviewing this game solely for the Star Wars elements, I would likely have scored Lego Star Wars: The Skywalker Saga much higher but the lack of building throughout the game was a real let down.

Do you agree with our lego Star Wars: The Skywalker Saga review?

Leave your comments below and let us know your thoughts!
0
What did you think of Lego Star Wars: The Skywalker Saga?x 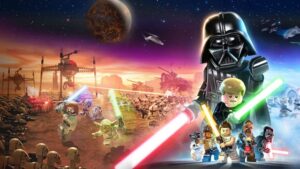 I agree with nearly everything said. The lack of a custom character creator is a real let down, it is a staple of lego games.

Lo Furneaux
Reply to  Jayden B

I’m really hoping they add it back in later since it was there initially! Fingers crossed they take the feedback on board

Great article… I’ve played some others on XBox and might pick up this one, too.

Let me know if it’s any different on Xbox! My brother has the PC version for his fancy setup and said it’s much smoother with less frame drops.

Loved the original PS2 game so am super excited to get my hands on this!

Hope you enjoy it!

I don’t even play a lot of games but a great review of Lego Star Wars , she really knows her stuff . Great conversation style .

Thanks Nik! Glad you enjoyed it 🙂