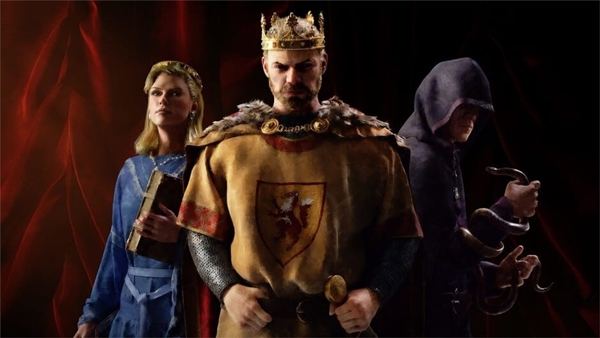 After dominating the grand strategy market for 20 years, Paradox Interactive has brought its flagship franchise, Crusader Kings, to the world of console gaming. The third installment (Crusader Kings 3) was recently released for the next-generation consoles PS5 and Xbox Series X and Series S, so naturally, I was intrigued to see if navigating medieval court politics from the comfort of my couch was any better than my computer.

For the uninitiated, Crusader Kings is a series of historical grand strategy games set in the Middle Ages. You play as the head of a medieval dynasty attempting to secure the family future by ruling provinces, waging wars, and betrothing toddlers. While a lot of players like to expand their kingdoms far and wide and paint the map by numbers, I prefer to treat the game like a dating sim, marrying each of my children to powerful families and watching as the world burns around them.

By its very nature, this historical spreadsheet simulator is a pretty niche concept for a console game. So, what does it bring to the table?

One of the major new features introduced in the console release of Crusader Kings 3 is the automated army. Whether you’re new to the game or, like me, you find the war mechanics to be cumbersome and a little confusing, there’s now an optional toggle for the AI to manage this for you. Switching on this setting lets the AI take control of all troop movements, sieges, and battles in either a defensive, balanced, or aggressive style. The only military decisions you’ll need to make from here are your choice of commander and the type of troops they’ll be leading.

Since I’m the proud owner of a first edition PlayStation 5, I really enjoyed the integration of the Dualsense 5 controller’s haptic feedback and adaptive triggers with the game’s stress mechanics. The controller physically reacts to each stressful decision, allowing you to really experience your character’s woes for yourself.

Though the reactive stress mechanics are great, Paradox has made the strange choice to remove the stress meter from its usual position in the bottom left corner. As of yet, I’m still unable to find its new location so I have to presume it’s either gone or hiding from me personally. This makes managing the mental health of your character much more of a challenge as there’s simply no way to determine how stressed they are at any given moment, despite how often the numerical values come into play.

Unfortunately, a menu-focused game like Crusader Kings 3 doesn’t lend itself well to the handheld control scheme used by consoles. Although the all-new gamepad support system was designed from the ground up, it sadly falls pretty flat. It feels clunky and unintuitive so it takes a long time to memorize, important information isn’t easily accessible so decisions are much harder to make, and maneuvering between windows requires a doctorate. It’s not all bad though, as the new touchpad timing controls make controlling your gameplay speed easier than ever before. Since I have the nasty habit of pausing time every time I need to concentrate, this was a welcome addition for me.

In true Paradox fashion, the console version is the most basic missing most of the DLCs, although it does seem like the content from the Northern Lords pack has been integrated into the base game. This means you have no access to the new Royal Court and if you were hoping to dress your ruler in the latest fashions from the Abbasid Court, you’d better cough up the extra money for the Royal Edition.

It seems to me that Paradox has an outdated view of their players. While their core fanbase will always be more concerned with historical accuracy, border gore, and map painting, the rest of us prefer playstyles focusing on the role-play and character aspects of the game. This misunderstanding of their audience means that the console versions are missing several features that I considered to be fundamental to the game.

The character search tool has vanished and there is no character creator to be seen, which for me is a fatal flaw that cannot be recovered from. A key element of my gameplay revolved around creating weird and wonderful people in the Ruler Designer. I enjoyed role-playing all different kinds of characters and watching their offspring’s genetic evolution over the generations. Now, there are fewer opportunities for creative play as I have no control over the composition of my character, which has really discouraged me from spending more time with the console version.

However, this pales in comparison to my biggest issue with this port – the user interface. On the surface, the UI seems no different from the PC version. Though Paradox have added radial dials for several of the menus in an attempt to streamline the gameplay experience, others are left to clutter up the screen endlessly. Multiple sections have been needlessly reorganized into new locations making it very difficult to find the menu you’re looking for and even though 99% of the game is text, there are absolutely no customization settings. This means you cannot change the text to a readable size for your flatscreen TV, which leaves the game barely playable for larger screens or bigger rooms.

Though the game plays much smoother on consoles than I thought it would and it makes nice use of the next-gen hardware features, the sheer lack of content means I’m very unlikely to choose this over the PC version. It seems Paradox was so concerned with attracting their shiny new console audience, that they didn’t stop to consider whether they even needed to.