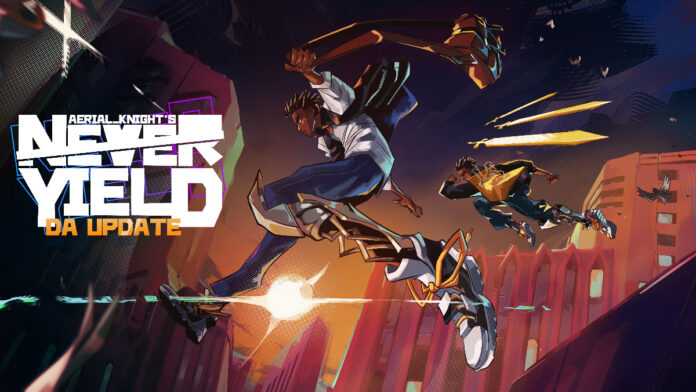 Headup and Aerial_Knight are pleased to announce that Aerial_Knight’s Never Yield is out on iOS and Android. This mobile version of the artistically exquisite narrative 3D runner includes the treasure trove of content recently added to PC and console versions of the game in “Da Update”. This free update is also available for PlayStation, with Nintendo Switch following soon.

Aerial_Knight’s Never Yield Out Now as it Sprints Onto Mobile

Selected as one of 2021’s games of the year by GamesIndustry.biz and Austin Creed for Giant Bomb, Aerial_Knight’s Never Yield is an accalimed 3D runner set in a sci-fi version of Detroit. The game tells the story of Wally and the sinister evidence he has uncovered with the potential to change his city forever. You will be forced to run for your life as you jump and slide to avoid upcoming obstacles with style to the incredible soundtrack created by Danime-Sama, showcasing the authentic sounds of Detroit artists along with the vocal talents of artists of color from across the globe.

Players who download Aerial_Knight’s Never Yield on iOS or Android today will find “Da Update” included, delivering huge improvements based on feedback to the original release. The update means the game launches with new bonus levels, new music, a brand new endless mode and the introduction of leaderboards to allow you to compete for high scores. Level and story updates aimed at adding refinement and intrigue to the core game, including a new post-credits ending, mean speeding through this sci-fi version of Detroit is slicker and more satisfying than ever before.

“It’s been the plan to bring Aerial_Knight’s Never Yield to mobile for some time, so I’m really happy to finally be able to deliver on that,” said creator Neil Jones, also known as Aerial_Knight. “I’m also really excited to bring Da Update to PlayStation players today after recently launching the update on Xbox and PC. With all the additional content and improvements added in Da Update, players can now experience the game at its absolute best”.

I might have to give this is a go!

I have downloaded this and will give it a play. Looks really cool and I do like a blast on a runner!