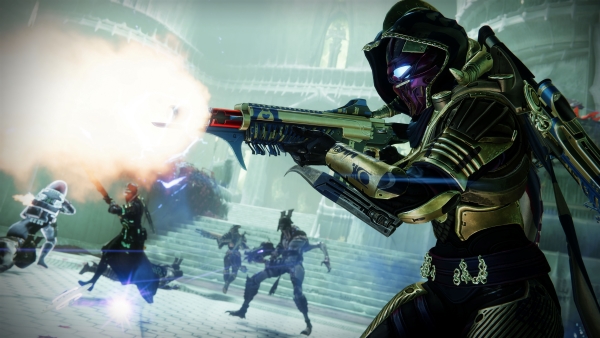 Today, Bungie has launched the latest chapter in the genre-defining Destiny franchise: Destiny 2: The Witch Queen on all available platforms. The first entry in the final trilogy of Destiny 2’s “Light & Darkness Saga,” The Witch Queen sees Guardians discovering powerful new abilities and facing extraordinary challenges as they protect the solar system from the enemies of humanity. In addition to the expansion launch, today also marks the release of a new Season of content with the arrival of Season of the Risen.

Destiny 2: The Witch Queen Available on All Platforms

Both The Witch Queen expansion and Season of the Risen will follow Guardians as they battle to take back the Light from the Hive god, Savathûn. After more than a year spent unraveling the deceptions of the Witch Queen, Guardians will take the fight directly to Savathûn as they explore the mysterious seat of her power, the Throne World, a new destination in Destiny 2. There, they will encounter countless challenges, including the emergence of the Lucent Brood, Hive enemies who now wield the same Light powers used by Guardians for centuries. In Season of the Risen, Guardians will use Light-suppressing technology granted by an uneasy alliance with the Cabal empress, Caiatl, to stand against the Witch Queen’s growing army of Light-infused Hive.

Shortly after the launch of The Witch Queen expansion for Destiny 2, Bungie will unveil its latest raid, a Destiny pinnacle aspirational achievement designed for six skilled Guardians who want to be challenged not just for their fighting skills, but their ability to work cooperatively, think on their feet, and solve seemingly impossible challenges.

The Vow of the Disciple raid will launch for all The Witch Queen owners on March 5 at 10 AM Pacific (18:00 UTC). With the launch of the raid, Bungie will also kick off its worldwide competition to crown the first fireteam in the world to complete the raid. The confirmed winning fireteam will win one-of-a-kind World First title belts for each fireteam member along with the glory of being awarded the World First title. Look for the official announcement of the winning World First team in the days following the launch of the raid.

Savathûn’s deceit has been exposed and Guardians prepare for a showdown with the Witch Queen, to face her Light-wielding allies, and fight to take back the Light.

Lucent Brood: Savathûn has gifted her soldiers with the powers of the Light. Guardians will now face enemies who can resurrect, wield powerful (and familiar) Supers, and more.

Weapon Crafting: Guardians will use Deepsight to craft and upgrade an array of fearsome weaponry. Master the system to create your customized weapons with unique combinations of shaders, mods, and advanced stat pools.

The Glaive: A formidable first-person melee weapon that packs a punch up close and at range. This new weapon type can also deploy a powerful energy shield to protect its wielder.

The Throne World: A new destination in Destiny 2, the Throne World is the seat of Savathûn’s power, a twisted wonderland of corruption and splendor. Here, Guardians will seek the truth and learn that mystery makes a home in both the Darkness and the Light.

Wellspring: A new six-player matchmade activity is at the heart of the ongoing struggle for control of the Throne World.

New Raid – Vow of the Disciple: Among the swamps of Savathûn’s Throne World lies a sunken Pyramid. Guardians will gather their fireteam and confront the ancient danger that lies within.

Season of the Risen

The new Season of Destiny – Season of the Risen – begins on February 22, and players can begin earning new Season Ranks immediately. This Season, Guardians will work with the Cabal empress, Caiatl, to foil Savathûn’s plans and defy the Light-wielding hordes of Lucent Hive that threaten humanity and the solar system. The Season includes:

PsiOps Battlegrounds: Guardians will track down and capture high-ranking Lucent Hive lieutenants across the system. With the aid of Caiatl’s most trusted Psions, players will enter into the Mindscape, a psychic plane where thoughts manifest to reality. Cut through the horde and defeat Savathûn’s lieutenants to achieve victory.

Seasonal Artifact – Synaptic Spear: Powered by Caital’s technology, utilize the Spear’s Light-suppressing technology to enter the minds of the Witch Queen’s Hive Guardians and destroy their connection to the Light. Level up the spear to access powerful new mods and customize your playstyle.

Exotic Quest: Investigate Psionic anti-Caiatl propaganda emanating from a bunker on Mars and unlock the Exotic Grenade Launcher, Dead Messenger. This wave frame breech Grenade Launcher generates a fan of three waves of impact and can rotate elemental damage types on reload, similar to other Exotics like Hard Light and Borealis.

All Destiny 2 players will be able to experience the free update to Void 3.0 arriving to coincide with the launch of The Witch Queen expansion and Season of the Risen. The latest upgrade to Destiny 2’s elemental power set adds Aspects and Fragments to the Void subclass, similar to Beyond Light’s Stasis subclass.

Destiny 2 is free to play and includes many of the new features being launched with Season of the Risen, including the Void 3.0 subclass update, Guardian Games 2022 event, access to the intro mission to The Witch Queen expansion, and more. Season Pass holders have access to all activities with additional premium rewards and instant unlocks:

Purchase the Season of the Risen Silver Bundle and receive the Mental Manifestation emote along with 1,700 Silver (1,000 + 700 bonus Silver) which you can use to purchase Seasons, cosmetics, and more.