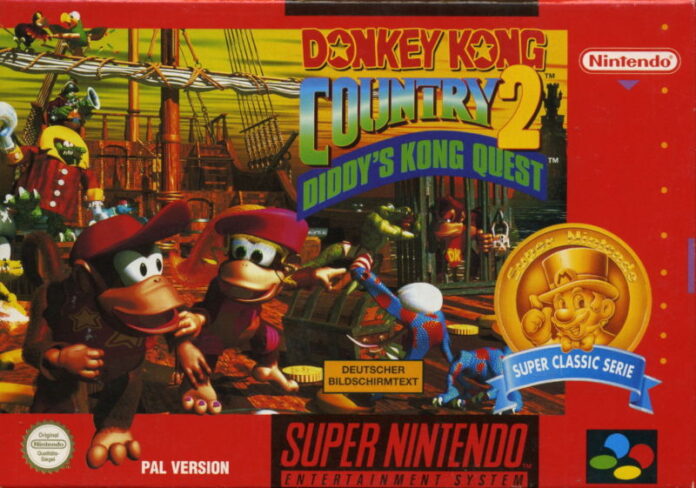 Gaming has a rich history that spans multiple decades. To this end, The Last Word on Gaming Backlog is a series that looks back on titles across all generations. From the golden 8-bit era to the landscape-changing 64-bit scene and beyond, The LWOG Backlog’s aim is history. Traverse Crocodile Isle in search of a missing friend in the Super Nintendo sequel title known as Donkey Kong Country 2: Diddy’s Kong Quest.

It’s not a stretch to call the original Donkey Kong Country one of the best Super Nintendo titles. Not only did it push the 16-bit platform to higher levels from a presentation standpoint, but it was able to perfectly balance tight, challenging gameplay with undeniable charm. As such, it was fair to say that a sequel wasn’t a matter of if but when. Enter Donkey Kong Country 2: Diddy’s Kong Quest. Once again developed by Rare and published by Nintendo, this title was released during the tail-end of 1995.

Diddy’s Kong Quest endeavored to build upon the first title’s engine and gameplay philosophies while also introducing numerous changes. From the omission of Donkey Kong as a playable character to increased difficulty to a number of hidden goodies throughout different levels, this sequel’s scope was far greater than the original Donkey Kong Country. How does the sequel hold up in general, though? Without spoiling too much, rest assured that this is a rare case when the direct follow-up is just as good as, if not better than, its original.

Following the events of the first game, Donkey Kong is resting on the beach, indulging in a banana milkshake and soaking in the sunshine. After he goes missing, however, Diddy Kong becomes concerned. Alongside Dixie Kong, making her first appearance in the Donkey Kong Country series, Diddy discovers that DK has been kidnapped by the Kremlings, led by Kaptain K. Rool, formerly known as King K. Rool from the first game. Together, Diddy and Dixie Kong set out to rescue their captured friend and defeat K. Rool once more.

Though the absence of Donkey Kong, as a playable character, may be a sore point for some, this helps to expand the lore of the series. This is done by introducing new characters, such as Dixie Kong, as well as providing the player with a brand new world to explore courtesy of Crocodile Isle. Throw in a healthy supply of new enemies, as well as allies, and it’s easy to see that Diddy’s Kong Quest builds upon the foundation of the first Donkey Kong Country game.

From a gameplay standpoint, Donkey Kong Country 2: Diddy’s Kong Quest is very much in line with the first game. This 2D platformer tasks the player with moving through multiple levels, taking down enemies, collecting items, and reaching the goal. However, there are a few changes to the formula worth noting. First, as a playable character, Dixie Kong is unique from Diddy. While Diddy benefits from heightened agility, as he did in the first game, Dixie can hover through the air using her banana-shaped ponytail. This brings a new level of strategy to the game, giving players options as to how to tackle certain areas.

Collectibles have been expanded upon in Diddy’s Kong Quest, too. In addition to the standard 4 “KONG” letters, treasures in the form of coins can be found. These have different uses, too, such as the currency-esque Banana Bunch Coins and the Kremcoins which can be given to the imposing Klubba to further explore Crocodile Isle. While it’s not necessary to collect each coin, doing so opens the game further, allowing the player to see everything that it has to offer. Certain coins can be tricky to collect, which only adds to the heightened difficulty Diddy’s Kong Quest is known for.

Donkey Kong Country 2’s level design is certainly a step up from the previous game, too, such as swimming through cooled water before it heats back up or navigating pools of lava without falling through. Level design is further complemented by the inclusion of new animal friends. Rattly the Rattlesnake, for example, excels at vertical movement while Squitter the Spider can use his webs for platforming beyond the beaten path. Finding these animal friends isn’t always straightforward, but when they’re found, it’s incredibly rewarding.

While its predecessor was an impressive visual outing for the SNES, Donkey Kong 2: Diddy’s Kong Quest is arguably more impressive. Animations are noticeably smoother, but the use of effects such as fog and storms take this game’s graphics up a notch. In fact, given how graphically intense this game can be, the fact that it runs at a smooth pace is a technological feat in and of itself. When ranking the best-looking SNES games, room should be saved at, or at the very least near, the top for Diddy’s Kong Quest.

In regard to audio, Donkey Kong Country 2 is just as impeccable, featuring a number of memorable tracks. “Jib Jig,” which is the first level tune, is mellow and adventurous at the same time, setting the tone for the rest of the game. “Stickerbrush Symphony,” which was revisited for Super Smash Bros. Brawl on the Nintendo Wii, is another standout. In fact, the entire soundtrack is impressive, bringing ambiance and memorable beats together. David Wise returned as this game’s composer, producing some of the best music on the SNES.

Donkey Kong Country 2: Diddy’s Kong Quest, when rushed, isn’t a terribly long game. One shouldn’t be surprised to see the end credits in anywhere from 4 to 5 hours if their goal is a straight shot. However, several hours can be added onto this time, which speaks to the game’s replayability. By collecting Kremcoins, as mentioned earlier, the player will be able to access different levels which are part of The Lost World. These will help the player reach 102%, or full completion, which leads to the best ending that can be gained. Diddy’s Kong Quest is a game with substantial meat on its bones.

Following its release, as well as in subsequent years, Donkey Kong Country 2: Diddy’s Kong Quest received near-universal acclaim. Across the United States and Japan, it sold well over 4 million units. It also became the sixth best-selling SNES game, sharing rarefied air with the likes of The Legend of Zelda: A Link to the Past and Super Mario World 2: Yoshi’s Island. Diddy’s Kong Quest has been regarded as the best game in the original Donkey Kong Country trilogy, and given the advancements it made over the original, it’s easy to see why.

Over the years, Diddy’s Kong Quest found itself onto the Wii and Wii U Virtual Console services, as well as the Game Boy Advance via a 2004 port. The year after its SNES release, it was followed by the third, and final, entry in the trilogy, though this is a story for another time. It’s been said that the SNES is home to some of the best retro titles, and while it certainly has considerable competition in the 2D platforming genre, Diddy’s Kong Quest remains a must-play.