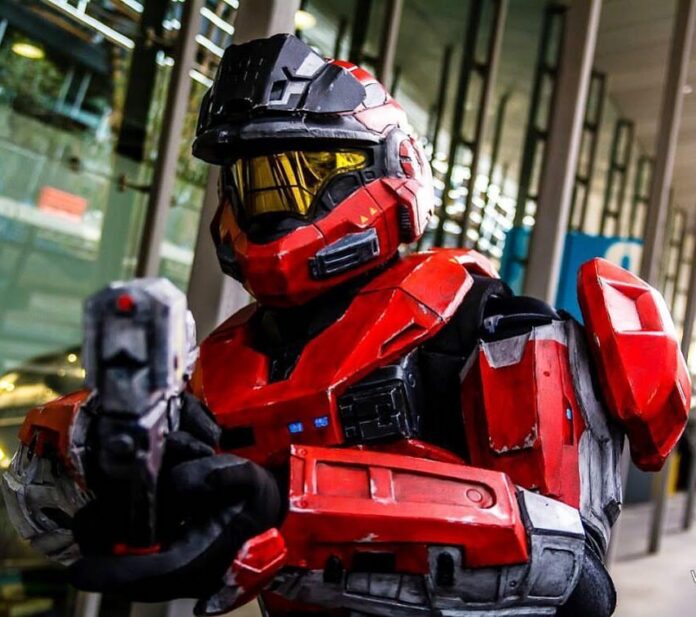 The long-awaited next chapter in the Halo franchise, Halo Infinite released on December 8th 2021. To celebrate the release of the game, we talked to several Halo cosplayers.

In this edition of Last Word on Gaming’s video game cosplay series, you can learn more about their costumes and their love for the Halo franchise.

“It all began with Youtube, going down a rabbit hole I stumbled across a video by Kamui Cosplay, a German creator who built a Star Wars Tie fighter pilot helmet out of EVA foam. I had seen costumes and things at Comic-Con but had no idea how they were made. After seeing this video I had to know more. So I started on a cosplay binge on YouTube and the more I saw the more I realized I could do this! The hunt was on for a character that I could recreate and Batman was the obvious choice. I downloaded Pepakura designer and searched for a pattern online and found one based on the Batman Origins game. I bought some foam floormats and got into it. Working on the suit after work and on weekends when I could, and three months later I was Batman!”

What Inspired You To Cosplay The Master Chief?

It was actually a friend of mine who is a massive fan of Halo and lore who suggested it when they saw the Batsuit. Their excitement for it and the suggestion that I could also make UNSC Marines costumes to make it a group cosplay got me a little excited too so the process started all over again with the research and grind to get these suits done.”

“The Mjolnir armor started with the helmet which took a month and the rest of the suit took another six. the marines armor took around three months initially but one of the marines costumes actually had to be made twice because one of my young friends who I made it for went through a growth spurt and didn’t fit it anymore. Good thing I find this sort of thing fun.”

“The creative process is a whole lot of research and trial and error. I downloaded a ton of images to get as much detail as possible from every angle. I then tried to work out how to cut the foam to suit the pattern and shape it to get it as accurate as it can be. Especially with the helmet because it’s the face of the character and fans of the game would see any discrepancy and it wouldn’t feel right. Lots of glue fumes and scraps of foam then more fumes from the Plasticdip. Protective gear is a must.”

“The most fun was in custom Reach forge matches, playing games like Jump Rope and Janga with friends which would always devolve into chaos and laughs. In Jump Rope it was fun trying to get the wraiths to spin out of control scaring the crap out of the jumpers. After all of that I just absolutely love the story, the war with the Covenant, becoming an ally and perhaps even friends with the Arbiter to watching Cortana’s descent into rampancy, simply an epic tale.”

You can keep up with Cmdr_Dark_Light and other Halo cosplayers on Instagram.

“I’ve always been a really creative person. My parents are both super hands-on in terms of creating things and it was encouraged from a very early age to just make a mess and be creative. My Dad is a handyman so he does all sorts of construction and painting and my mum was a graphic designer and likes to make her own clothes so it was basically the perfect storm. I can’t remember a time where there wasn’t an ongoing project in the house that I got to be a part of. I also got into gaming early when my parents bought my sister and me a computer and a PlayStation, I also had handheld gaming too. So I grew up creating and also being immersed in gaming and with sci-fi and fantasy film and television.”

“It was nearing midway through and towards the end of my high school experience when I kind of really started entertaining the idea of actually creating cosplay as opposed to just like Halloween and costume party costumes that mum and I had dabbled with previously.”

“I’d never been to a convention before, and I can so clearly remember sitting in my IT and Robotics class in like year 9 with my friend who liked Halo as much as I did and stumbling across the 405th Halo Costuming Forums, and from there it just all clicked. I spent a good while researching and learning how to make armor costumes before diving straight into Halo 4 Master Chief as my first project. Which in hindsight? Go big or go home I guess? Very on-brand for me to pick something challenging for my first attempt and here we are 10 years later and I’m still doing it.”

What Inspired You To Cosplay A UNSC Marine?

“To this point, I’d made so many bulky Spartan and ODST costumes which are not exactly easy to walk around in and can get really hot. I just decided I needed something more suited to summer over here in Australia and it just seemed perfect. Plus it is just SO iconic to the franchise and had been on my list for a while.”

“The creative process for all my costumes is pretty much the same. It starts with an all-consuming drive to make something. I just become obsessed with the idea of the costume and spend a good lot of hours gathering as many references as possible. Concept art, official character art, in-game screenshots, 3D references, etc. Honestly just folders of photos of every angle imaginable. Once I feel pretty comfortable with how the costume looks I begin shopping for materials and anything that exists in the real world that I could use on the costume.”

“For the Marine, I spent about 4 days straight trying to find the perfect camo uniform, and belts and boots, etc. Once I’ve got everything ordered and while I wait for shipping – I’ll begin making templates for anything I have to create from scratch. If It’s fabric stuff I’ll start making patterns and calico mock-ups either from existing patterns or clothing or I’ll use the tried and true cover yourself in cling wrap and duct tape and then draw it on with a marker method. And if it’s hard armor stuff I start looking into finding any 3D models that I can use to make foam templates from or detail up and turn into 3D printable files. If there’s nothing preexisting 3D-wise I’ll either model it myself in Blender or make good old cardboard and paper physical mock-up of things.”

“I’ll go through a stage of mock-ups with fabric and also paper size tests for any armor pieces to make sure things are proportionate on my figure, this something takes a lot of tweaking, but thanks to programs like armorsmith it can be pretty fast and simple. Then from there, I’ll just start making, and I always start from the ground up – Literally. The first thing I build is always the shoes, and I work up to the helmet last. My theory on that is that you are always improving as you make it, and the thing that is going to be looked at the most is always going to be the face and the shoulders. So I want my best work on the costume to be that.

Once everything is made you can clean it up and seal it for painting, which again I do from the ground up. It’s pretty involved, and I make a lot of dumb mistakes on every costume that I look back on and just think why on earth did I do it that way? So it’s always a learning process and you just keep carrying it forward.”

“Honestly, I have so many favorite Halo moments and memories that it would be so hard to narrow down just a handful. Halo has been such a large part of my life for a very long time and I’ve been really blessed to meet so many great people through playing Halo, and making Halo costumes that it’s honestly all a highlight. But the greatest thing Halo has given me is the community of people I get to call my friends, people from all over the world who just fill my life with so much joy. People who are so talented at what they do and so generous with their time in teaching, be it sick gamer skills or just new cosplay skills I hadn’t even thought of.”

“I started cosplaying about 11 years ago. What inspired me to start was the fact that I wanted to become my favorite character and be able to look into a mirror and be like “wow! I made this myself”. I would always make my own costumes with things I found around the house (as kids do).”

What Inspired You To Cosplay Cortana?

“I remember seeing Cortana for the first time in a gaming magazine years ago when I was a child. It was love at first sight you could say. I fell in love with Cortana’s look in Halo 4 and, now that I’ve finally got around to actually doing it, I think little me would be proud.

“Making this costume was a huge challenge for me. I started off with buying a suit and it was a great base to start with. To get that suctioned cup look I had to install fake breasts that were made out of thermoplastic. It was definitely a difficult process but, entirely worth it!”

You can keep up with RyleeMichelleHall and other Halo cosplayers on Instagram.

“I started cosplaying back in 2018. I really had no clue what I was doing I saw a YouTube video and decided I want a set of ODST armor since Halo is my favorite game. Then I just started cutting away at some EVA foam. Over time I started to join Facebook groups to learn more, eventually finding the 405th which is a Halo cosplaying group that I became a part of. There I learned so much while making new friends”

What Inspired You To Cosplay An ODST Soldier?

“My ODST has gone through many different transformations over the years. I’ve constantly added to it to the point where EVA is not the main component anymore. It’s cast, PLA 3D printed parts, EVA foam, and vacuum-formed pieces. Along with it, I have many weapons from the Halo universe I’ve made most recently a 1:1 Needle Rifle with LEDs. Up next will be a jet pack.”

“The best Halo moment (for me) would be the first person view of the drop pod in Halo 3 ODST.”

You can keep up with RTV Cosplay and other Halo cosplayers on Instagram.

Keeping Up With Halo Cosplayers and More

Keep up with Halo cosplayers on their respective social media accounts. Check out my own cosplay at ArcticBlastCosplay and the wrestling articles I write for LWOPW here.

Microsoft To Acquire Activision Blizzard for a Reported $68 Billion