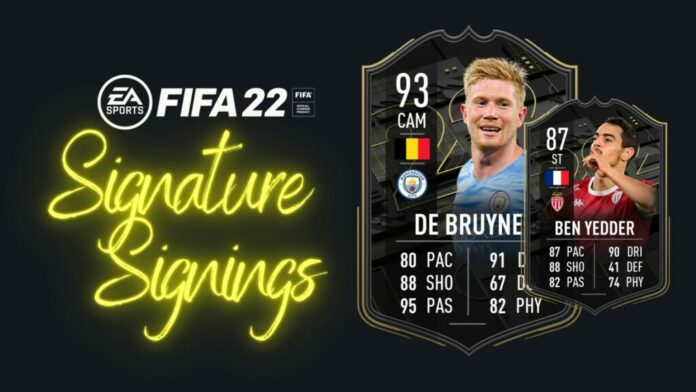 EA have decided to give back to their fans in FIFA 22, and in the holiday of great deals, Black Friday, FIFA have brought along a new promo to complement their yearly Best of TOTW release.

The Signature Signings promo features 11 new players added to packs, which celebrate some of the most successful transfers in recent football history.

Kevin De Bruyne’s new 93 rated CAM card is now one of the best attacking midfielders in the game, whilst the lesser-known Marcus Edwards is a brilliant English RW from the Liga Nos, offering up even more squad building options.

Edwards’ card is particularly of note as he was boosted eight ratings, taking him from obscurity to complete usability.

The issue with these promos however is the repetition of the same cards every year.

Here we have yet another Ben Yedder card that will terrorise defences, as well as overpowered Youssef Atal and Renato Sanches cards.

Fans are crying out for a diverse array of cards, one’s that we have never seen on FIFA before.

Most recently we have seen the Squad Building Foundations be released, and despite not being a promo, it has so far been the most well-received event of the year so far.

More off-league meta cards are needed to maintain engagement in a game that has the potential to put people off earlier than it ever has.

The announcement of Generational Talents such as Pulisic and Foden who will be given minimal boosts has not been met favourably by fans either.

The Last Word on Gaming’s Viewpoint

The Black Friday Promo is EA’s way of crashing the market. This year however, the market is already lower than it has ever been. Players will however enjoy packing the new cards in an attempt to make a few coins here or there.