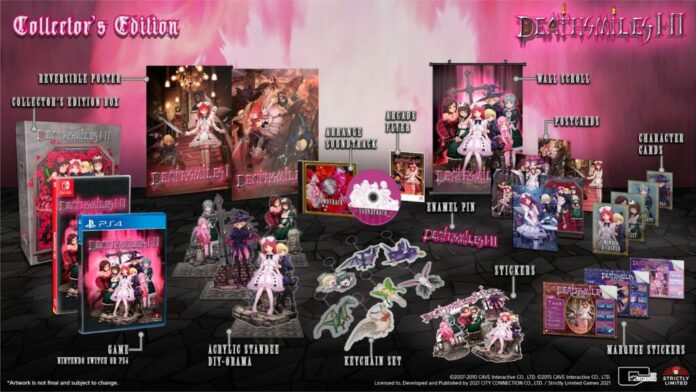 PS4 and Nintendo Switch owners will soon be able to get their hands on Deathsmiles I-II when the game is made available for pre order from November 7th via Strictly Limited Games.

The game will be a limited release and both versions come with a manual and will retail for €49.99.

For the serious collector there is the collectors edition that is packed with all sorts of goodies along with the physical boxed versions of the game;

The Collector’s Edition is available for 89,99€ and limited to 2,200 copies for Nintendo Switch and 1,000 copies for PlayStation 4 – each comes individually numbered.

Deathsmiles I-II is a gothic style game with a sinister presentation style where you will enter the world of Gilverado, a Kingdom plagued by hideous monsters and oh so tortured souls. You can choose which angel you will fight with and use various powers and power ups to try and defeat the barrage of enemies that will come at you from Hell’s gates. This is not a game for the feint hearted.

Created by developer CAVE this package brings you plenty of side scrolling Shmup action and will test your hand eye Co ordination to the limit. With eye catching presentation and fast action, this is one package fans will not want to miss out on.

Don’t forget that you can catch up with all the latest news, reviews, industry analysis and much more with Last Word on Gaming at our website, Facebook and Twitter @LWOGaming pages.