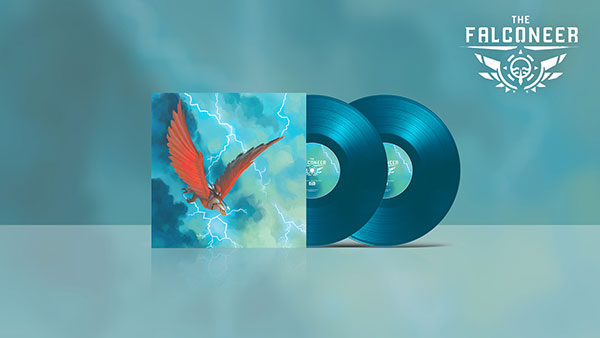 Following on from the success of the game there is now the chance to pre order The Falconeer Double Edition Vinyl which is coming from Wired Productions and Limited Run Games as part of an exclusive range with Wired setting out to publish games soundtracks on vinyl.

The Falconeer is such a beautiful game full of personal expression and innovative game design from just one person. Tomas Sala created aerial dogfights aboard a giant warbird, an oceanic world that is simply stunning and enchanting and is one of the best looking games of the year. Add to that the stunning soundtrack and it is easy to see why it will make a great collectors item to own this double vinyl.

This double vinyl is a purely limited edition very much focused on collectors and there are just 1000 pressings so you will need to act quick if you want to pre order this special album.

The vinyl double album has been mastered by Benedict Nichols and features two additional tracks that are totally exclusive and not available anywhere else. Those tracks are Arun’s Folly and The Door to Nowhere which features Tegen Hitchens.

“An Eclectic Cathedral of a Soundtrack”

The press release for the album describes it as being ‘an eclectic cathedral of a soundtrack’ evoking the feel of the game and taking the listener through relaxing oceanic sounds to sky battles and back again delighting the ears.

“I’m delighted that The Falconeer is getting the Deluxe Vinyl album treatment. It has been an honour to join Tomas on this journey through the Great Ursee, and to create such an impactful soundtrack for players to enjoy”.

The Falconeer gatefold sleeved Double Vinyl soundtrack is available to pre-order now from the Wired Productions store for £34.99 and Limited Run Games for $44.99.

I just love vinyl and gaming soundtracks so this is something I am really looking forward to and want to see more of. If you were to say to many people that gaming music is amazing then I suspect that some will say they can’t believe it but if you look it is out there and game composers are some of the finest there are.

Are you a games soundtrack fan? Have you played The Falconeer and going to pre order the vinyl? Why not leave a comment below and join other Last Word on Gaming readers and our team of writers in discussion.