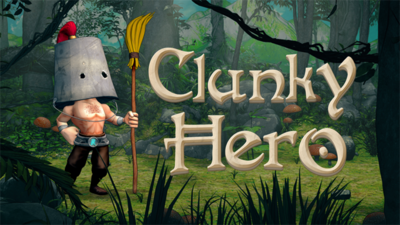 In the second game developed by Chaosmonger Studio, Clunky Hero will be coming to Nintendo Switch, Xbox and PlayStation in Q1 of 2022 and Windows, Linux and Mac on November 9th 2021.

Main character Rufus’ wife has been kidnapped and he is desperate to get her back armed with just with a bucket and a broom making him a Clunky Hero. Expect plenty of laughs, action and mystery with this one.

The game is story driven and the press realise described the game as am ‘innovative take on the metroidvania genre.’ With side quests, weapons to discover, taking on bosses in a rather bizarre world you will need to craft the Evil One and bring Rufus wife back home.

Clunky Hero will come to Steam for early access on November 9th and Chaosmonger will be suing this time to gain feedback on this quirky looking title.

CEO of Chaosmonger, Nicola Piovesan is really looking forward to the game and said;

“I’m very excited for the Early Access of Clunky Hero! The game development is yet to be done, but the gameplay should keep players busy for at least 8 hours of fun, in which they can complete the story, even if a tiny bit shorter than in the full version. We are really looking forward to the players’ feedback and suggestions, since they will help us improve Clunky Hero, to make it bigger and better, in every aspect.”

Is this a game you have your eye on? Why not get in touch with Last Word on Gaming or leave a comment about your thoughts on this game.